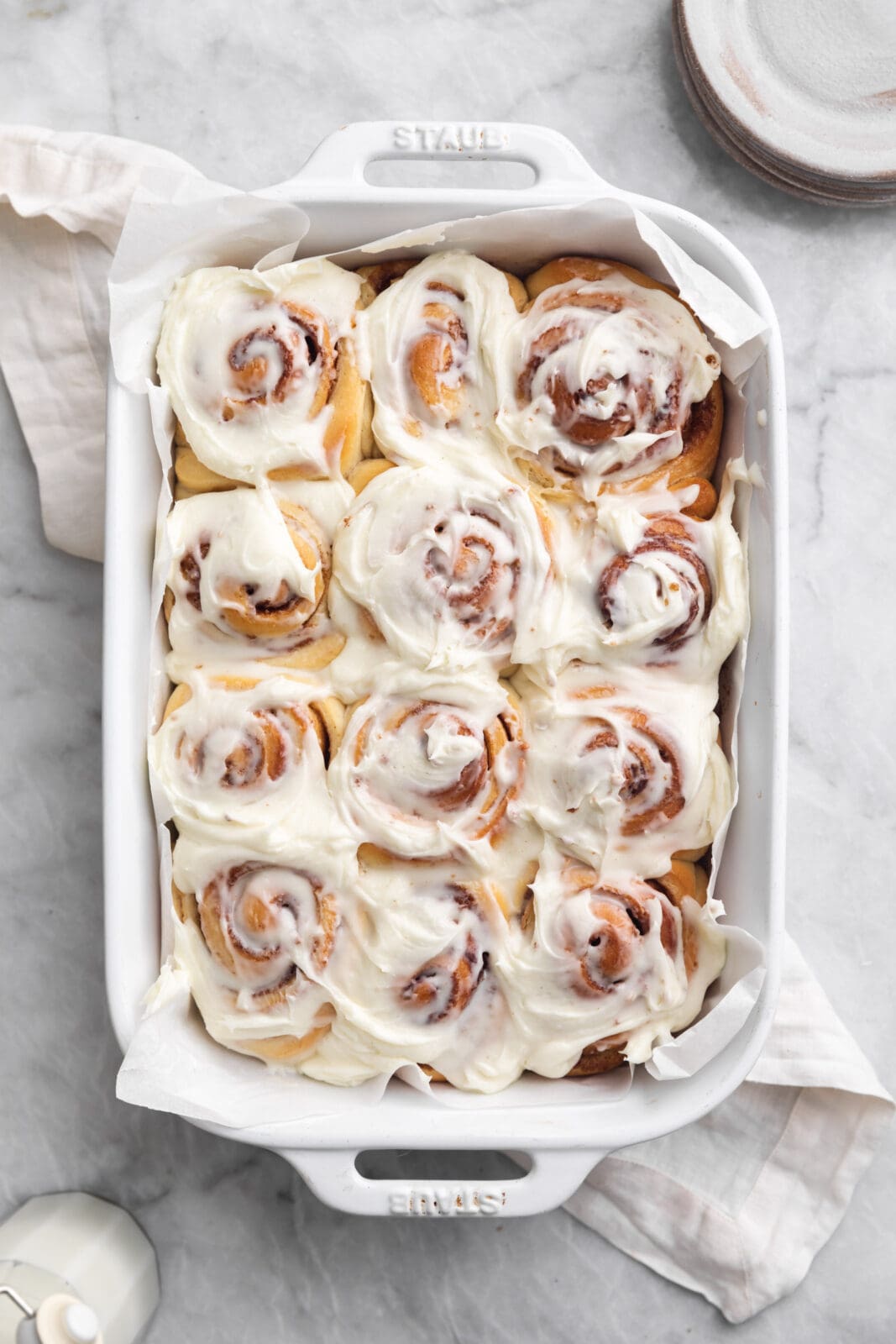 There is nothing better than pillowy soft, gooey-in-the-middle, smothered in cream cheese frosting, homemade cinnamon roll. These perfect cinnamon rolls taste even BETTER than Cinnabon.

Let’s set the scene. I’m 11 years old, at the mall leaving The Limited Too with my mom. She just bought me the coolest bedazzled dress and glitter flared jeans (which I will wear together obvi). We’re walking towards Macy’s when the enticing scent of fresh baked Cinnabon wafts over. I have to have one. So I beg my mom.

My mom is the BEST, so the two of us get one for dinner.  The perfect day: a new outfit for my 6th grade dance and a Cinnabon–truly is there anything better than this?

And the only thing better than a warm Cinnabon is a warm HOMEMADE cinnamon roll with a gooey center and luscious cream cheese icing. 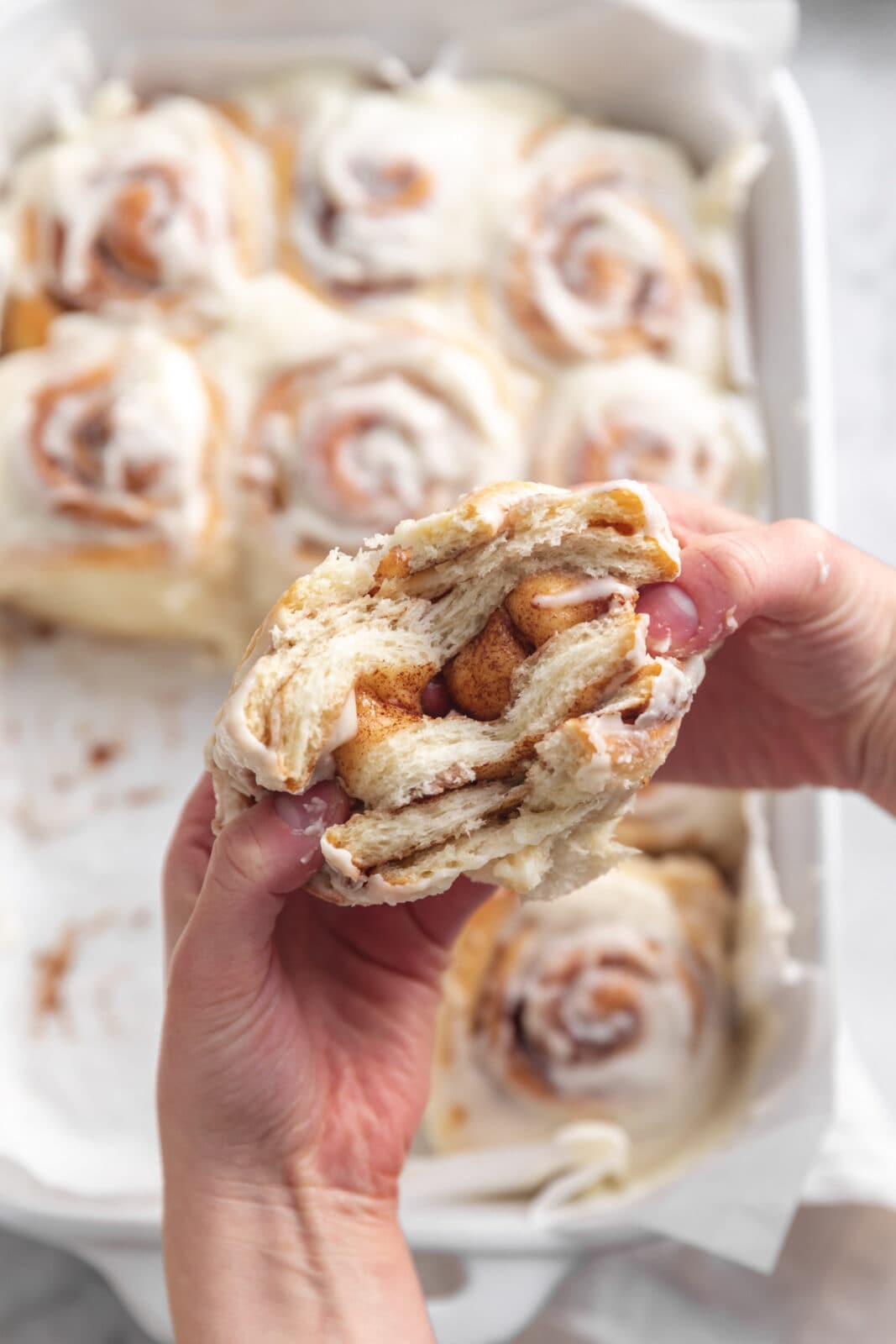 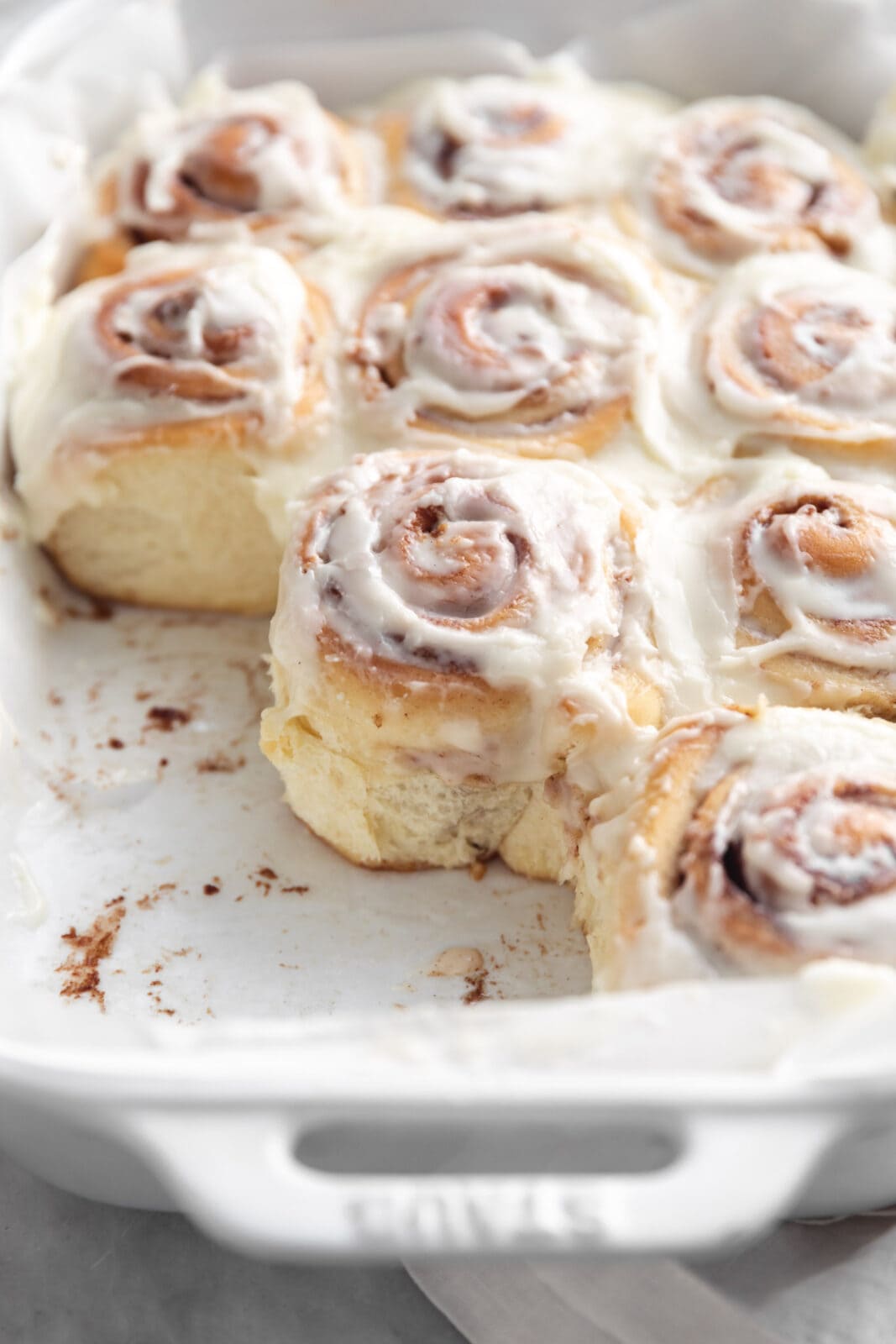 How to make homemade cinnamon rolls

Cinnamon rolls are a more involved process than your standard chocolate chip cookie or muffin recipe…I get it. It can seem a little daunting. But luckiyl we’ve broken everything down for you so you’ll be a homemade cinnamon roll baking pro!

Cinnamon rolls require making three components (dough, cinnamon sugar, and cream cheese frosting) and this homemade cinnamon roll recipe needs 2 rises so you’ll have to be a little patient too. But isn’t that the fun in baked goods sometimes? Cinnamon rolls are a special treat and all that extra work and love makes them even more delicious. 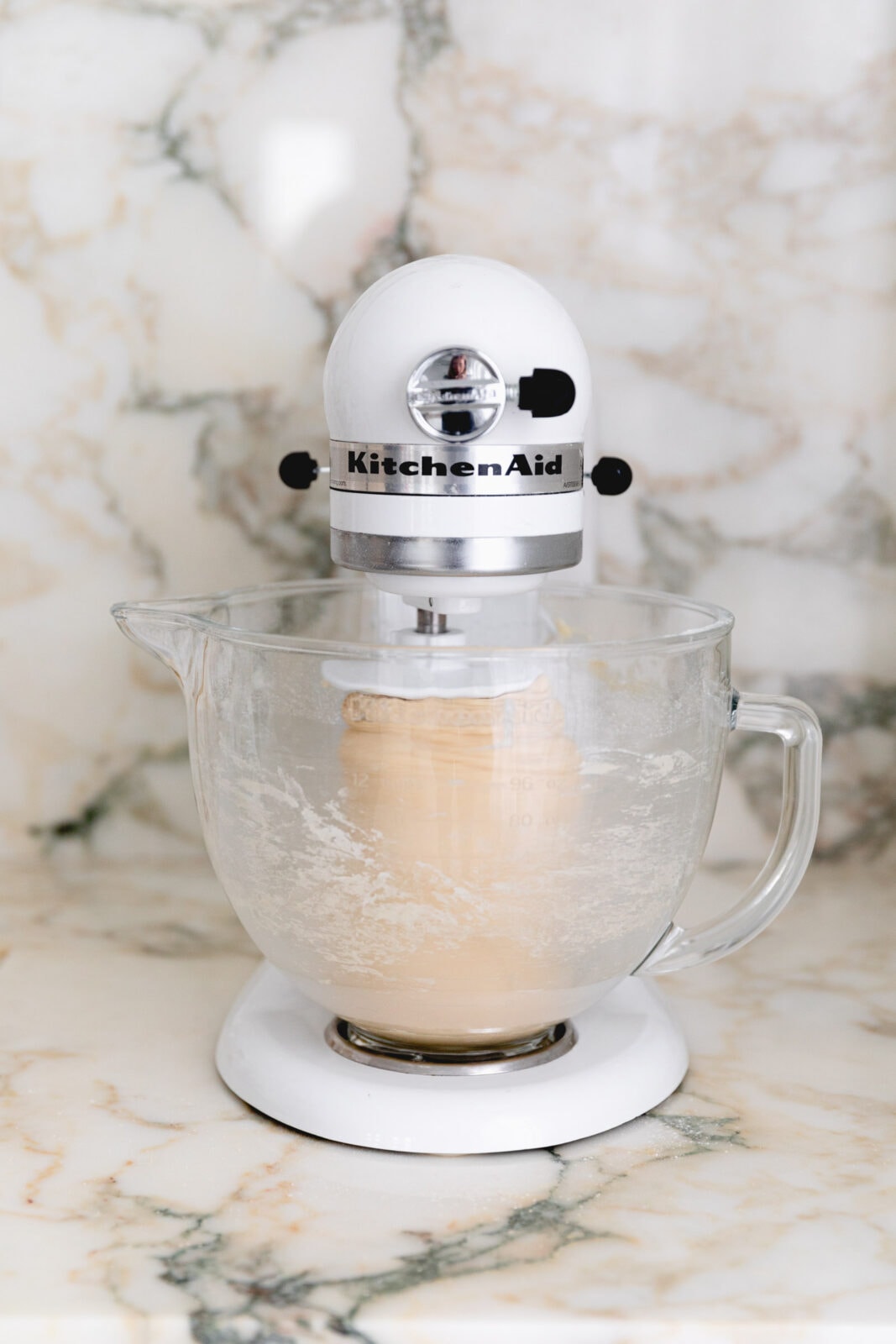 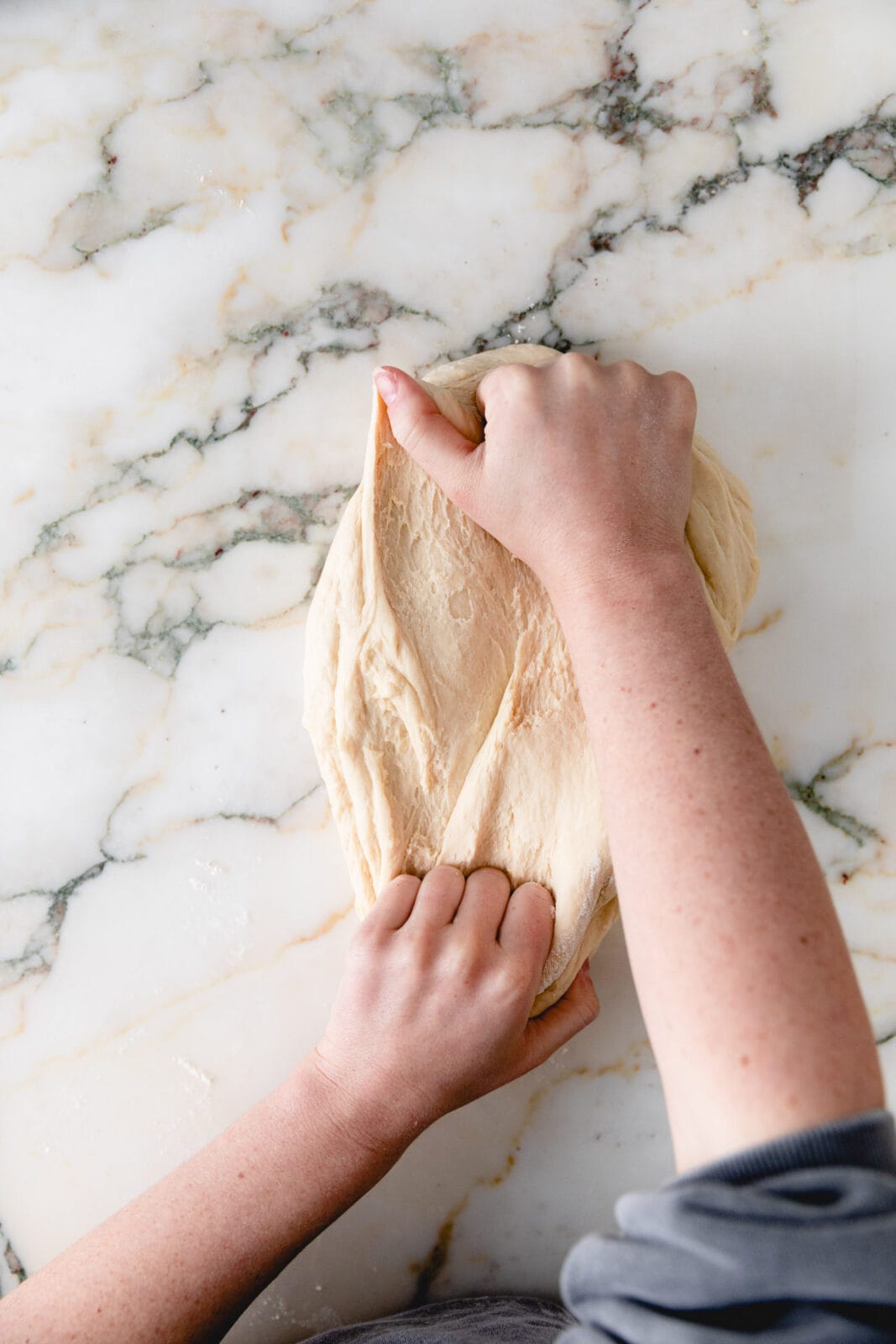 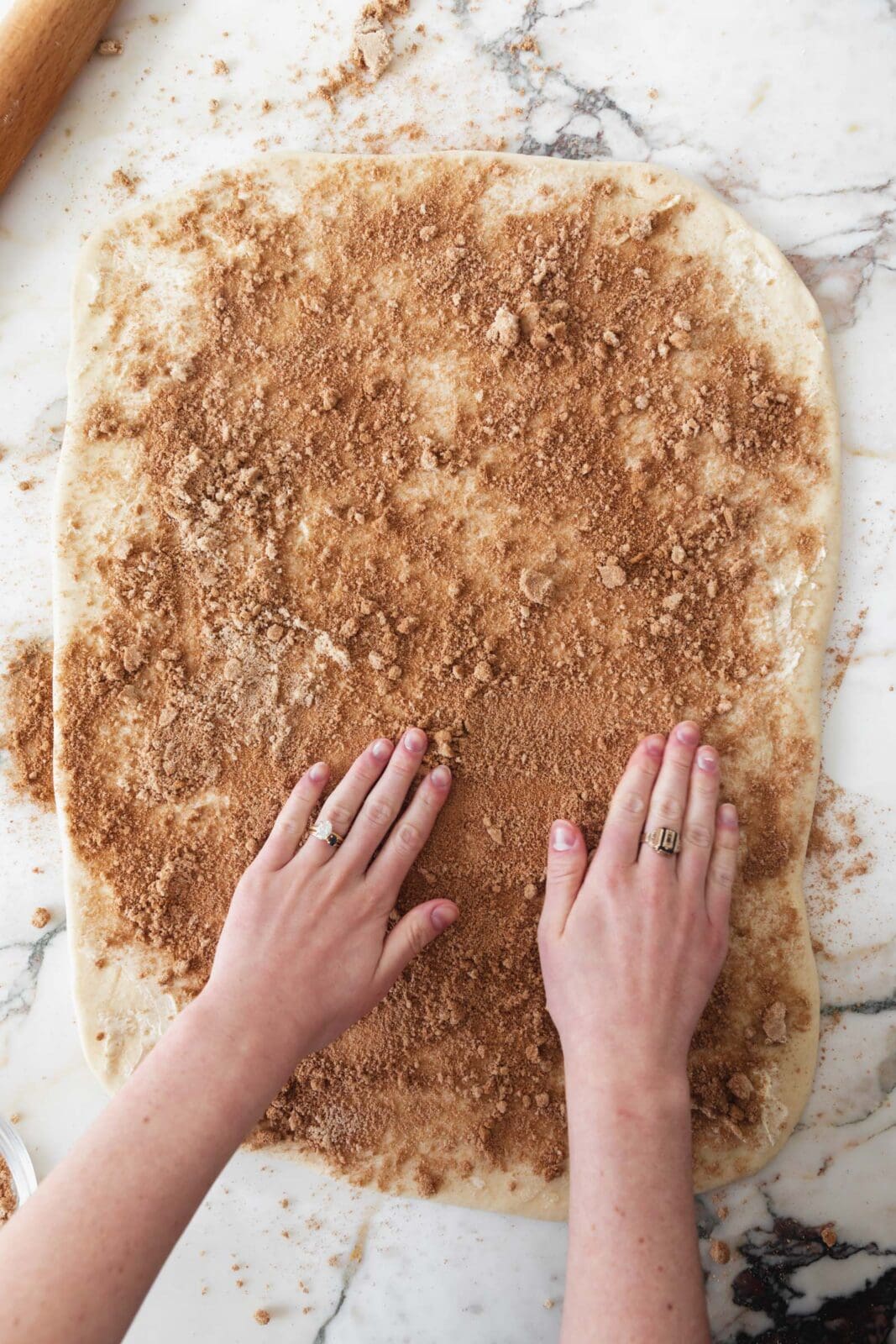 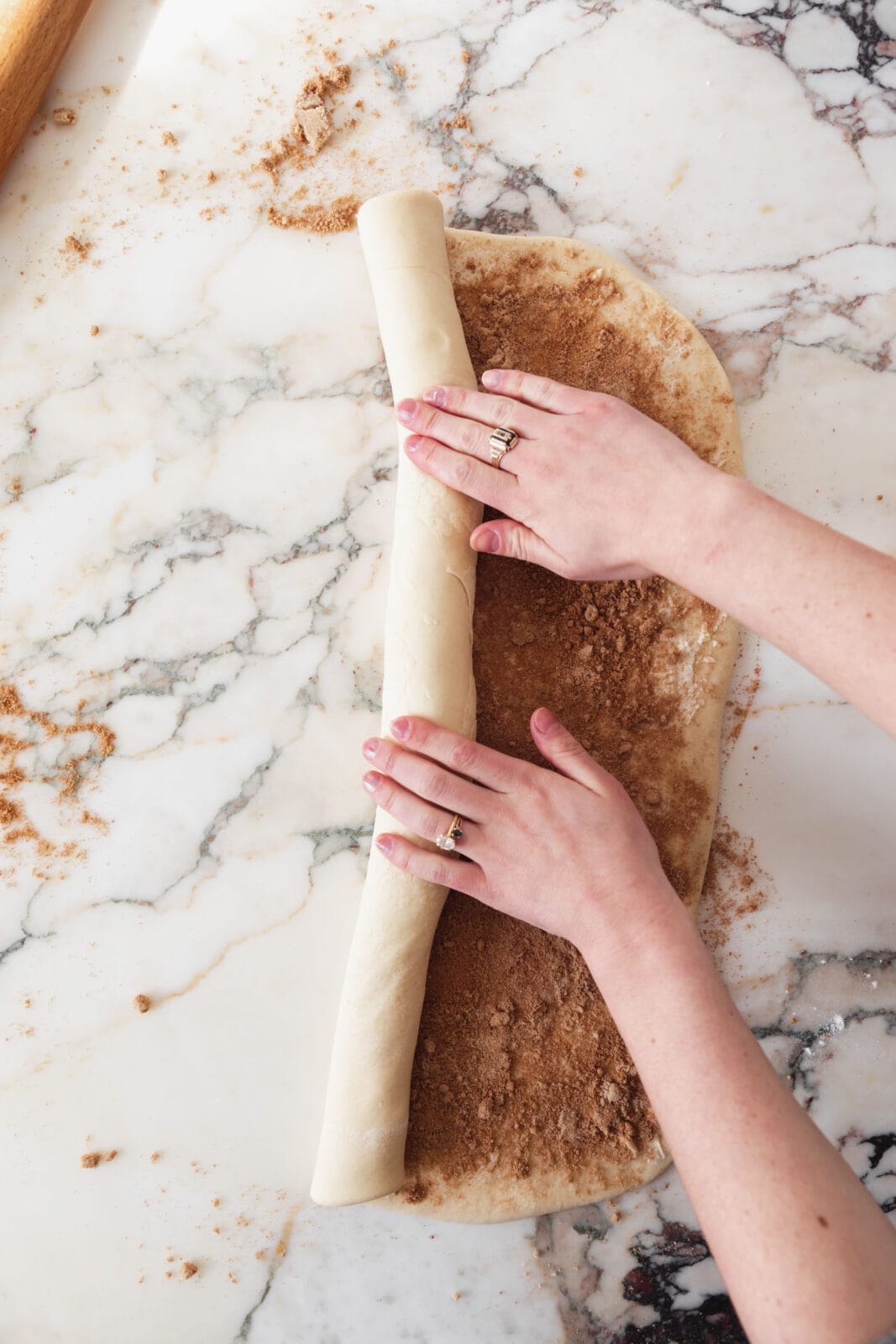 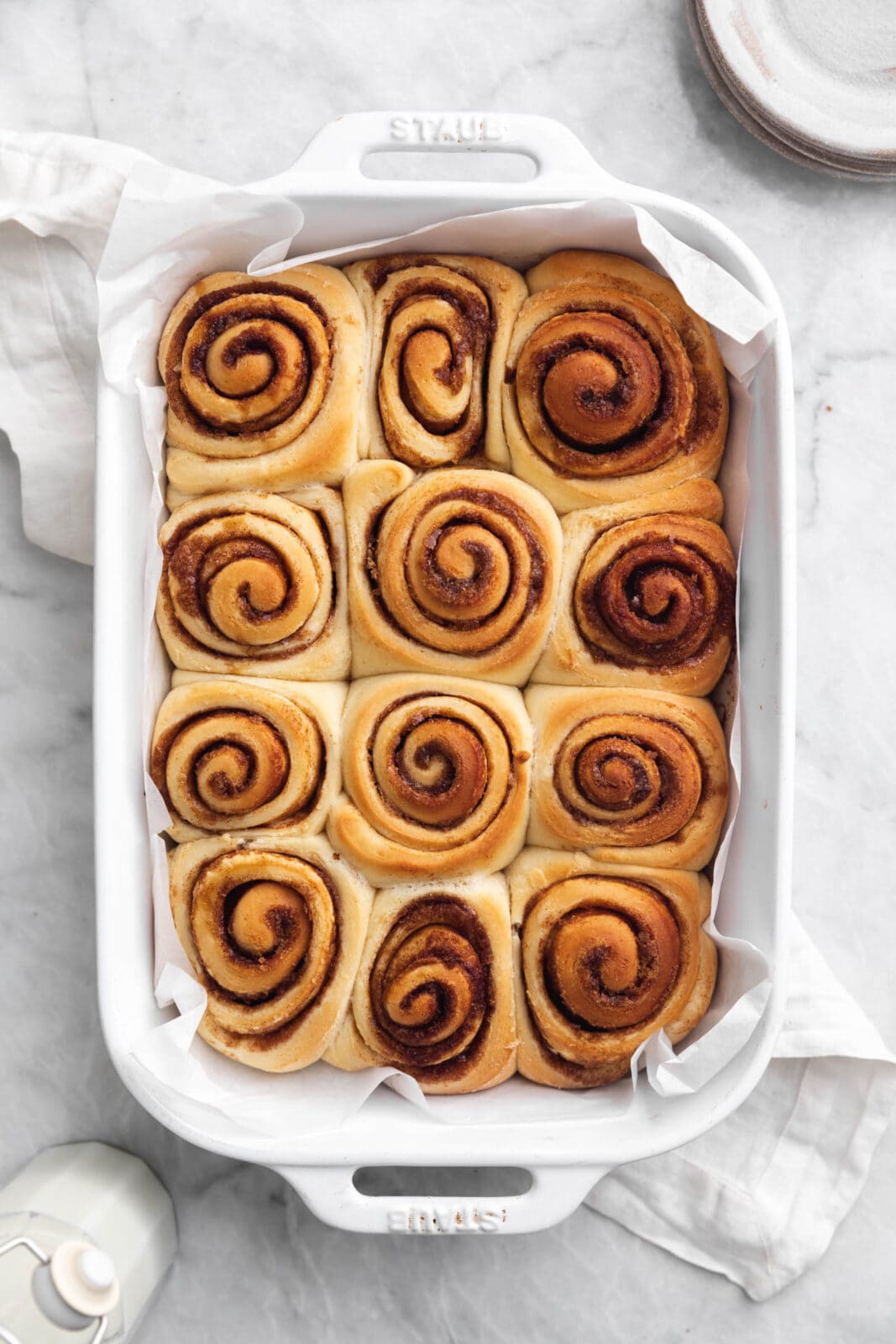 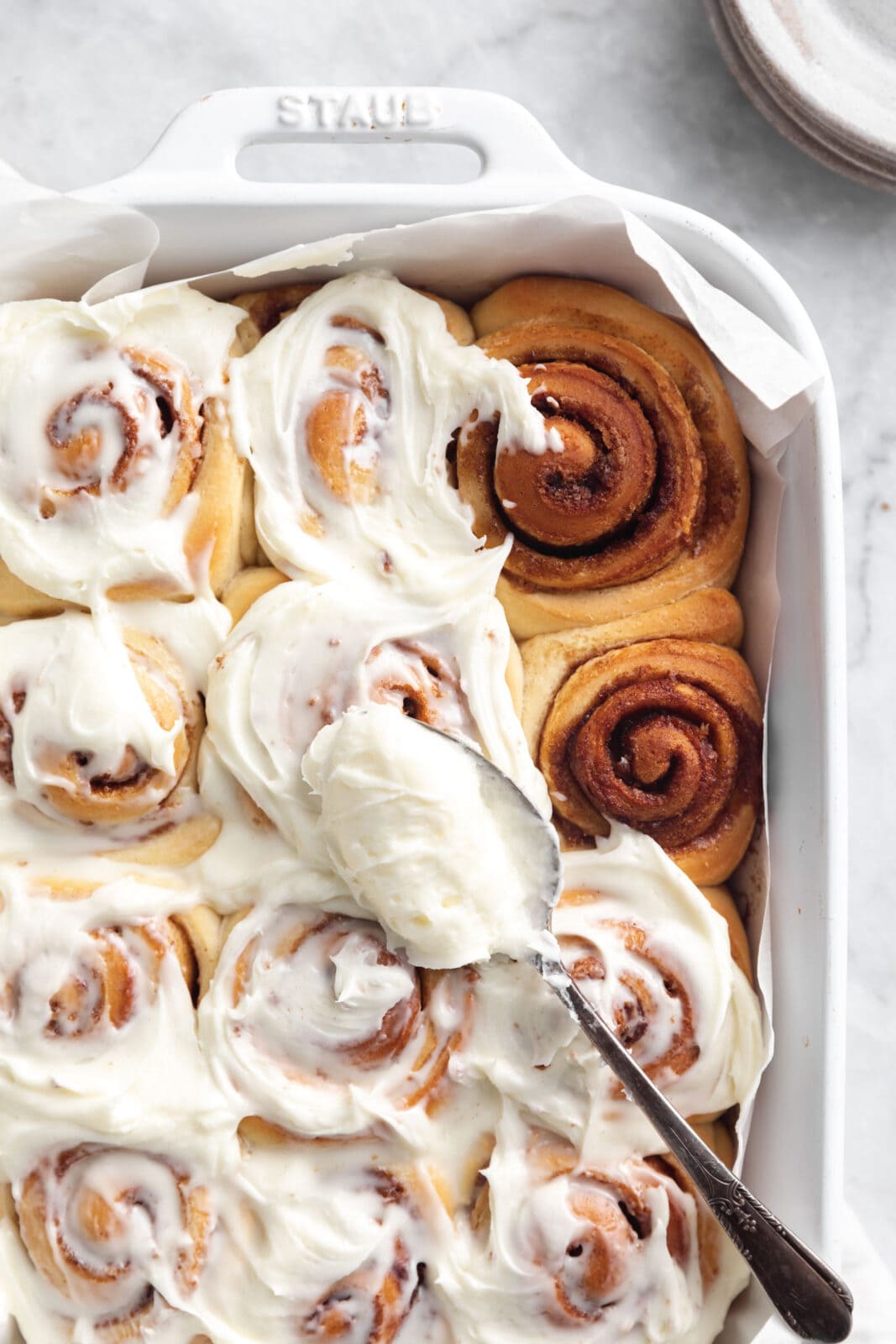 How to know when to stop kneading your cinnamon roll dough

If you watch any baking shows (looking at you, The Great British Bake Off), you’ve maybe heard of “the windowpane test.” This is the easiest and simplest way to test if your dough has developed enough gluten (bonds in the dough that will give it that nice dough-y, cinnamon roll texture).

Rip off a small piece of dough and place it between your fingers, gently spreading your fingers apart to stretch out the dough. If the dough can stretch out and get translucent (I like to hold it up to a window and see that light passes through it), you’ve kneaded it long enough and you can shape it and place it in a bowl to rise. If the dough rips and will not stretch out you’ll need to knead your dough more. Place the piece of dough back with the rest of it and knead the dough for a few more minutes (1 or 2 should do it!) and repeat the test until your dough passes with flying colors! 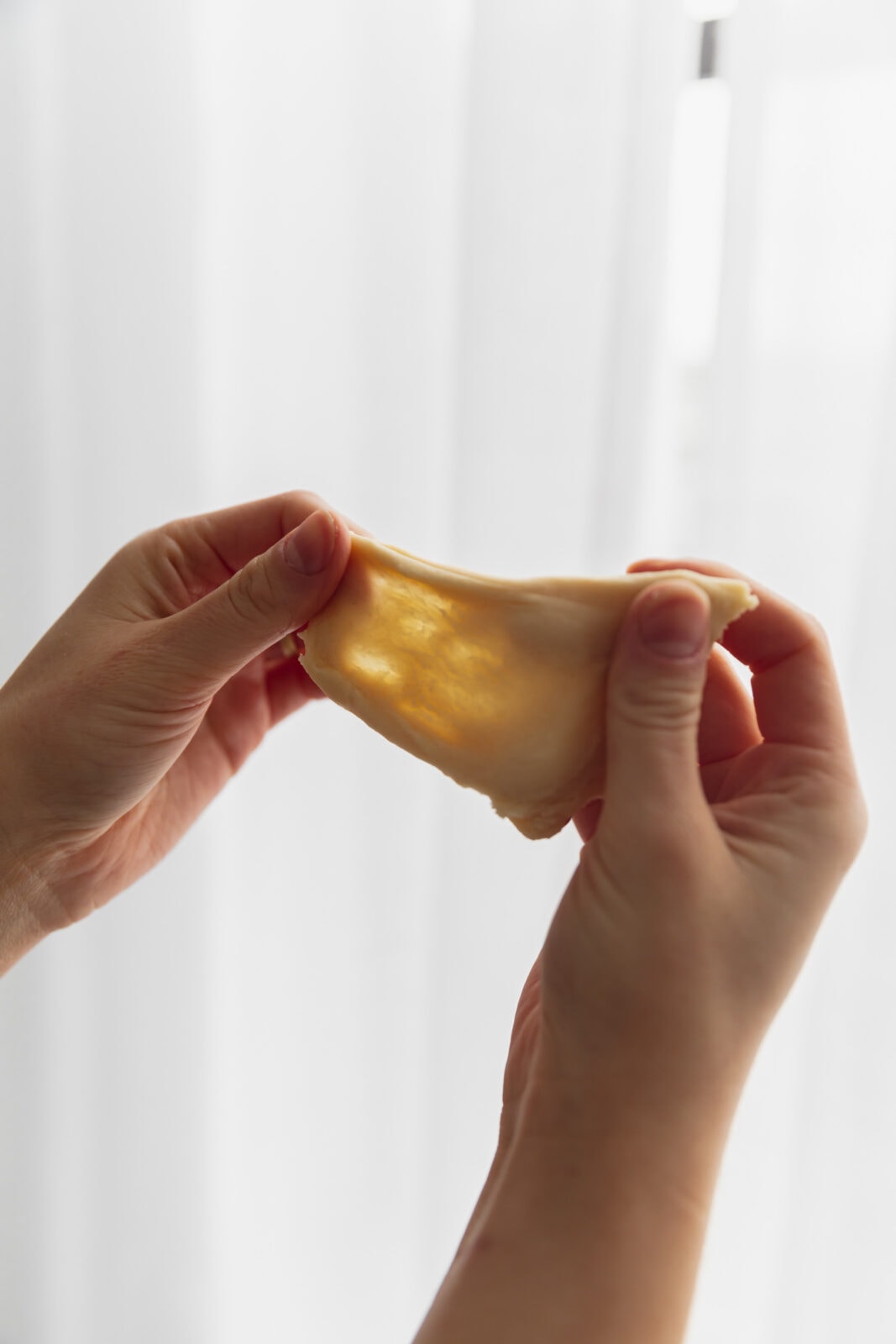 Tips for baking with yeast for beginners

Now I know that cinnamon rolls can feel a little intimidating. Homemade dough, multiple rises, proofing…I get it. But believe me when I tell you that it is so so SO worth it for a gooey homemade cinnamon roll hot from the oven. Plus, once you get the hang of baking with yeast, it’s not so hard! Plus you’ll get the dreamiest, soft, slightly bready dough that tastes worthy of a bakery in no time. Who knew homemade could be so easy? 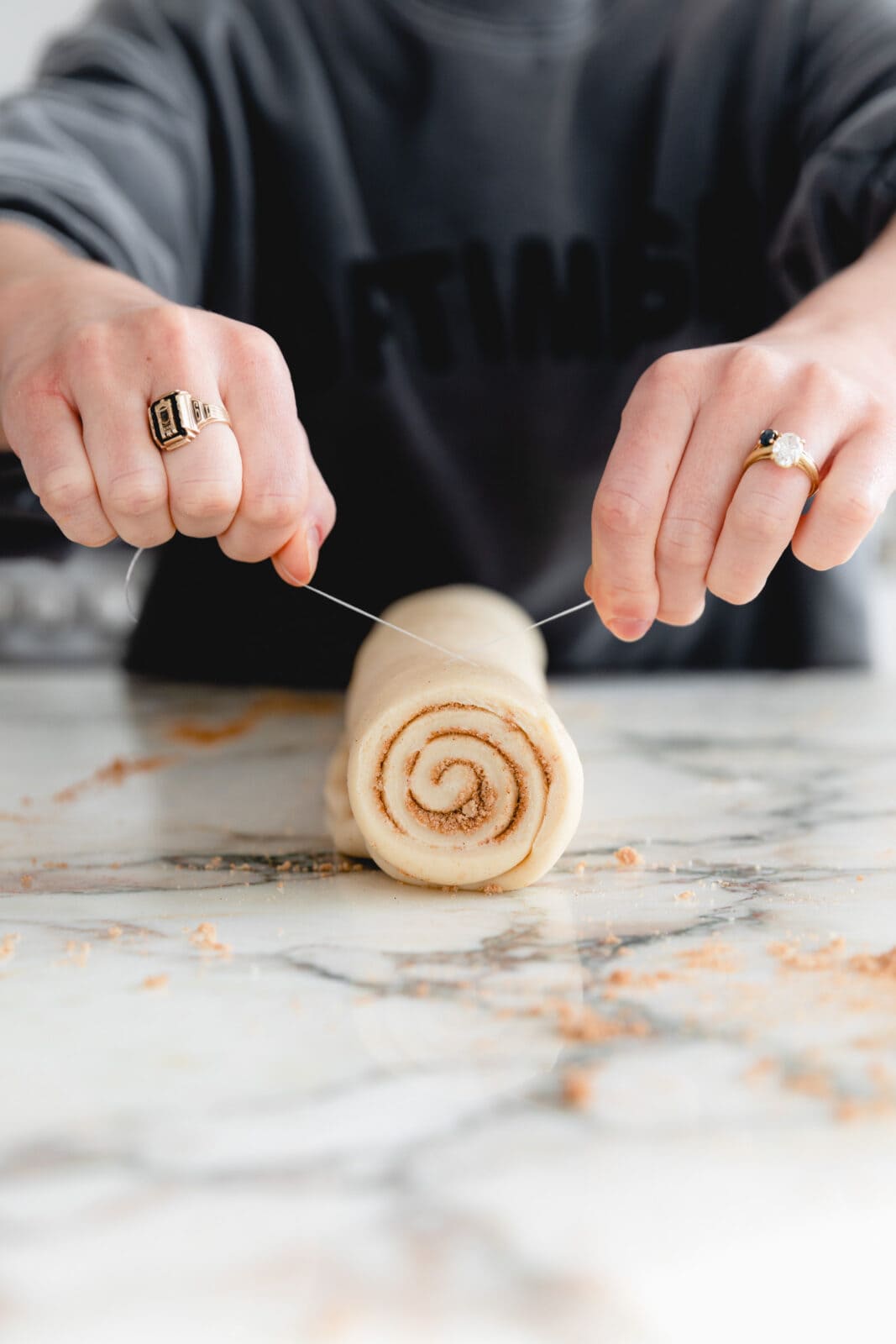 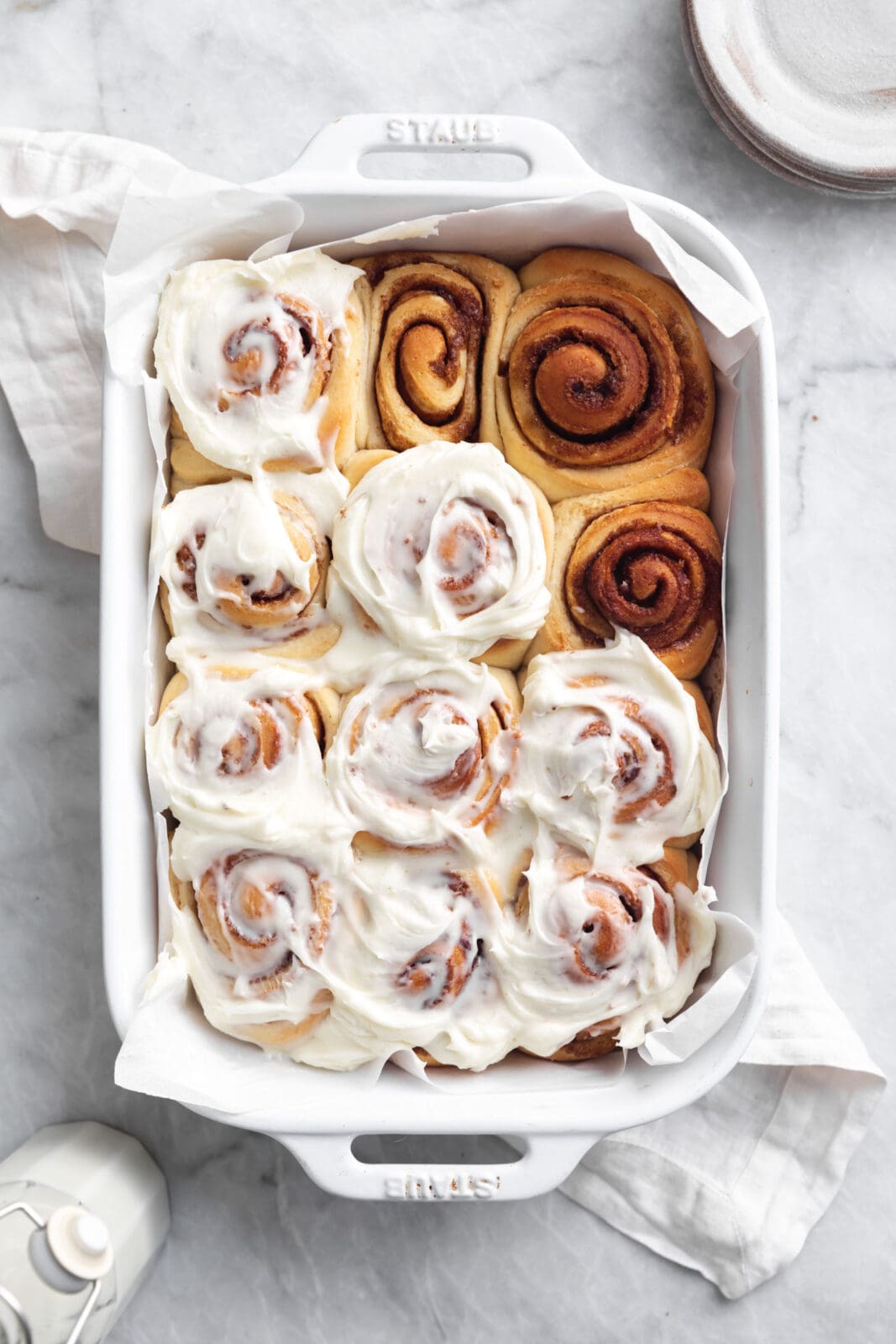 In the unlikely scenario that these cinnamon rolls aren’t inhaled on the spot, you can absolutely store these for later! Here are our top tips for storing these homemade cinnamon rolls so they stay pillowy soft for days! 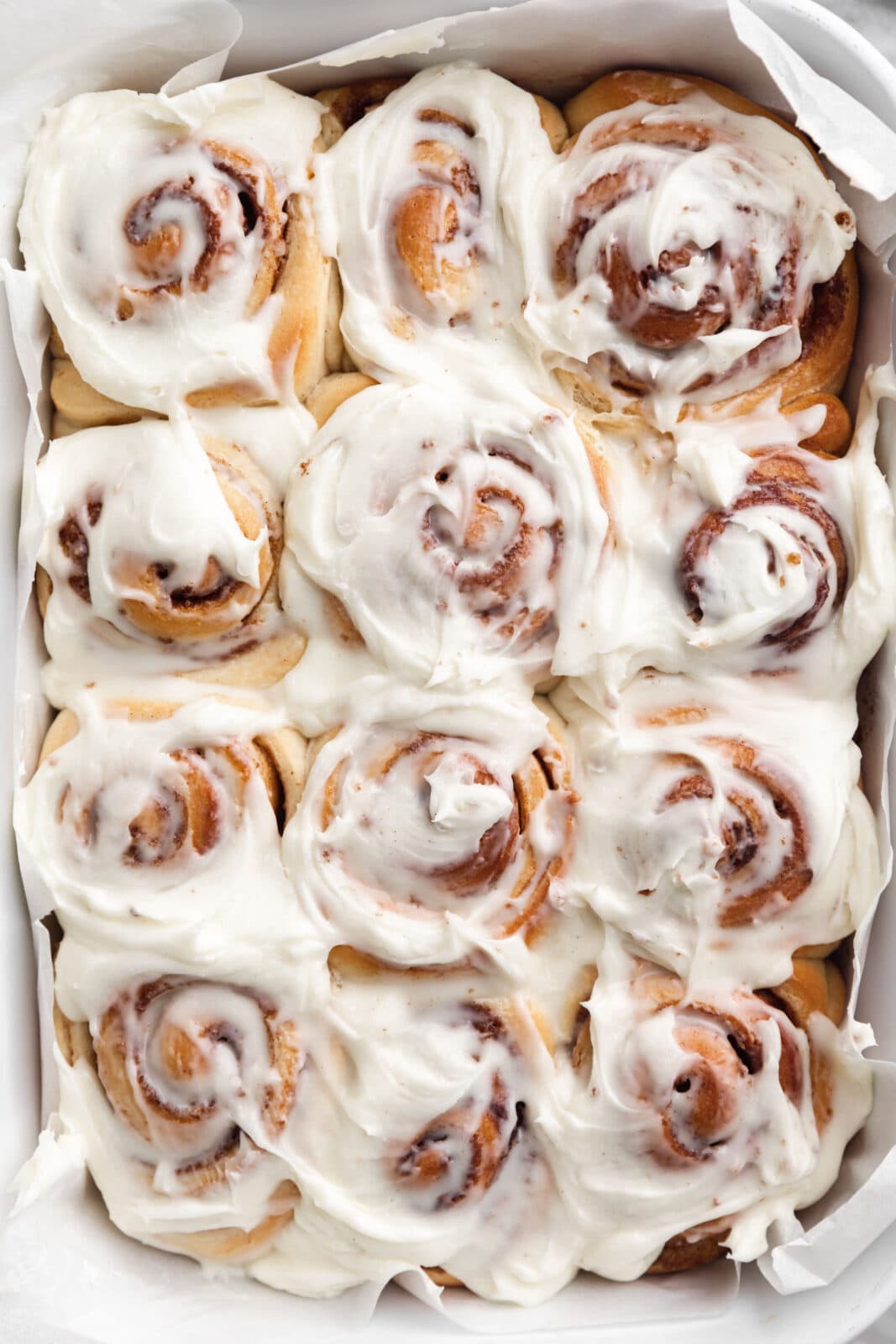