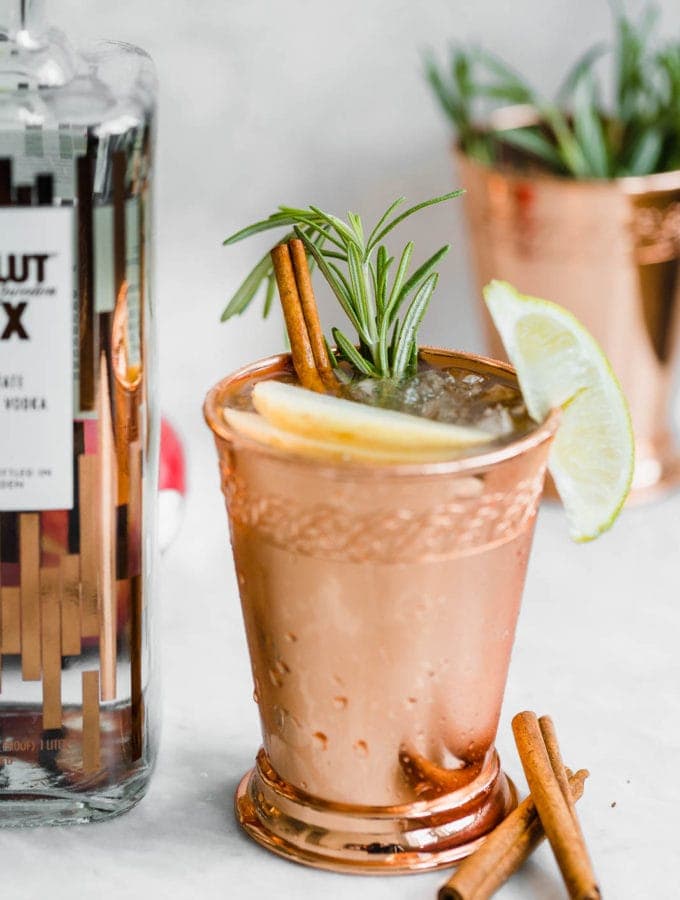 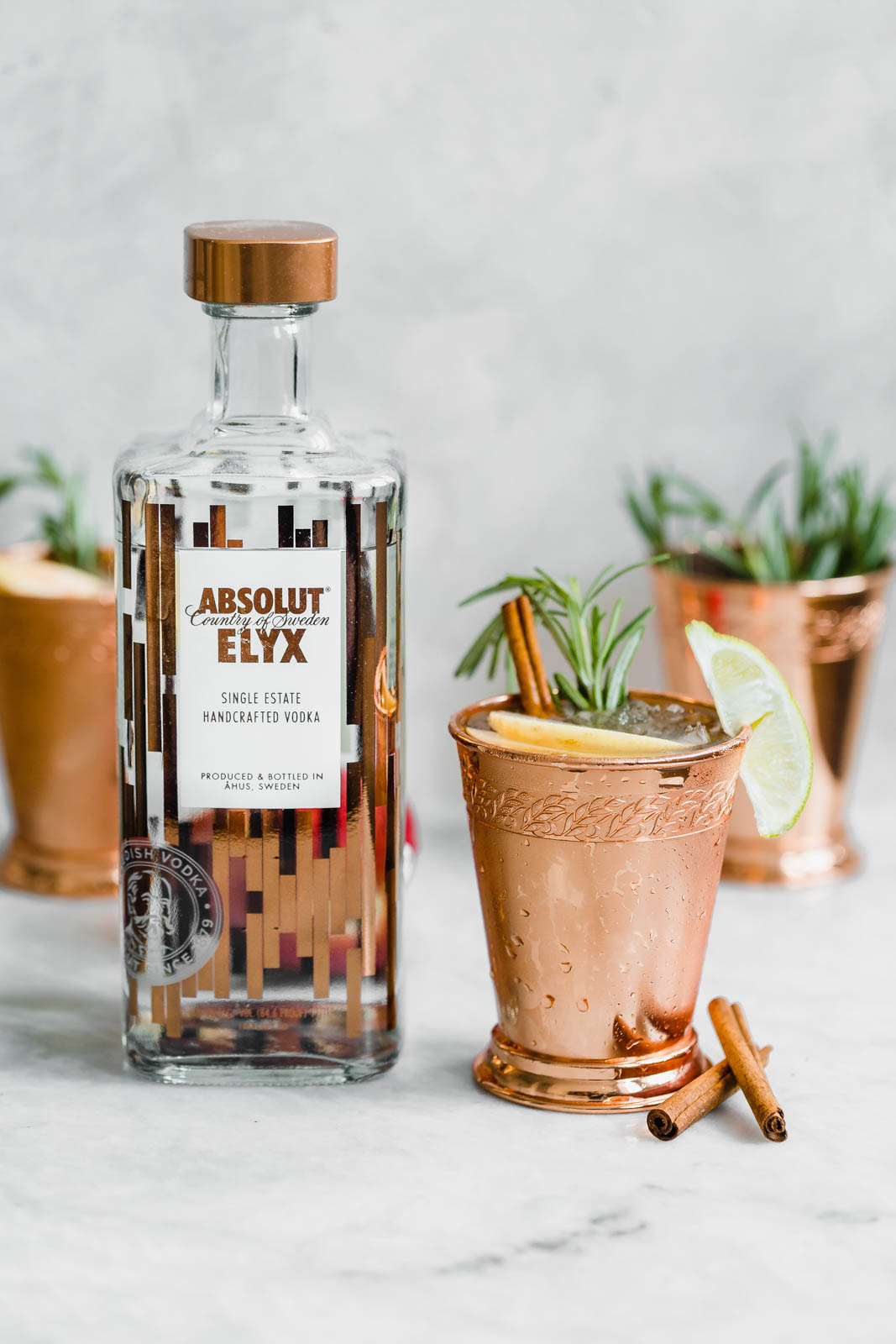 Seriously tho, nothing beats autumn flavors. Things like ginger, cinnamon, rosemary, and apple. Oh, what’s that? This Autumn Apple Cider Moscow Mule has all those flavors? OH OK.

The best Moscow Mule I ever had was on a hot night in Texas. Our best family friends from childhood had moved to Austin, and during college my mom, Rebe, and I went to visit them. On Saturday night, their daughter, Rebe, and I got all dressed up and went downtown for the night. I remember donning a proper cowboy hat for the occasion, and sipping on apple pie moonshine as we got ready (side note: it was insanely delicious).

After making friends at one of the bars, we and our new friends bar hopped until the wee hours of the night. And there, tucked away on a bar off of the notorious Sixth Street, I had the best Moscow Mule of my life. The secret, the bartender told us, was using a darn good ginger beer. One with a big kick. Ever since then, I’ve been hooked on Moscow Mules. 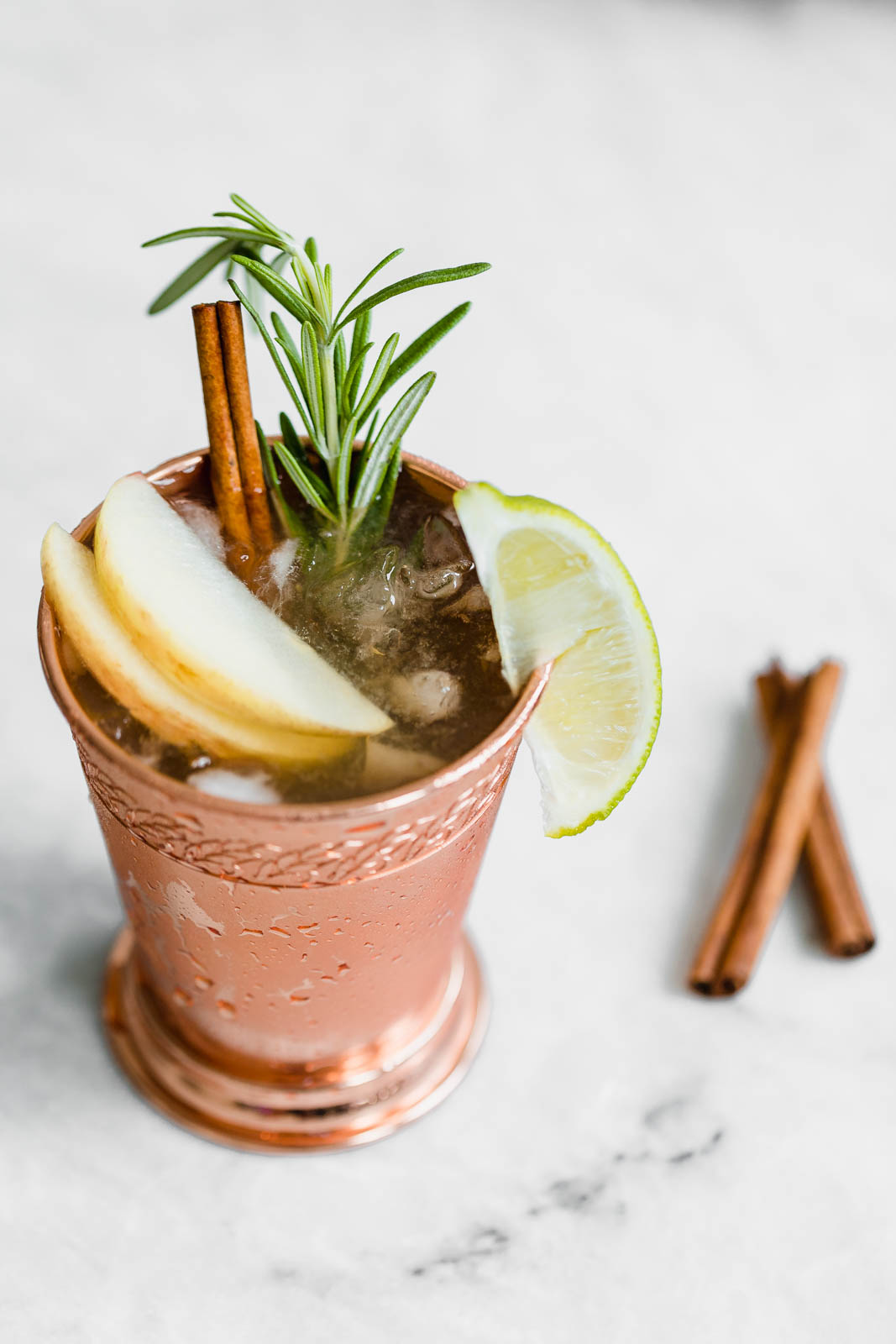 Today I’m doing a take on a classic—a Moscow Mule with a twist. Aka a big splash of apple cider. I also made it with my favorite vodka, Absolut Elyx. It’s incredibly smooth as a result of being distilled in copper barrels. Fitting, since this drink is served in a copper glass 🙂

Even better, it’s garnished with a giant sprig of rosemary, a few apple slices, and a cinnamon stick. And guess what guys? You can use the cinnamon stick AS A STRAW. 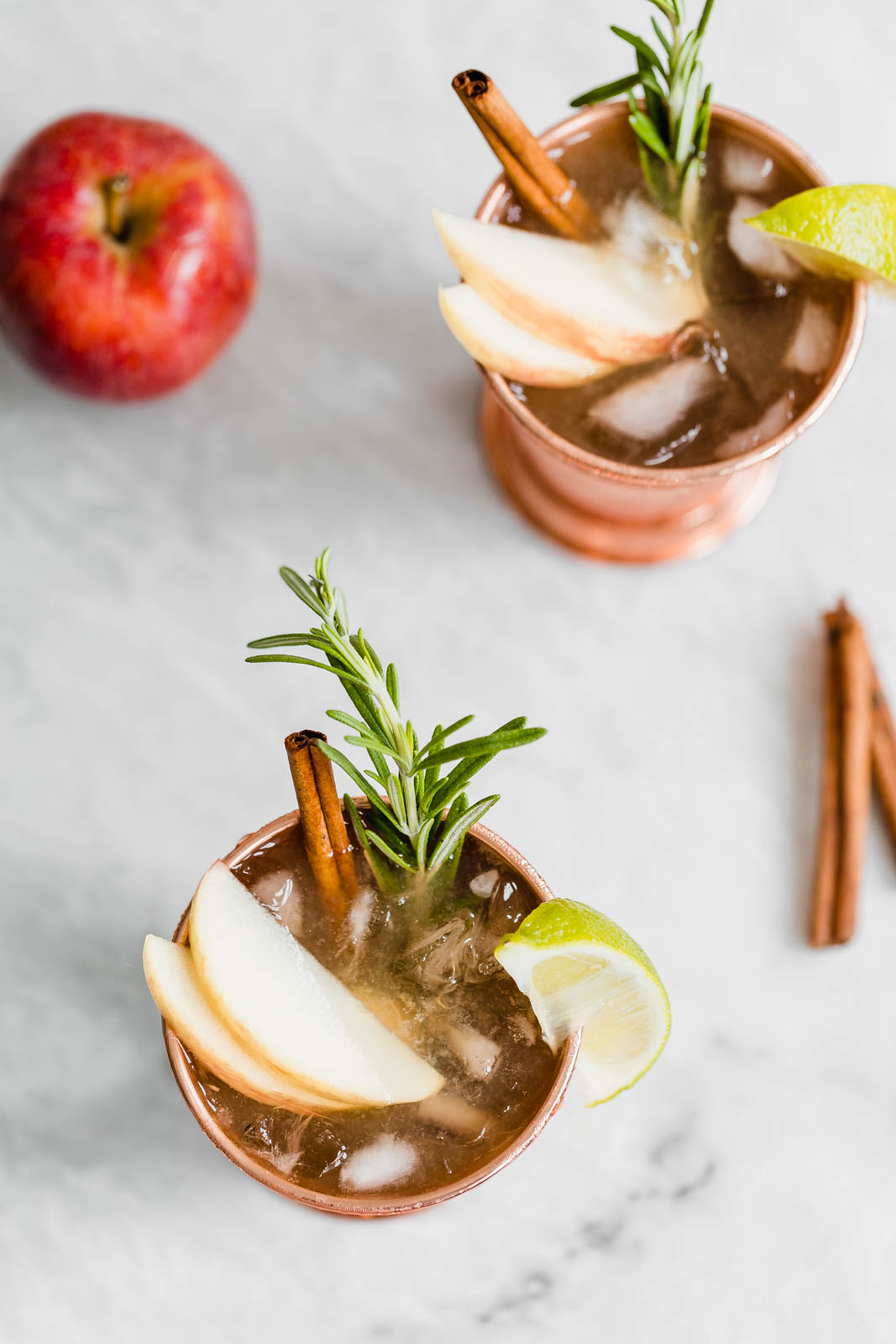 What’s in a Moscow Mule?

A Moscow Mule is a refreshing cocktail that’s typically made with vodka, ginger beer, lime juice, and fresh mint leaves. It’s served in a copper mug with ice and usually comes with a lime wedge. Moscow Mules are particularly popular during warmer months, but I personally enjoy this drink year-round. 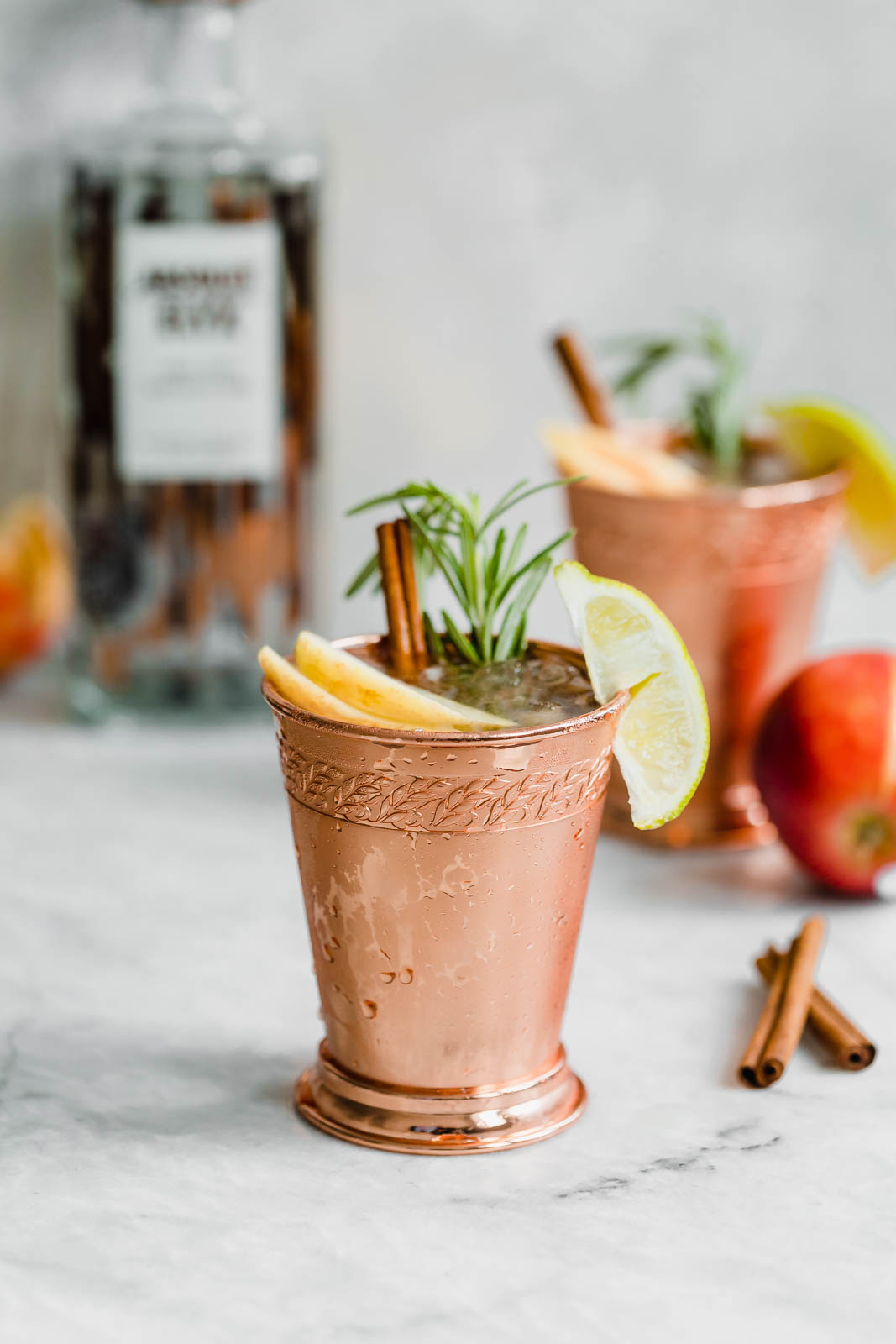 How to make a Moscow Mule

This apple cider Moscow Mule takes less than five minutes to make and can easily be doubled or tripled to serve multiple people. To make this seasonal Moscow Mule, simply combine the vodka, ginger beer, apple cider, and lime juice in a mug and mix everything together with a spoon. You don’t want to make a Moscow Mule in a cocktail shaker, because the ginger beer will lose its carbonation if you shake it too much.

Garnish your apple cider Moscow Mule with a spring of rosemary, a cinnamon stick, and a lime wedge for the full effect! 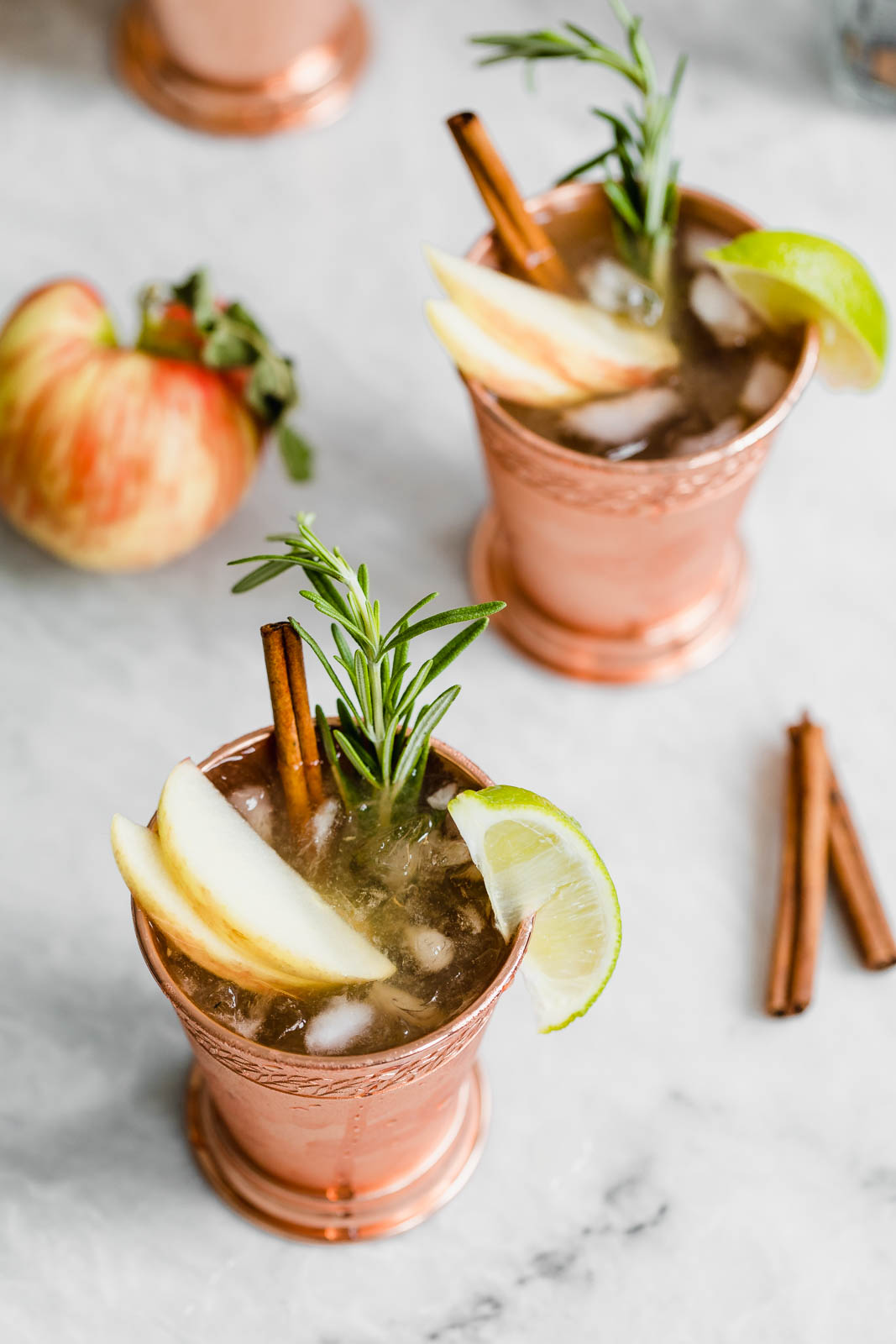 So seeing as it’s Thursday which basically means Friday, go to the grocery store and pick yourself up all the ingredients you need to make this Autumn Apple Cider Moscow Mule. You will not regret it. 🙂

This is a sponsored conversation written by me on behalf of Absolut Elyx. The opinions and text are all mine.