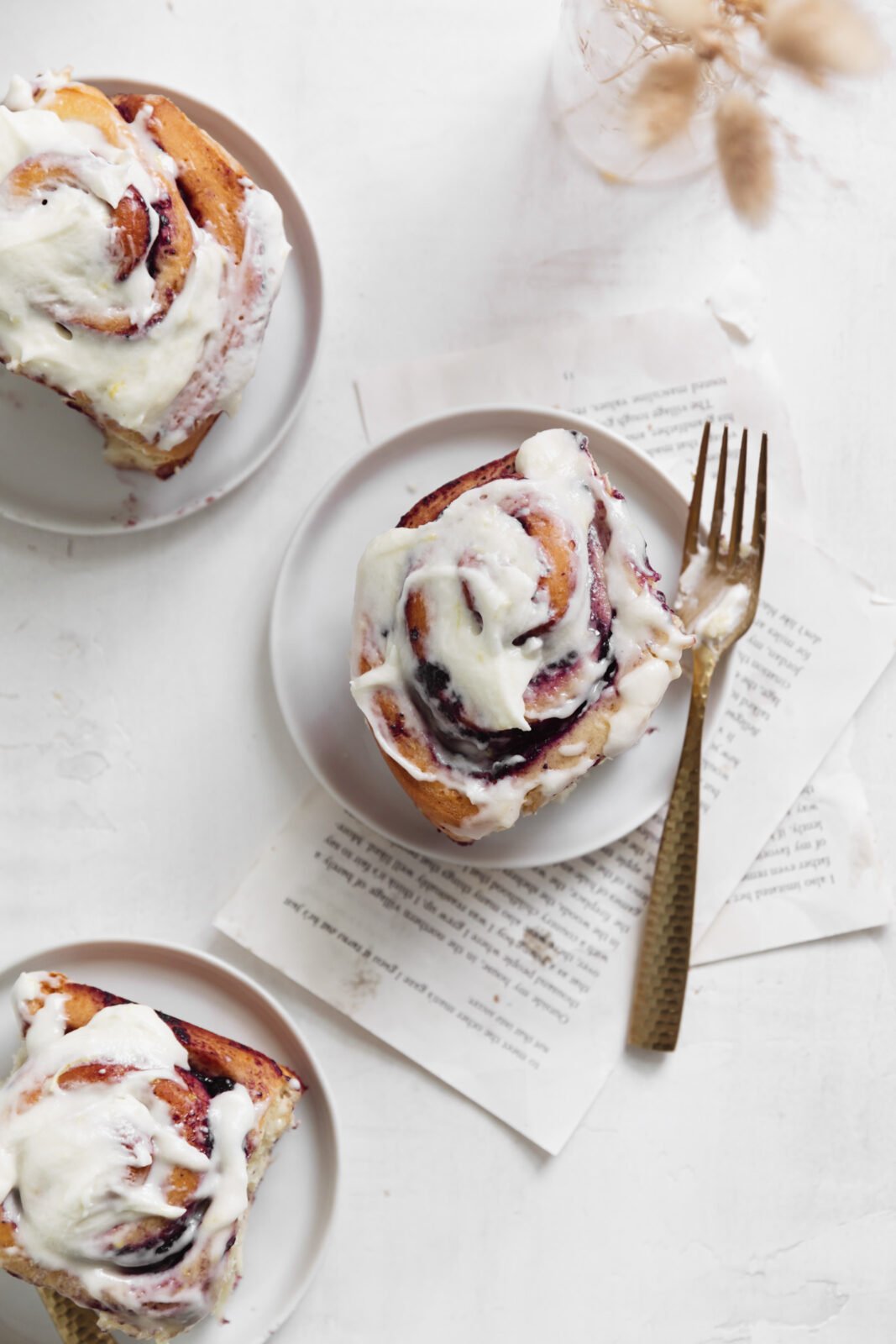 I’m sort of a cinnamon roll fanatic. But sometimes a classic cinnamon rolls loaded up with butter and cinnamon sugar feels a little heavy come the spring season. That’s where these scrumptious blueberry cinnamon rolls come in. They’re made with a zingy lemon blueberry filling and topped with a dreamy lemon cream cheese icing that screams spring.

They’re perfect for whipping up on a Sunday as a fun weekend baking project, dropping off for a neighbor, or serving for Mother’s Day brunch. Or just because…because you certainly don’t need an occasion to make blueberry cinnamon rolls in my opinion. 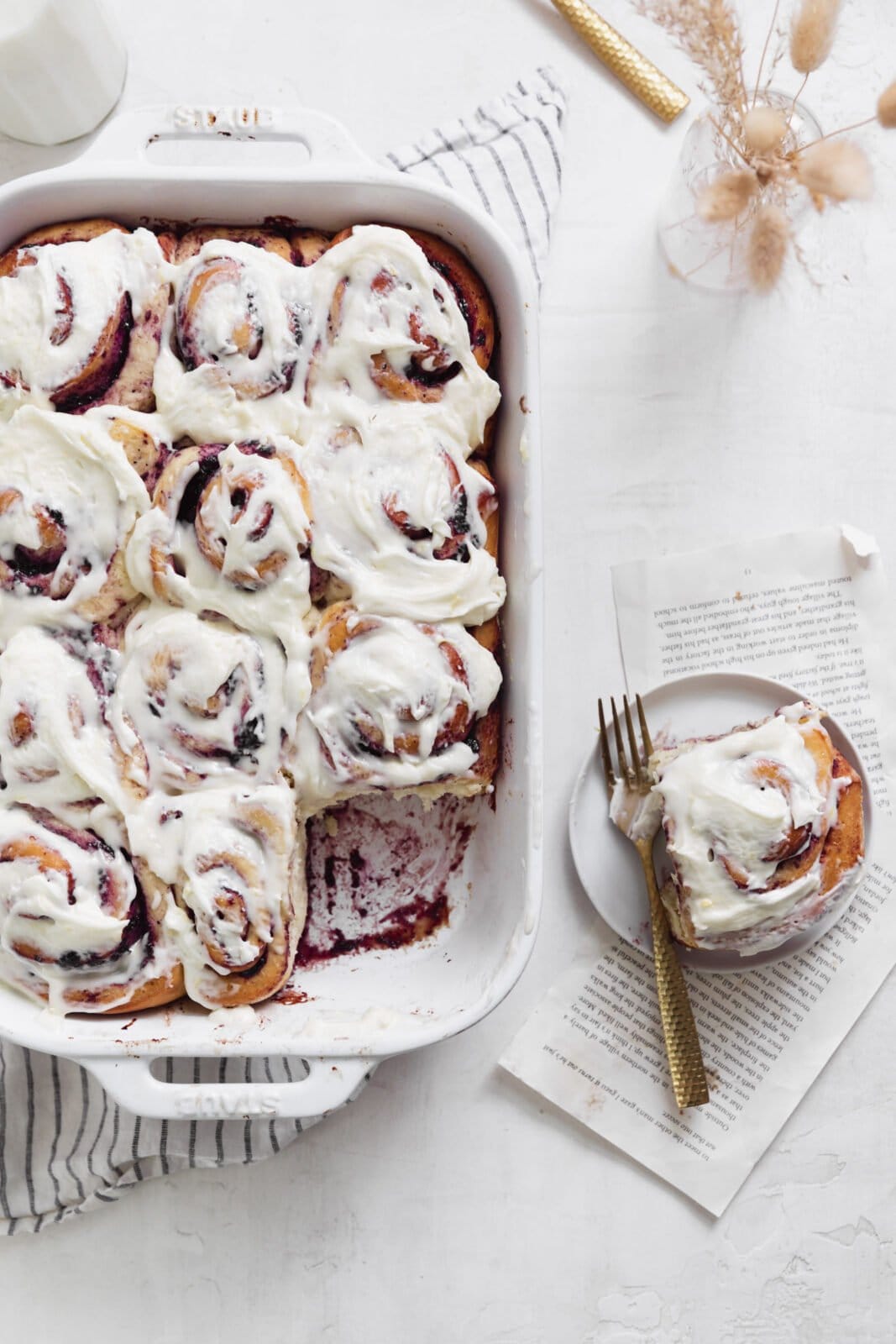 What do you need to make blueberry cinnamon rolls?

I suppose that these should actually be called blueberry sweet rolls because they don’t have any cinnamon in them! Maybe it’s just me, but I’ve always thought that “sweet rolls” didn’t really encapsulate the ooey-gooey, sweetness of the cinnamon roll form. So that’s my logic. I present to you blueberry cinnamon rolls sans cinnamon.

The best part about these blueberry cinnamon rolls is that they are SO easy to make. Dare I say, easier than regular homemade cinnamon rolls? I DO. Because these babies are filled with blueberry jam, meaning you don’t have to deal with any of that softened butter and cinnamon sugar messiness of traditional cinnamon rolls. 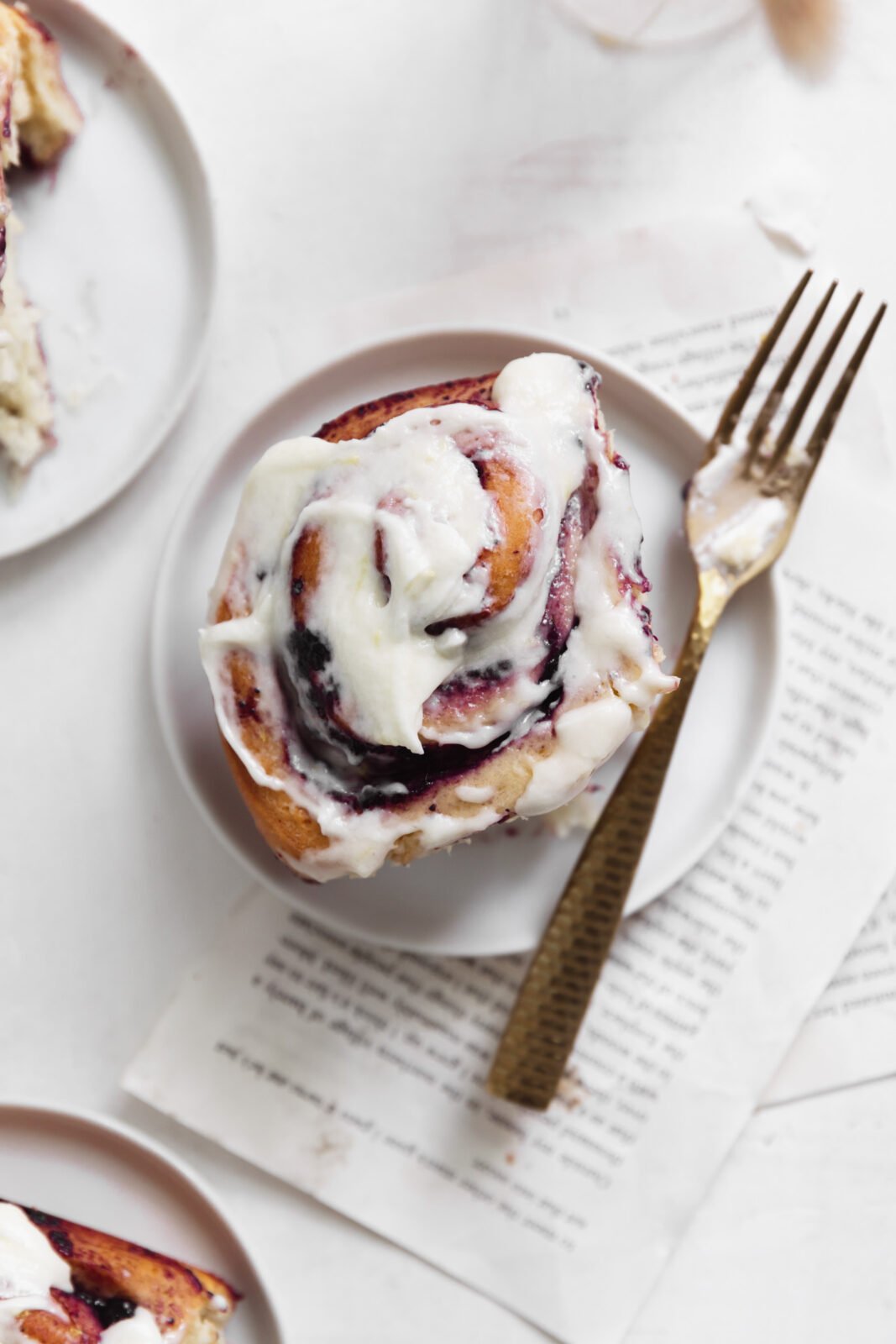 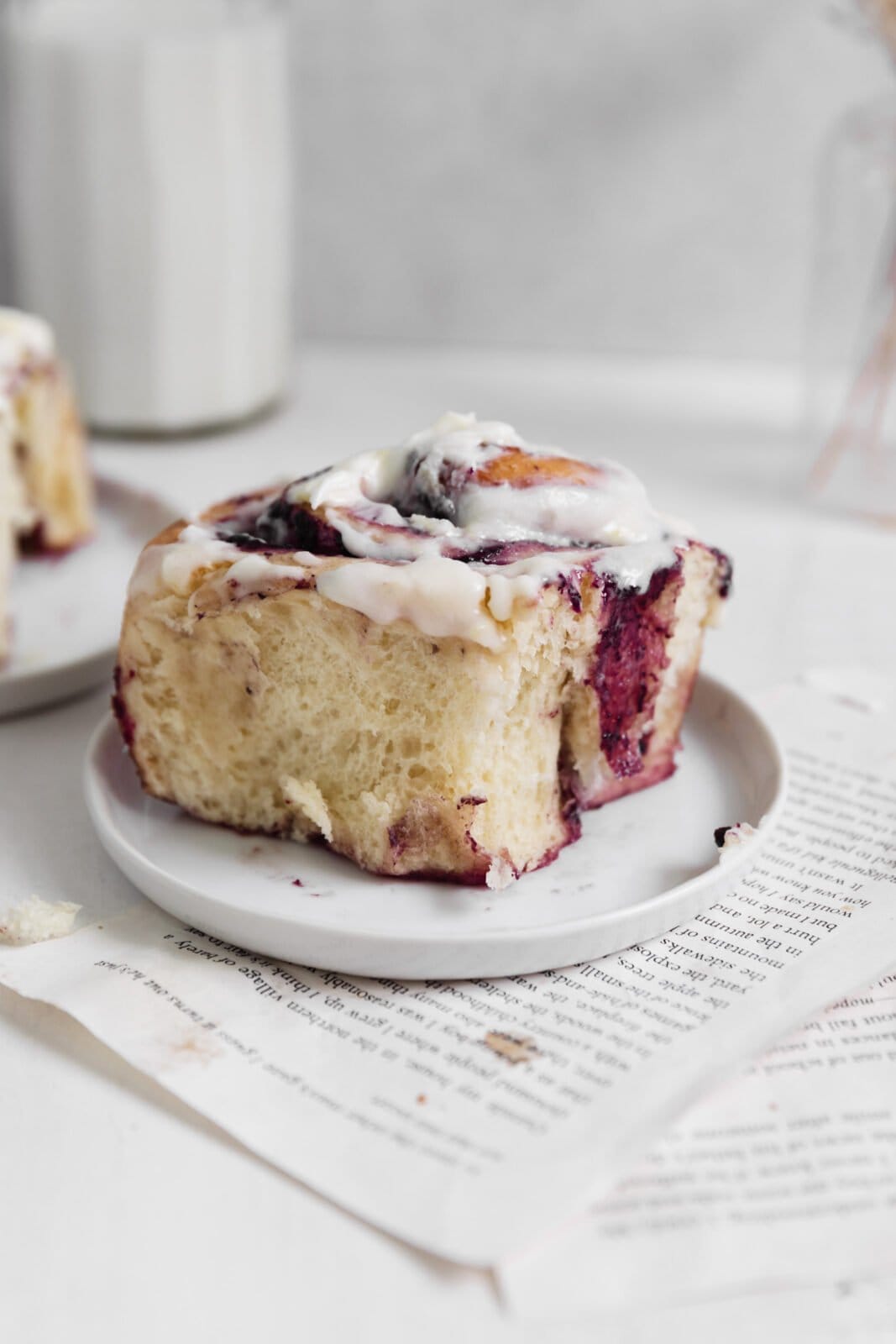 How to zest a lemon:

Now, I know that you might have seen that on the ingredient list and panicked. I know that’s what I used to do when recipes called for zest. Before we get into it, let’s make sure we’re all on the same page. You make lemon zest by finely grating the peel of your lemon. The zest of citrus fruits packs a potent, flavorful punch. In this case, the lemon perfectly complements the blueberry flavor and really brightens up the whole recipe.

So, how do you zest a lemon? No, it is NOT a stupid question! It’s actual super, super simple. Just wash your fruit and whip out your zester. If you don’t have a zester I would highly recommend investing in one, but you can also use a microplane. In desperate times I have even used a fine cheese grater and it does the trick. Hold the zester at an angle and pull your lemon across until you reach the white of the rind. Rotate your lemon, repeating until you’ve gone all the way around your fruit. All of the zest will gather on the back side, where you can just scrape it into your frosting and your blueberry filling. 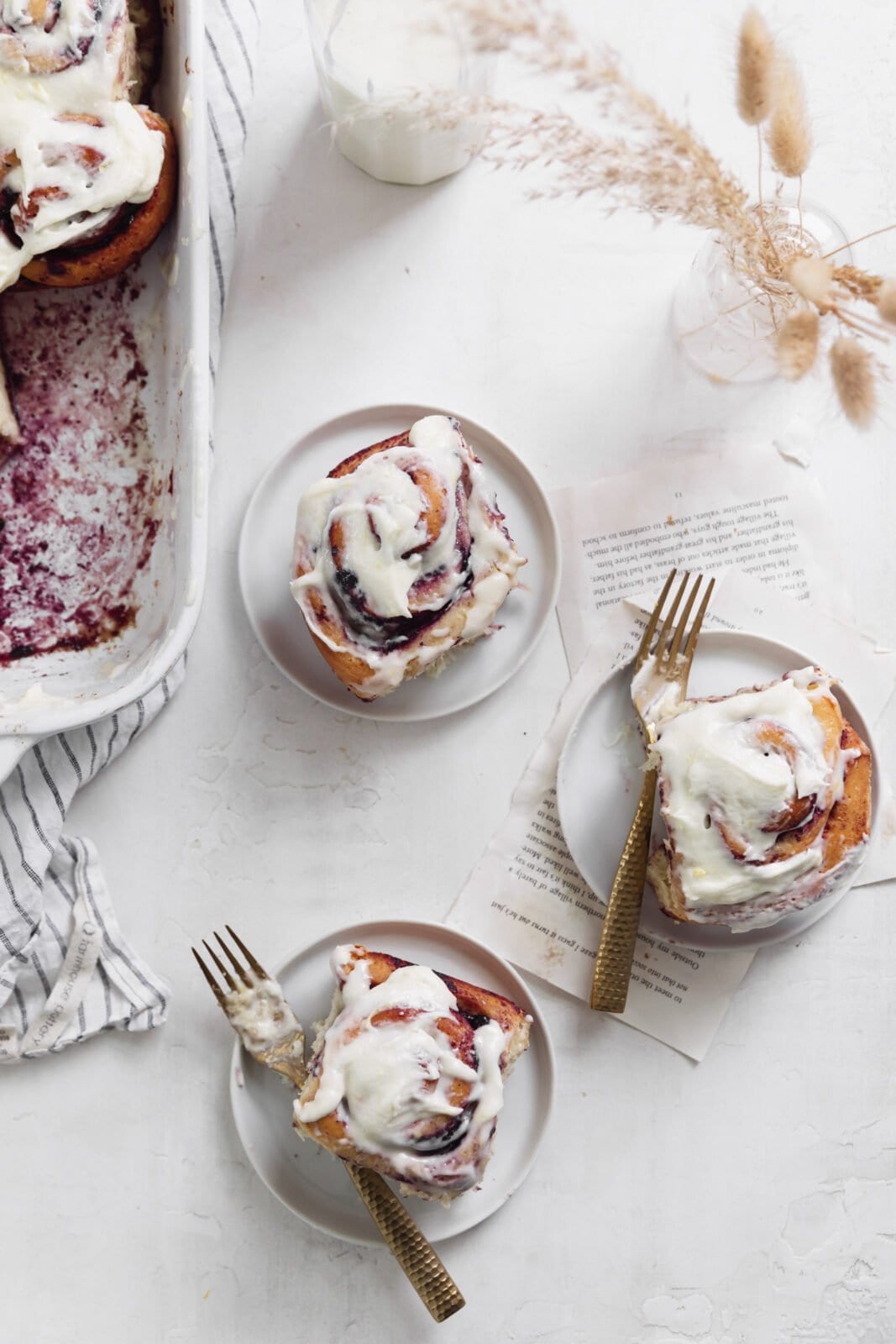 Thanks to that jar of blueberry jam, these blueberry cinnamon rolls are pretty easy to throw together. If you’re new to yeasted dough, follow the recipe closely, trust the process, and follow these 3 rules: 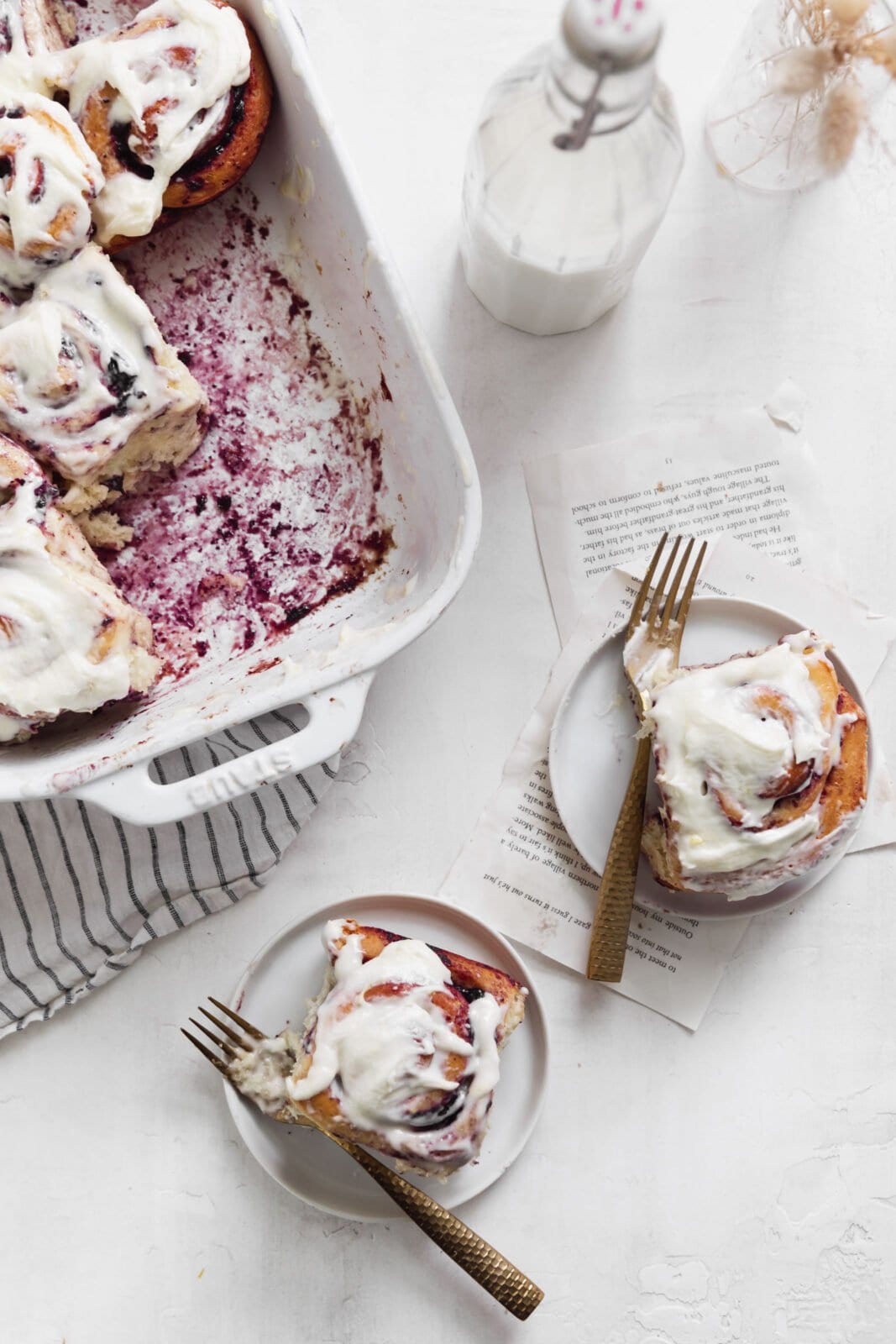 Happy blueberry season, my friends! We hope you enjoy these blueberry cinnamon rolls just as much as we do!

For the Blueberry Filling

For the Lemon Cream Cheese Icing