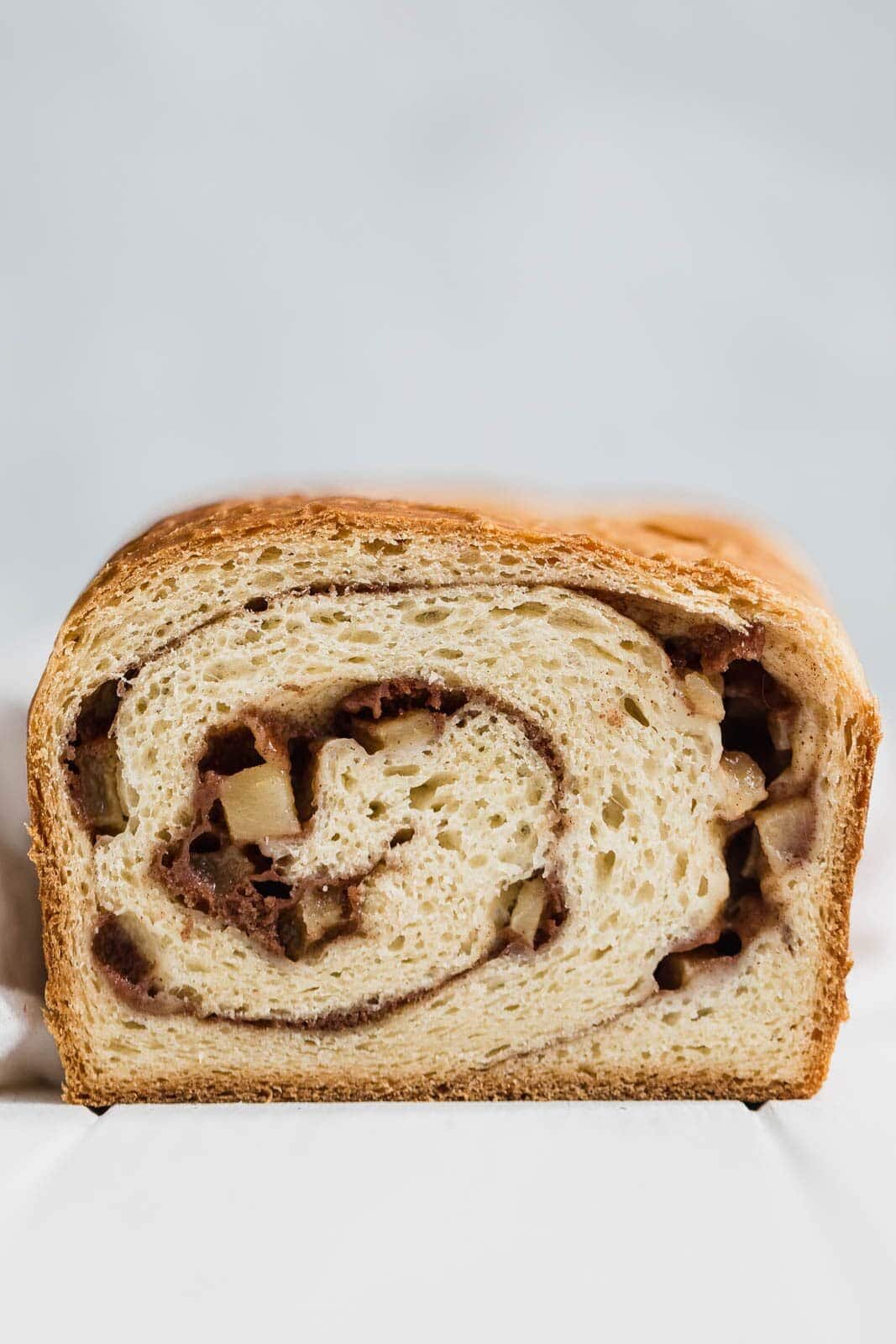 So… this apple cinnamon bread is easily the best bread I’ve ever made. It tastes just like those cinnamon swirl 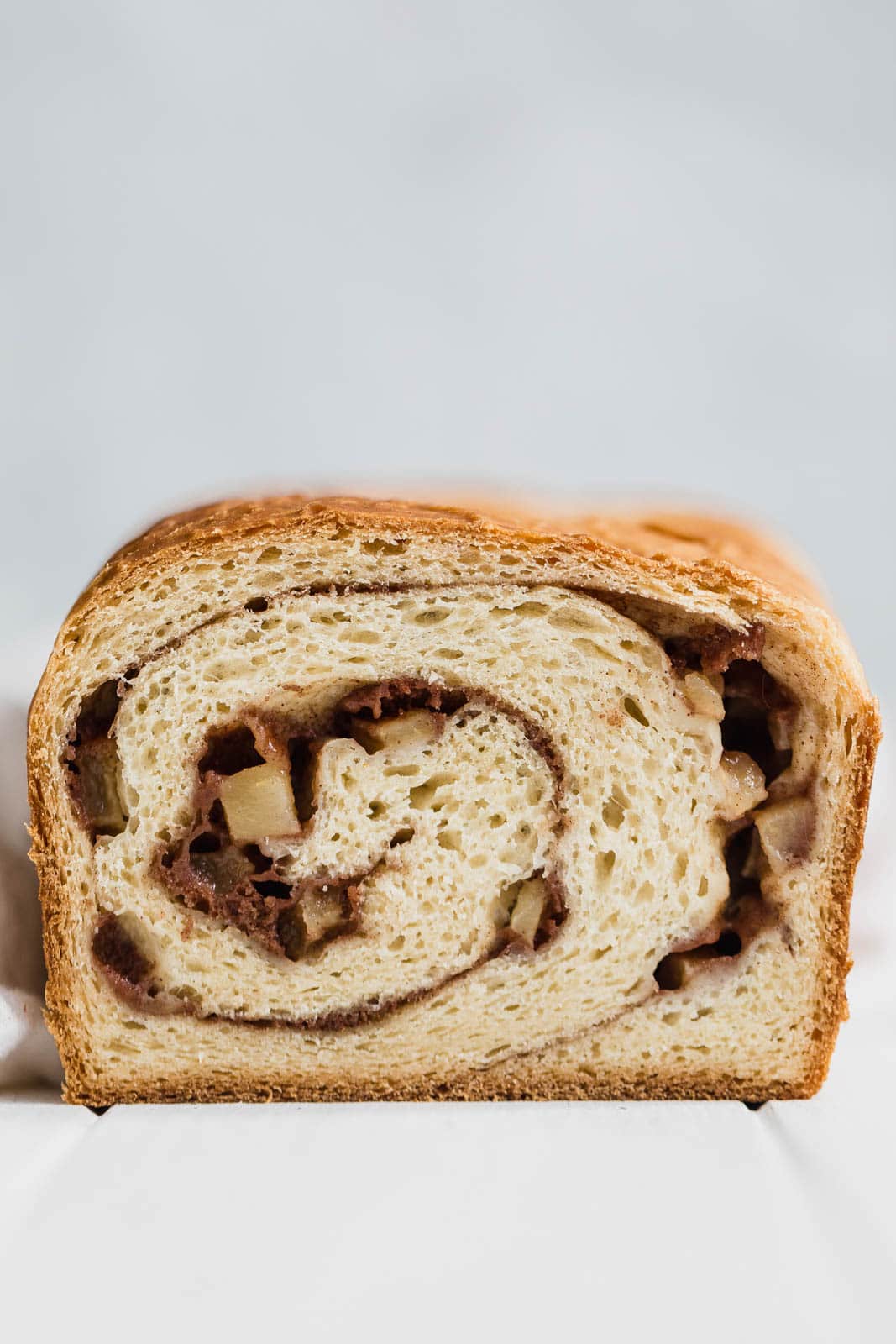 So… this apple cinnamon bread is easily the best bread I’ve ever made. It tastes just like those cinnamon swirl breads my mom would get my sister and me from the store growing up. Only I’d say it actually tastes better!

After 25/30 days away, I’m finally back home in Detroit. And man, it feels good. I’m totally exhausted and have 5,001 things to get done in the next week, so my head is buzzing and I can barely keep it on straight.

BUT. It will get done, things will be great, and great recipes are on the way to you 🙂 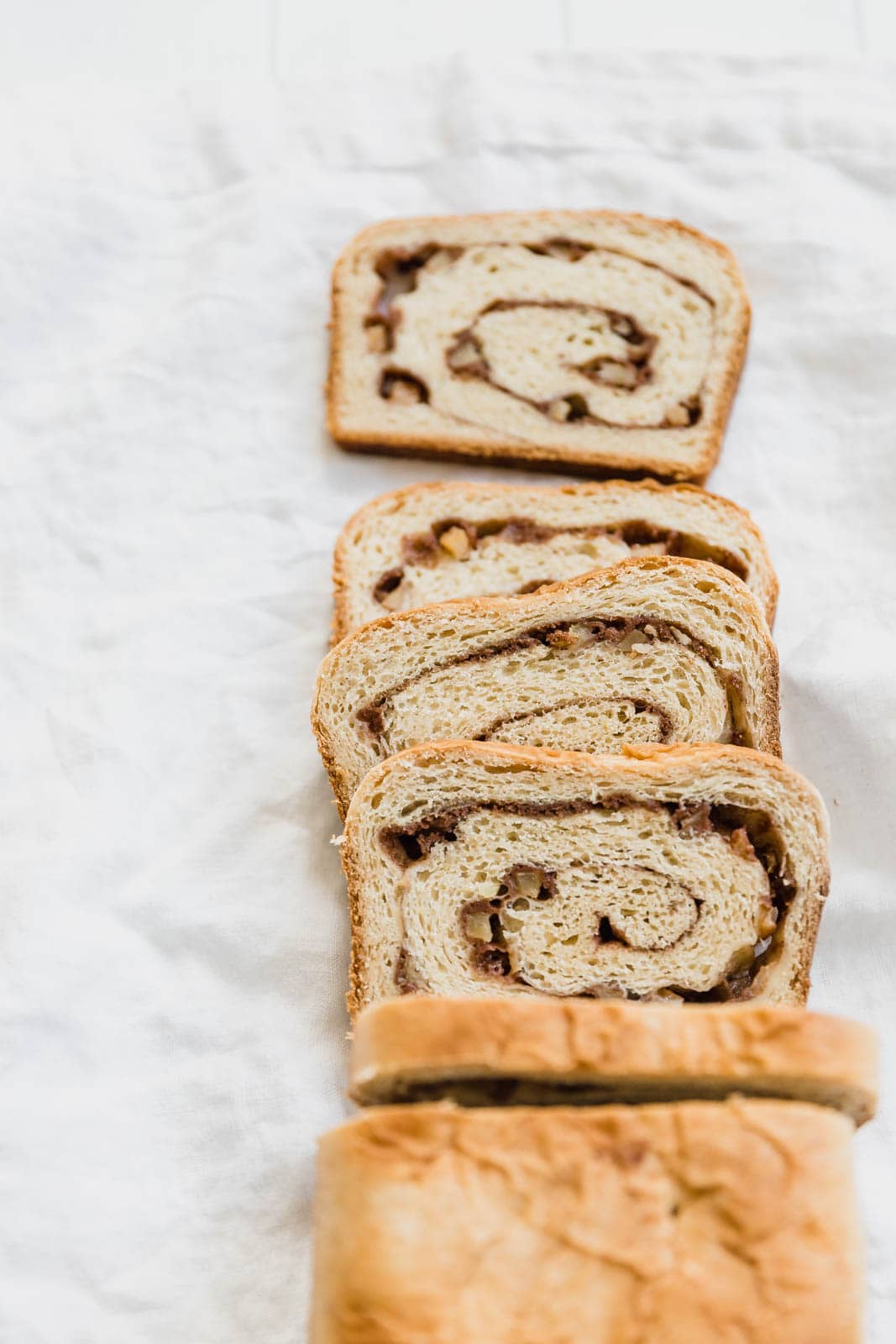 For now, I’ll leave you with this ridiculously awesome Swirled Apple Cinnamon Bread.

Like imagine this baby, toasted, with a pat of butter. You’re welcome. 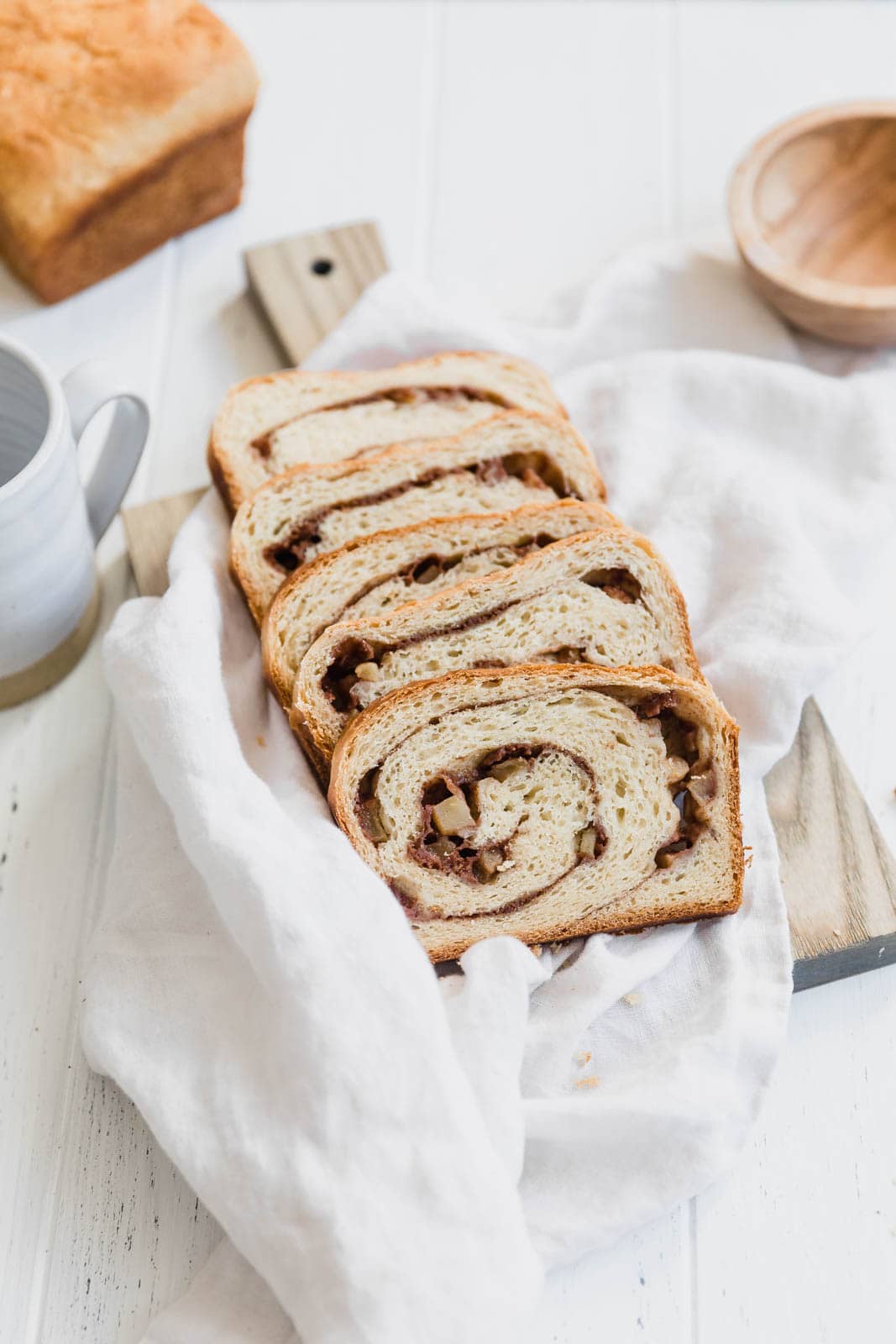 If you’re unused to making homemade bread, I bet I can guess the two things that make you nervous about attempting this recipe at home.

Did I guess correctly? If so, let me be totally clear: HOMEMADE BREAD IS EASY TO MAKE. (Did everyone in the back hear that?). And that swirled apple cinnamon filling? It takes less than 5 minutes to make the bread look like that. 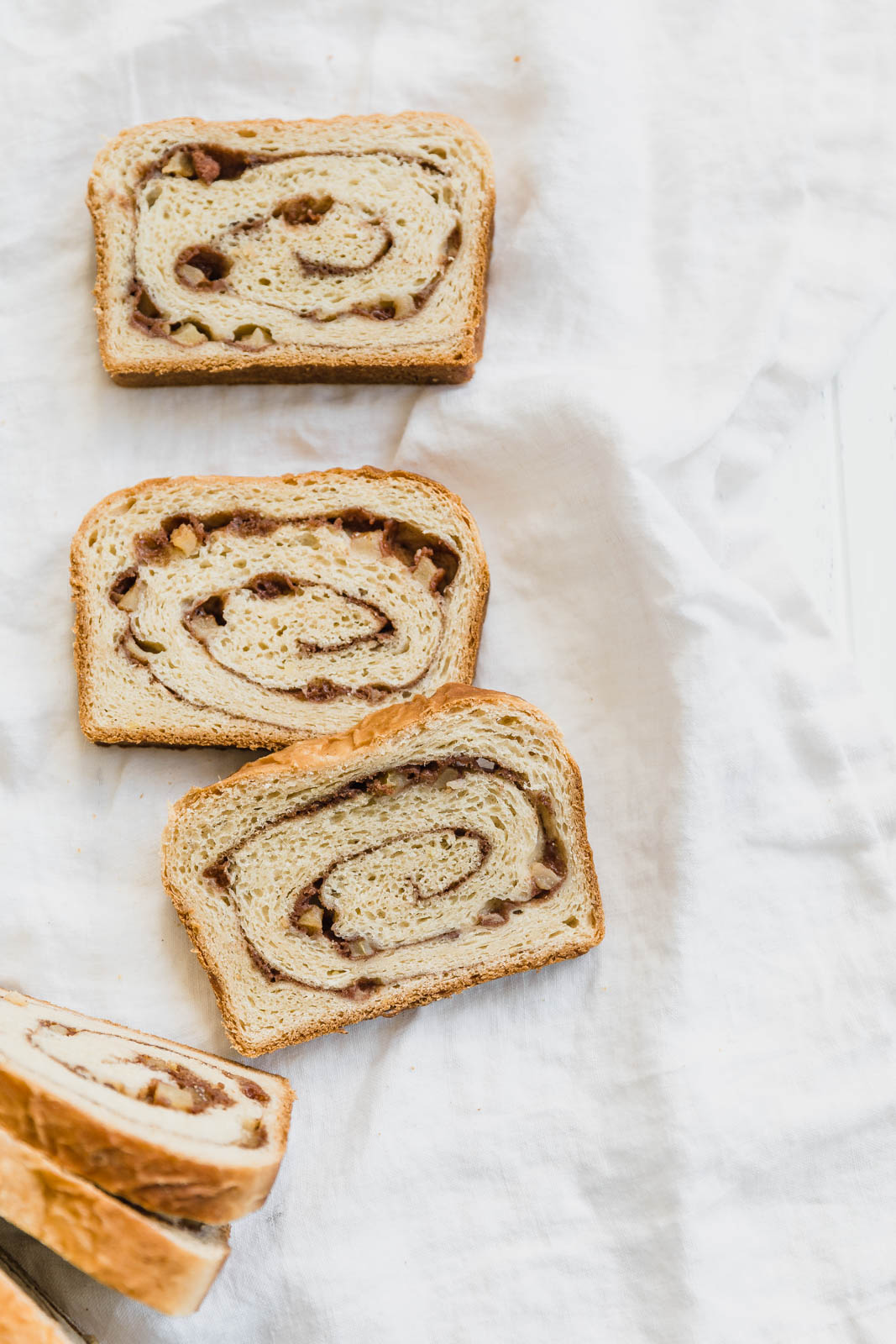 To make this apple cinnamon bread, you first need to make the dough. It’s an enriched dough, meaning there’s butter and sugar in it. To make the cinnamon swirl bread dough, simply combine instant active yeast, brown sugar, salt, and water in the bowl of a standing mixer. Stir that all up, and then throw in the flour, butter, and half of a mashed potato. (The mashed potato is just a cooked, peeled potato that’s been mashed with a fork. Don’t add anything more to the potato!).

I used the dough hook attachment of my stand mixer to knead the bread dough, but you can also do this on a countertop with your hands. No matter which method you use, you’re looking to knead the dough until it begins to pull away from the sides of the bowl. The dough should feel slightly tacky still, but shouldn’t stick to your hands. You should also be able to stretch it fairly easily without it breaking or ripping. 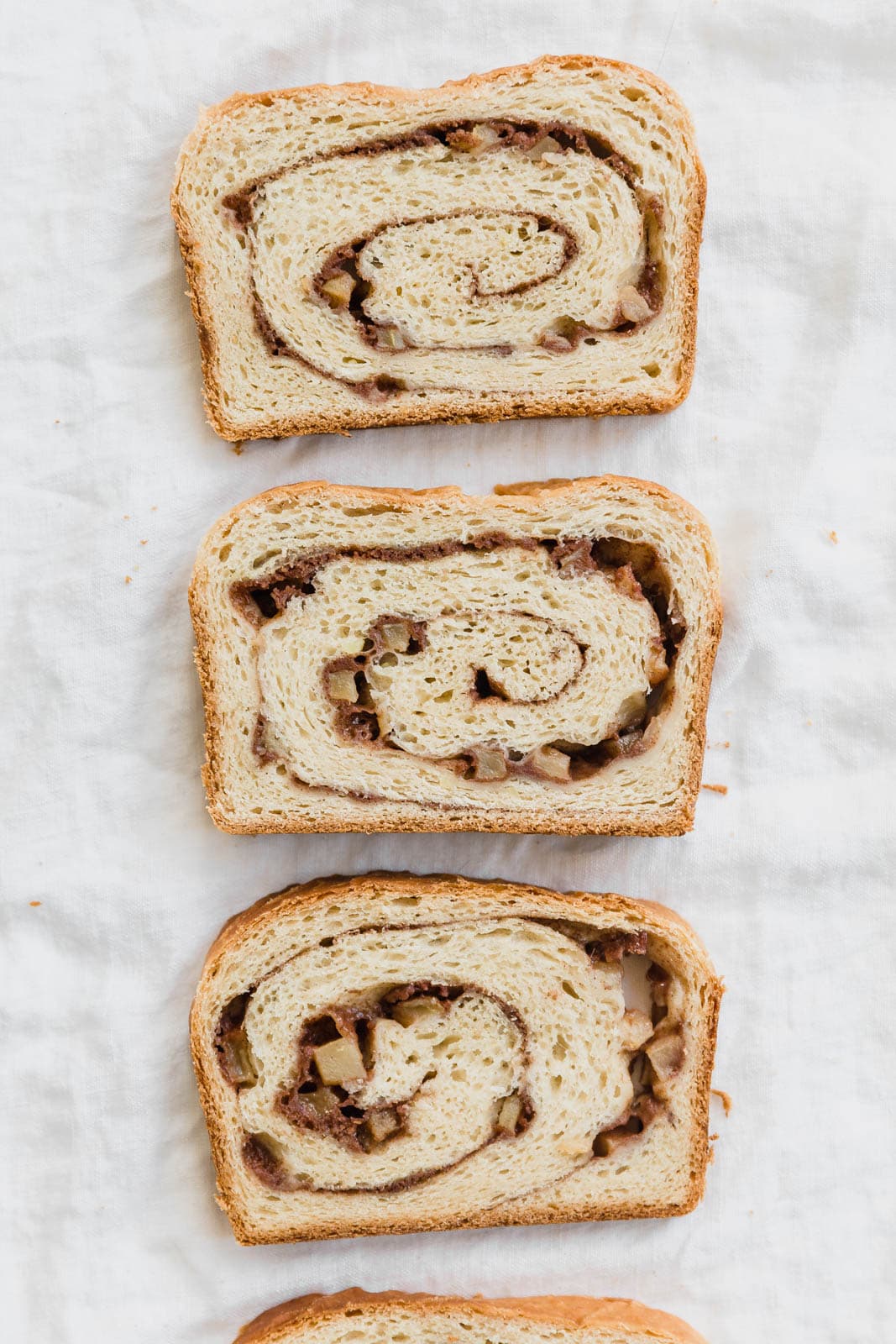 After you’ve kneaded the bread, grease another bowl and pop the dough into it. Cover the bowl with a towel and set it in a warm, draft-free place and leave the dough to rise until doubled in size (this can take anywhere from 45 minutes to an hour and a half, depending on the time of year).

While the dough is rising, prep your filling ingredients. Combine some flour, brown sugar, and cinnamon in a bowl, and then peel and finely chop an apple. Once the dough has finished rising, punch it down gently and then roll it out into a long rectangle. Sprinkle the cinnamon sugar mixture over the dough, and then dot it with the apple chunks.

Now comes the fun part! Starting at the shorter side of the rectangle, roll the dough up into a log. Place the log seam side down in your prepared loaf pan and leave it to rise a second time. After that, you simply have to pop it into the oven to bake! You’ll know when the apple cinnamon bread is finished baking when it turns a lovely golden brown and sounds hollow when you tap on it. 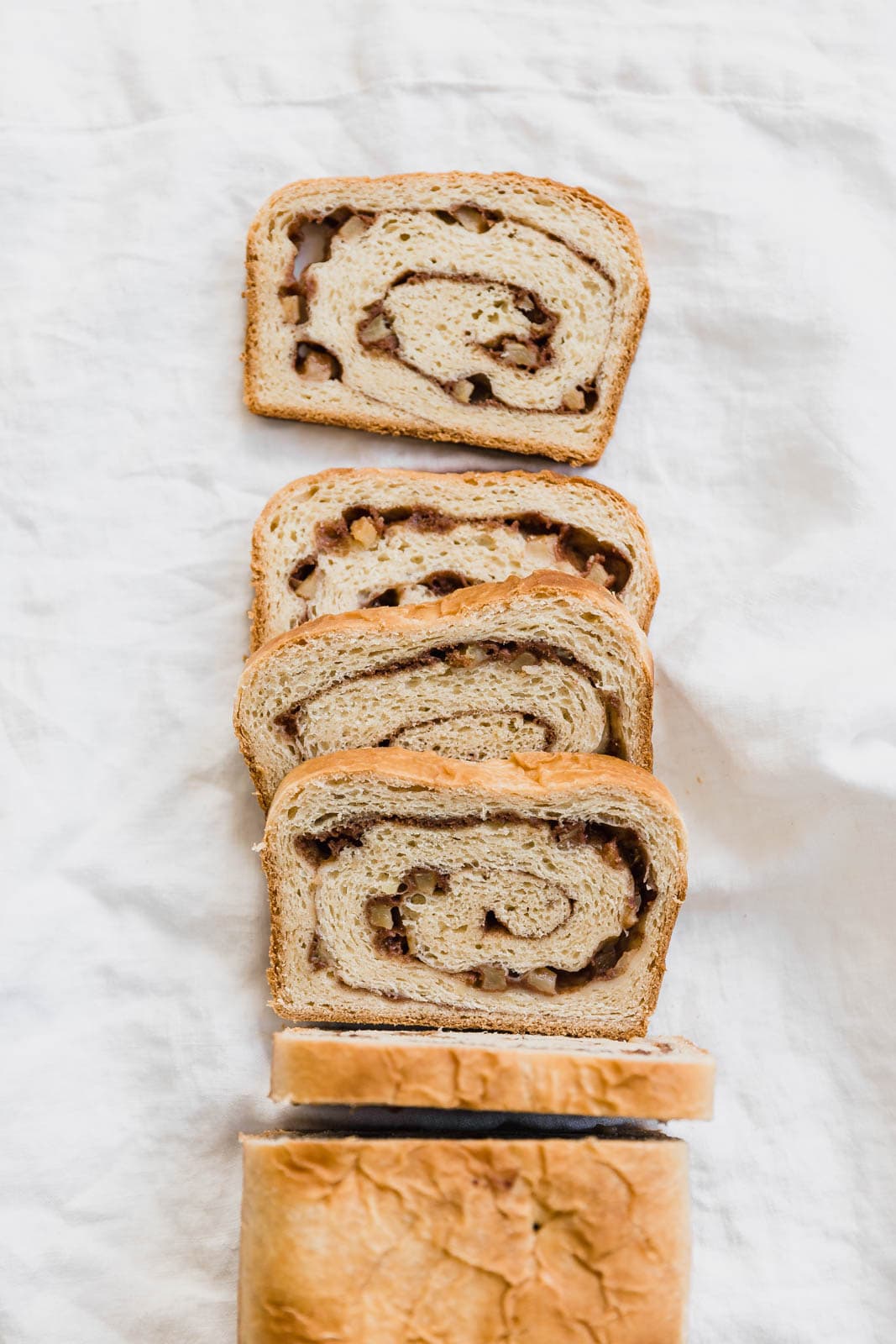 How to freeze bread

This apple cinnamon swirl bread is great to have on hand for when guests are over. To freeze the entire loaf, first let it cool to room temperature and then wrap it in 3 to 4 layers of plastic wrap. Then wrap it once more with aluminum foil and store it in the freezer. When you’re ready to eat the bread, let it sit on your counter and thaw to room temperature in its wrappings.

You can also pre-slice the bread and freeze the slices in a freezer-safe baggie. The bread might dry out a bit this way, but it’s handy to have the slices on hand whenever you’re craving cinnamon swirl toast. 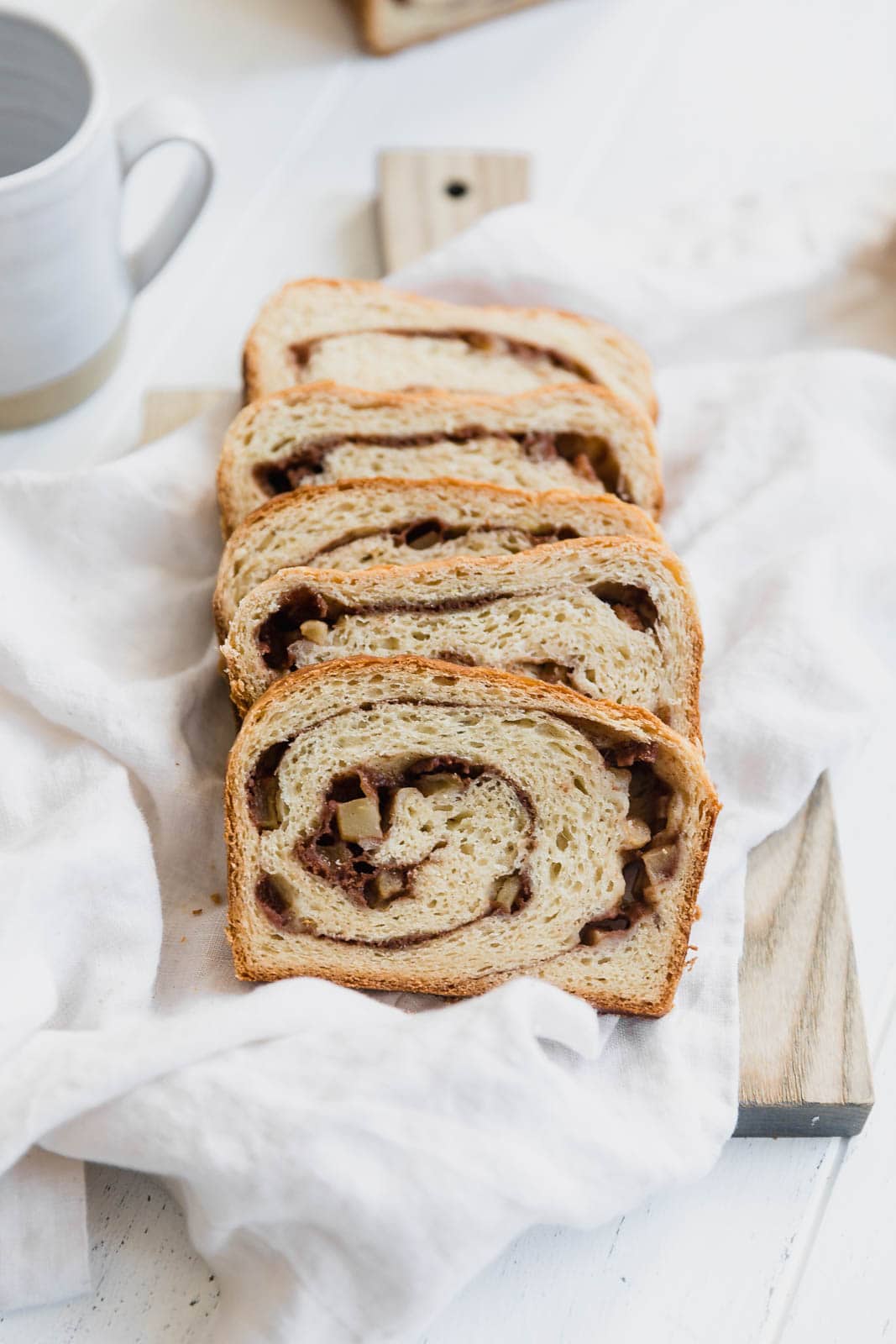 If you have any questions about making this apple cinnamon bread, leave me a comment down below! I’m happy to help any way I can 🙂

A scrumptious weekday breakfast, this soft and chewy homemade Cinnamon Apple Swirl Bread is EVERYTHING!