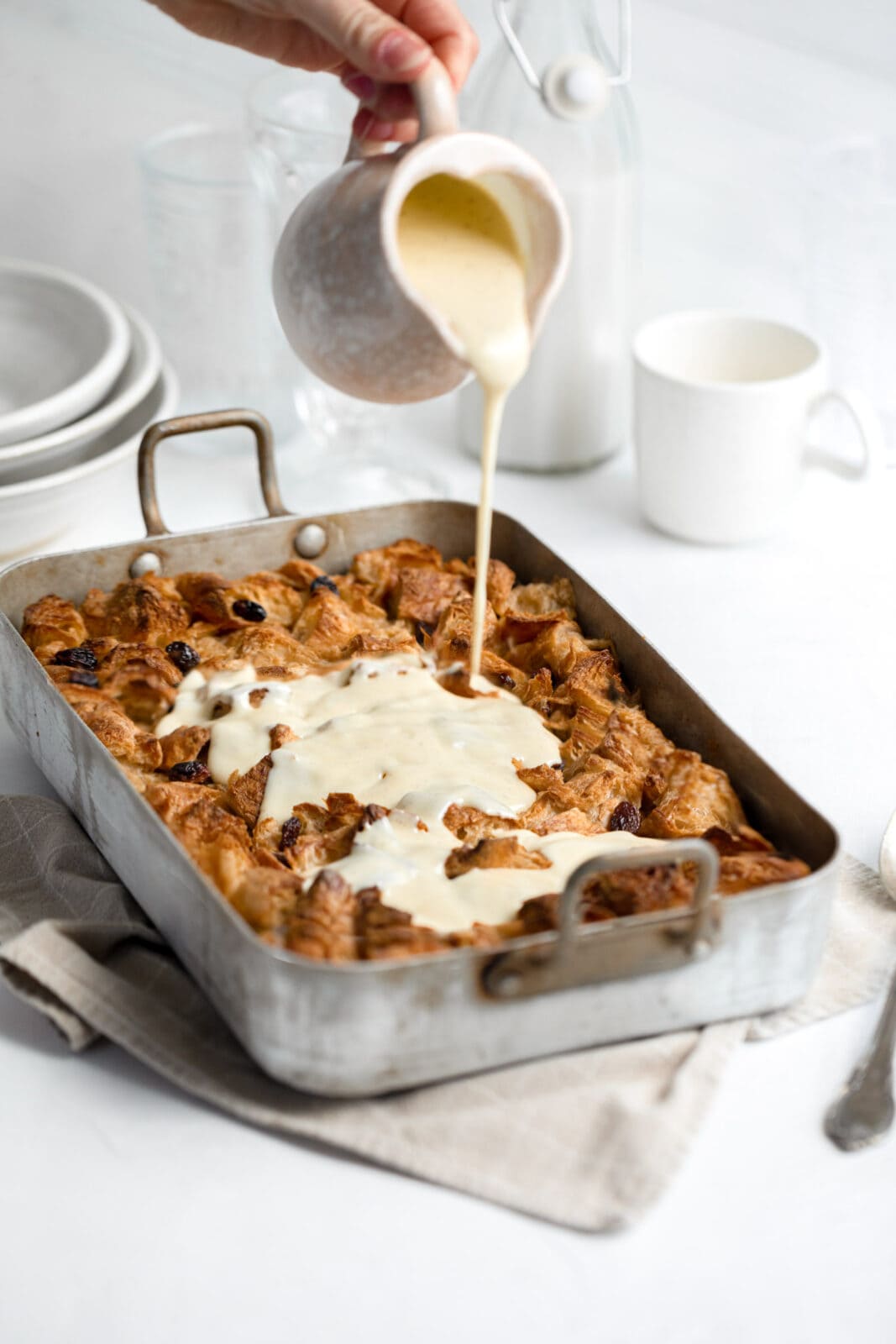 Looking for a way to use up those day old croissants or stale brioche? Introducing rum raisin bread pudding: a

Looking for a way to use up those day old croissants or stale brioche? Introducing rum raisin bread pudding: a boozy, buttery, flavorful sweet treat perfect for filling up your belly all fall and winter long! 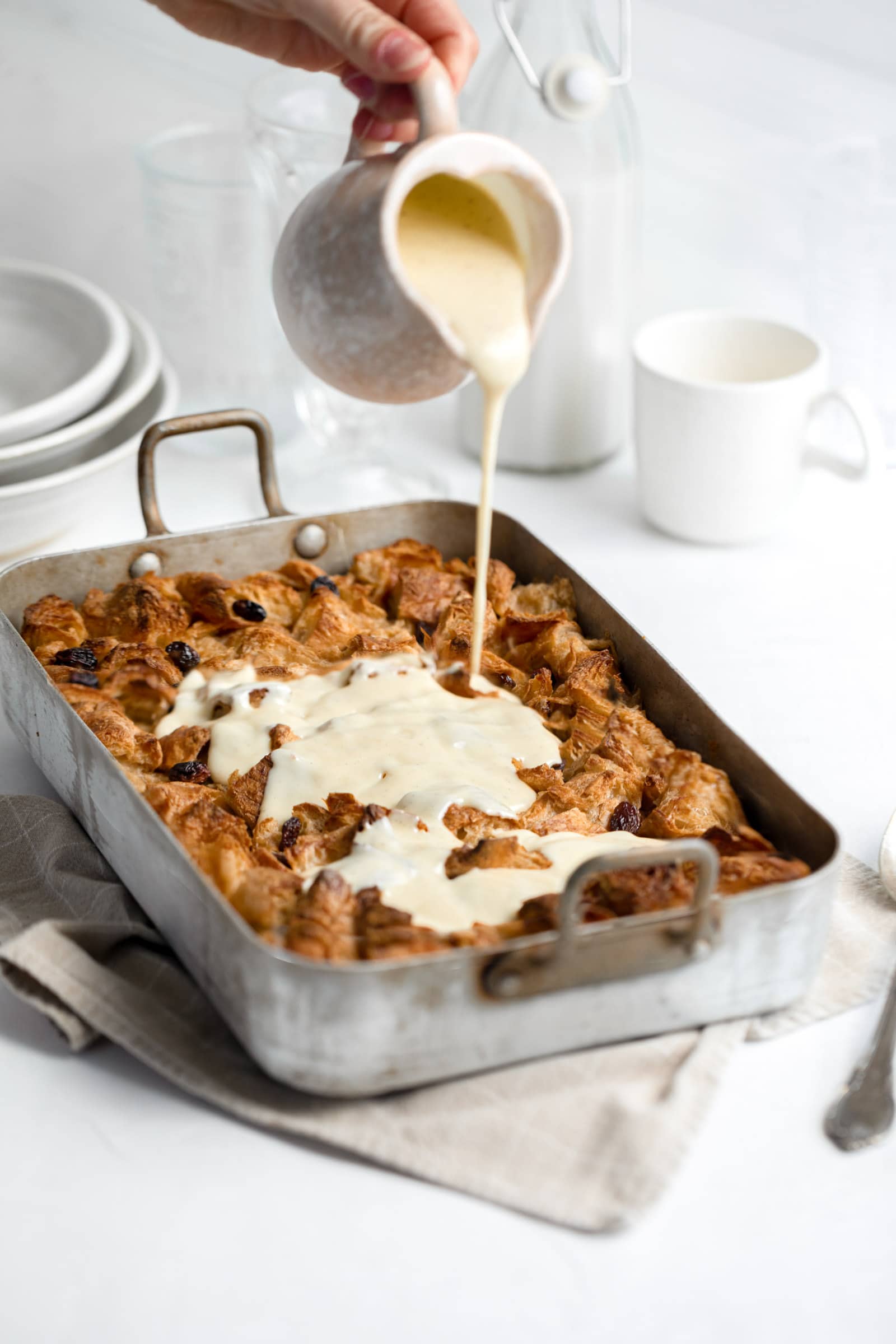 4 words: Rum. Raisin. Bread. Pudding. AKA the most scrumptious bread pudding you’ll ever have with a boozy kick, plump raisins, and the best buttered rum sauce. The rum cuts the sweetness perfectly, the juicy raisins complement the decadent croissants, and the rum sauce really pushed it over the edge…I’m salivating just thinking about it.

Now, if you’re skeptical I get it. I used to not be a big bread pudding person. I always thought of it as a mushy, bready, excuse of a dessert. Until now. You guys…this bread pudding is SO good. It’s buttery; it’s boozy; it’s perfectly sweet; and it’s super easy to make. Plus it feeds a crowd, requires virtually zero prep time and doesn’t call for any crazy ingredients. It’s the perfect heart warming, cozy dessert to fill your belly with as the temperatures start to drop. 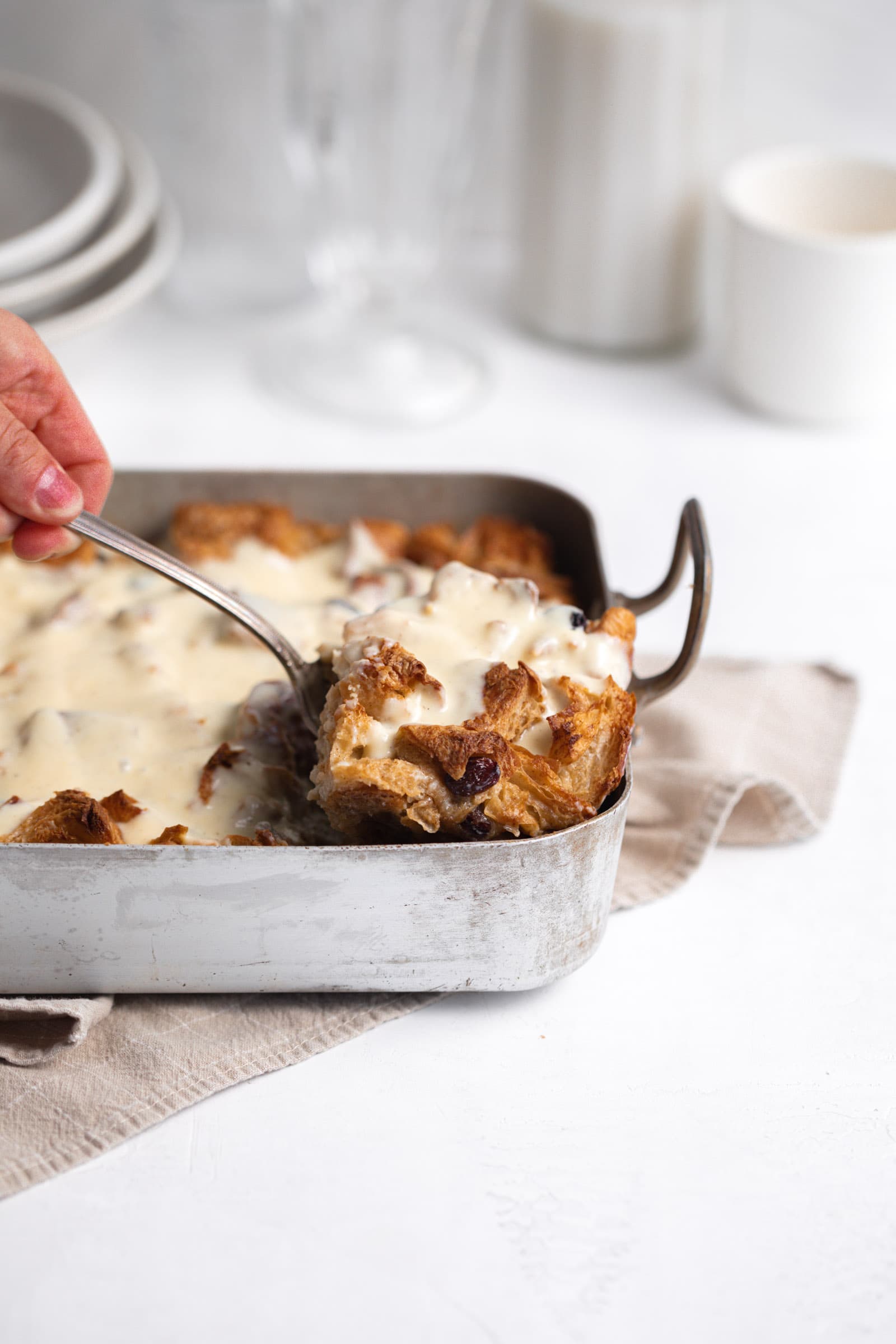 What is rum raisin bread pudding?

Well, first let’s discuss bread pudding in general. Bread pudding is a popular dessert made with bread (preferably stale bread), milk, eggs, and butter. It’s incredibly easy to make, super simple, and also really cheap. Plus it eliminates food waste and gives you a use for stale bread, which is a huge win in my book. It can be sweet or savory (hello, rosemary olive oil bread pudding) and can be made with a variety of different flavor combos. Some of the most popular are sticky toffee, buttered rum, cinnamon raisin…the options are endless.

Obviously my new favorite iteration of bread pudding is this rum raisin bread pudding. We made this rum bread pudding with a very heavy pour of rum, tons of raisins and CROISSANTS. So, like, you know it’s going to be goooooooood. To really push things over the edge we topped it with a hot buttered rum sauce. 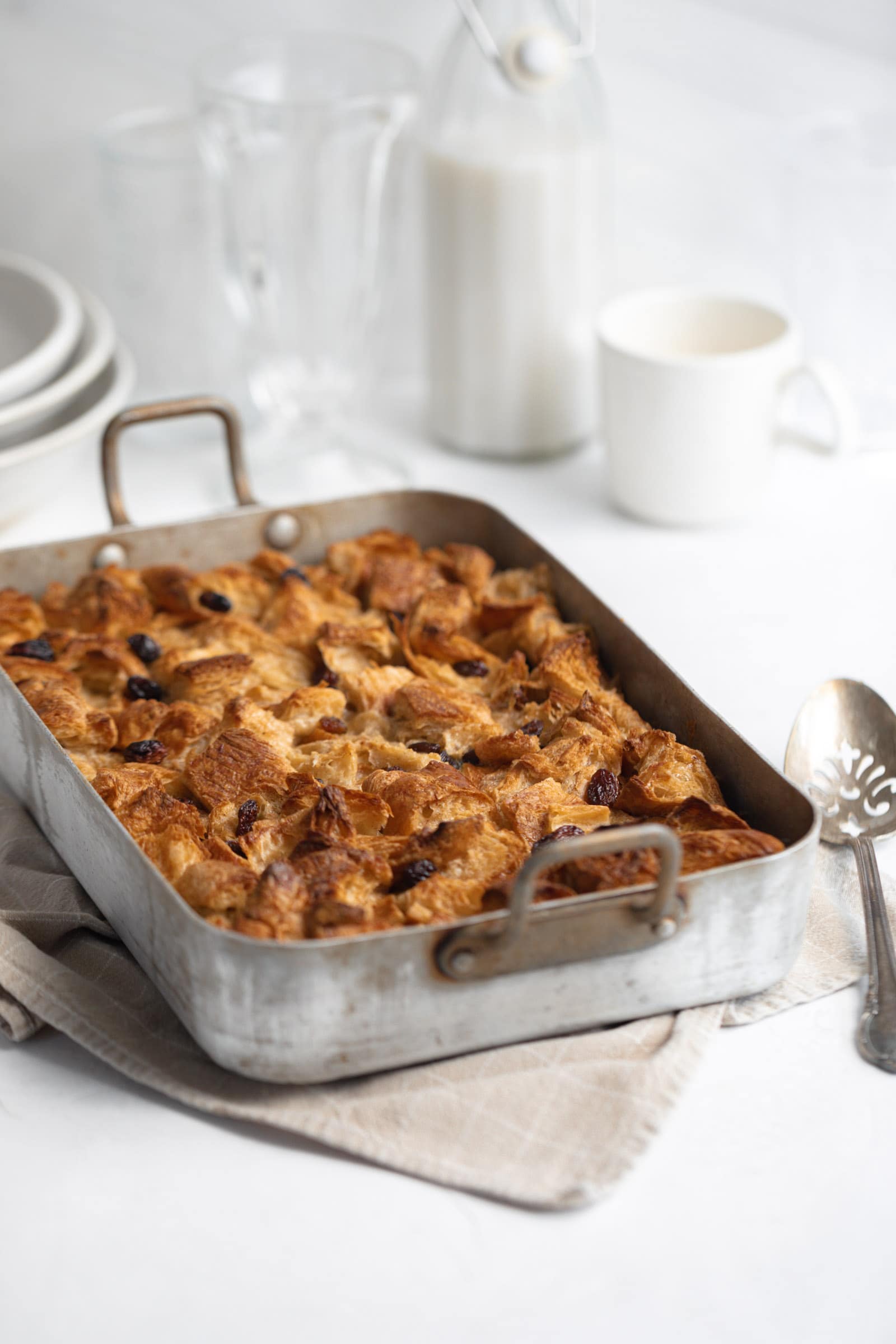 Alright, so let’s get down to the details. You’ll need these 8 simply ingredients to make this boozy bread pudding recipe. That being said, this recipe is incredibly forgiving, so feel free to use what you have on hand and tweak it to what works for you. 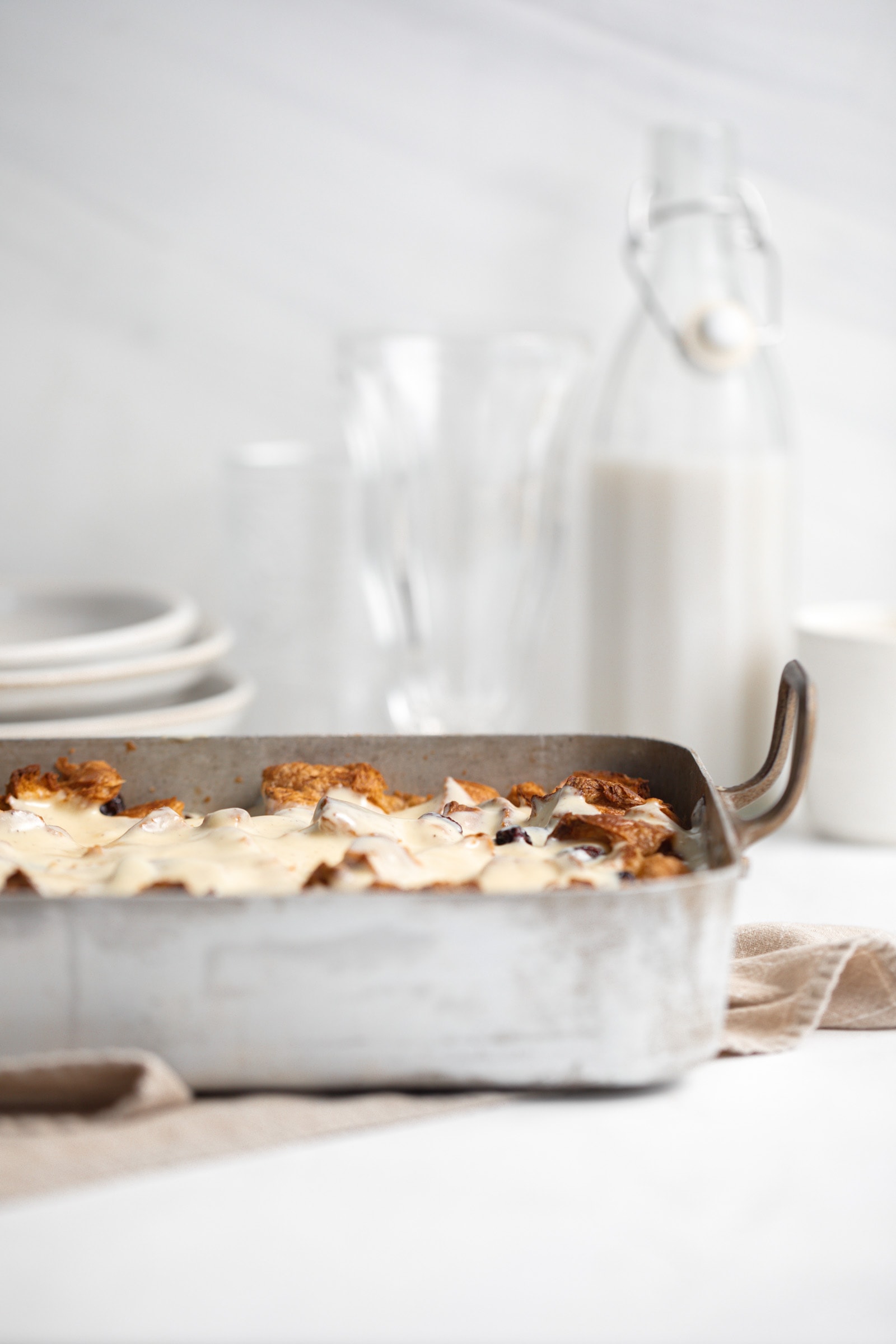 What do you need to make the rum sauce

The rum sauce is technically optional, but in my mind it’s a nonnegotiable. This creamy, sweet sauce takes this bread pudding recipe from very good to flipping fantastic.  YOU NEED IT. 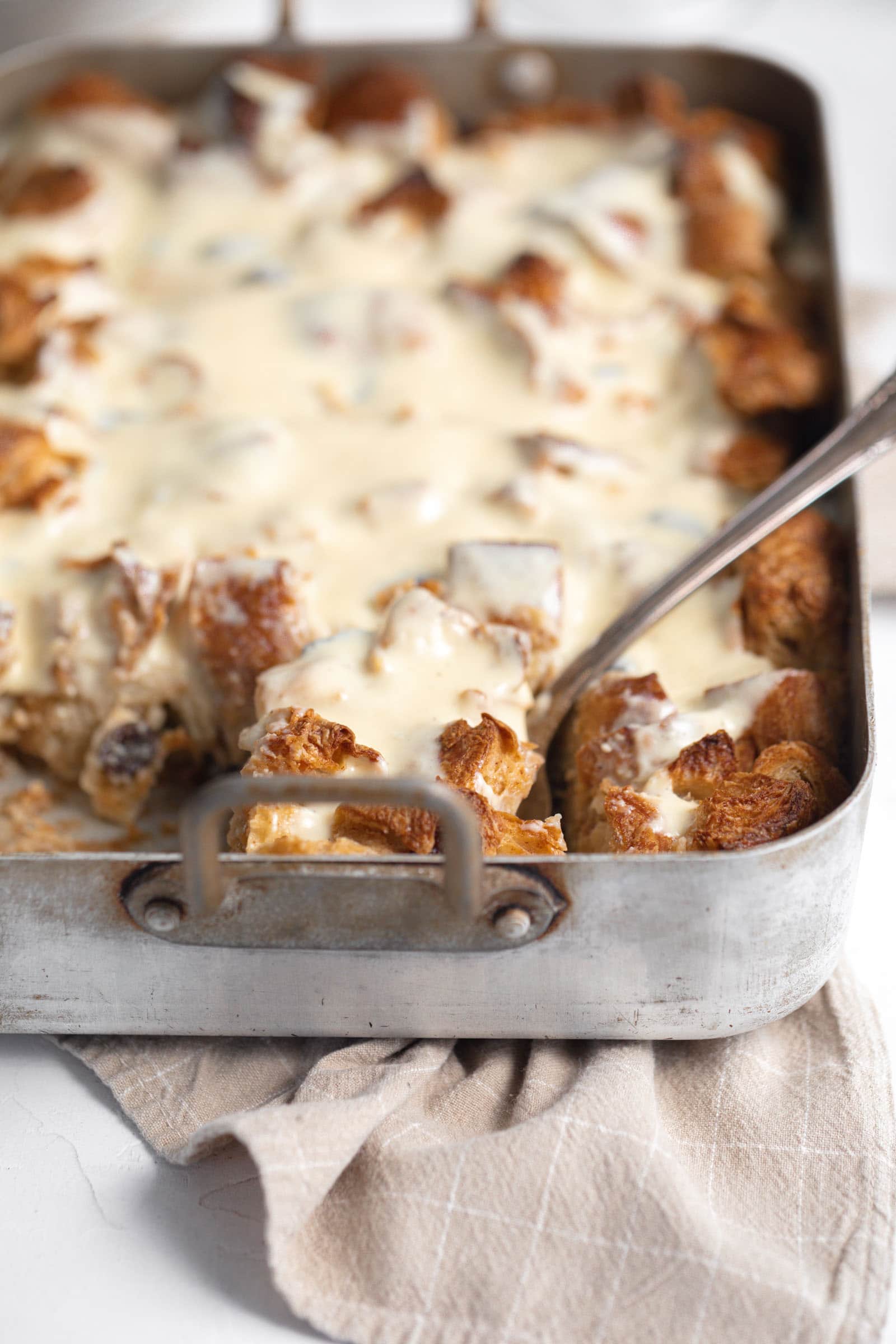 Why you need to make bread pudding 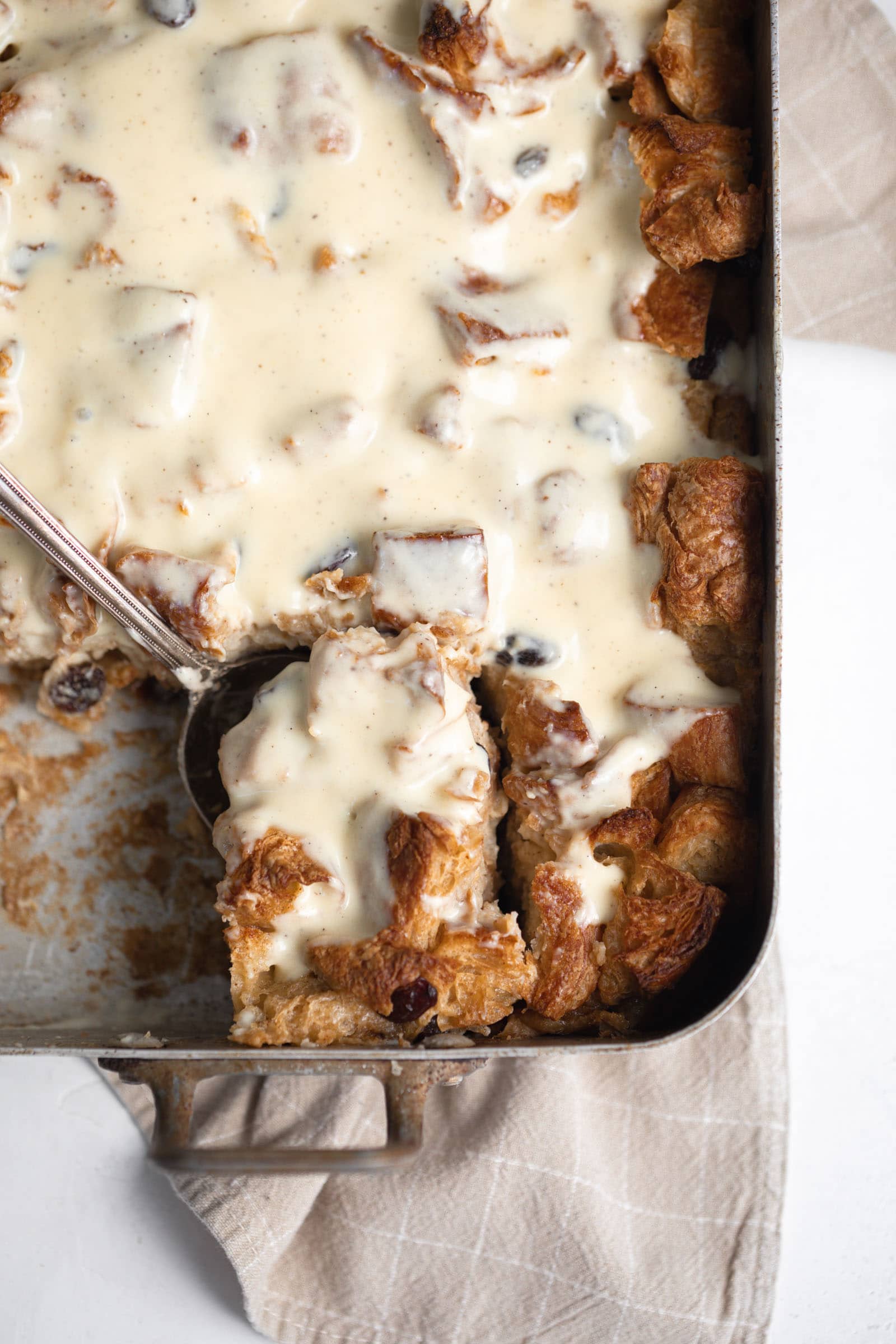 for the rum raisin bread pudding

for the buttered rum sauce