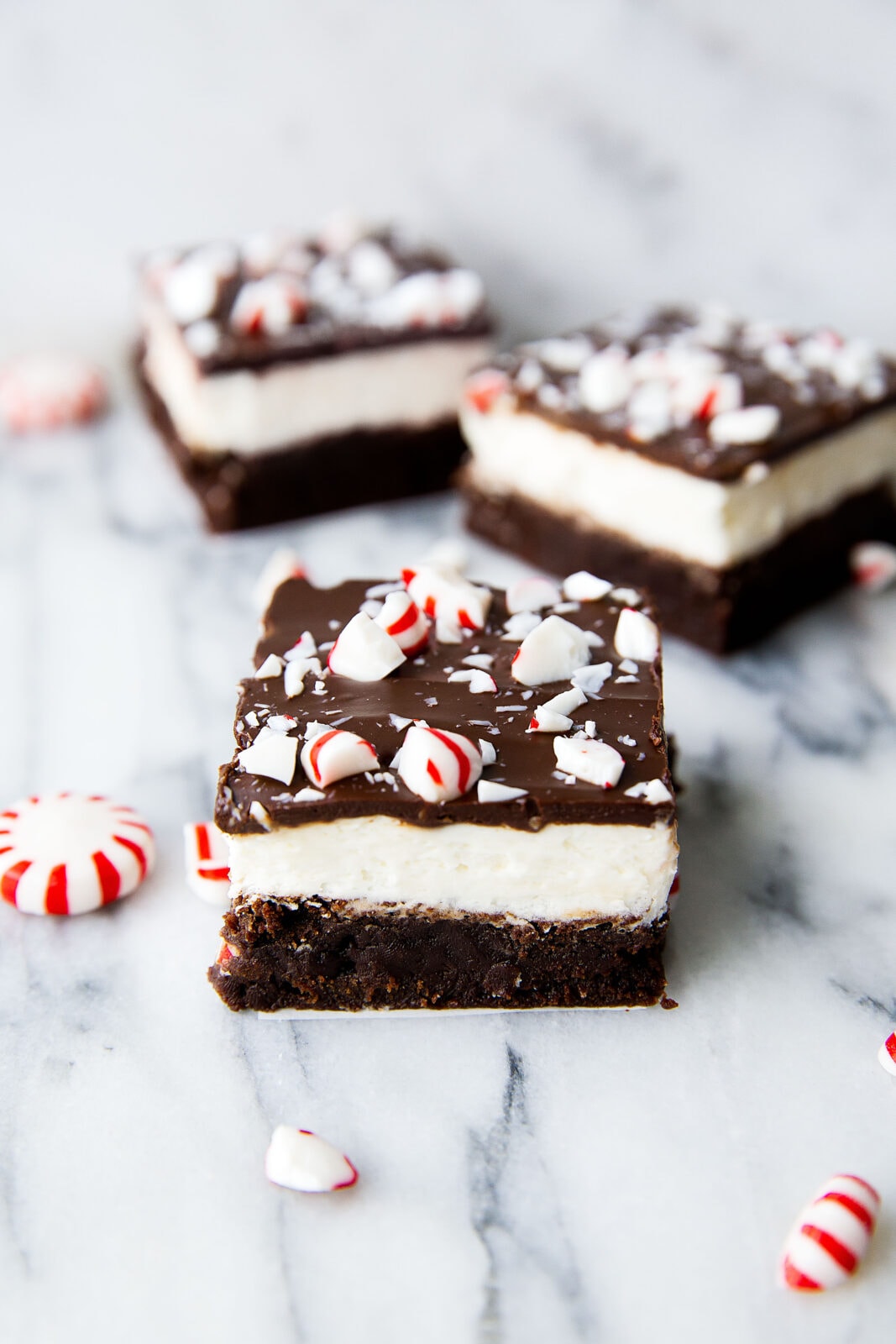 So it’s December and I’m pretty sure that means cookie season? Don’t worry, we’ll get there. But because it’s Wednesday 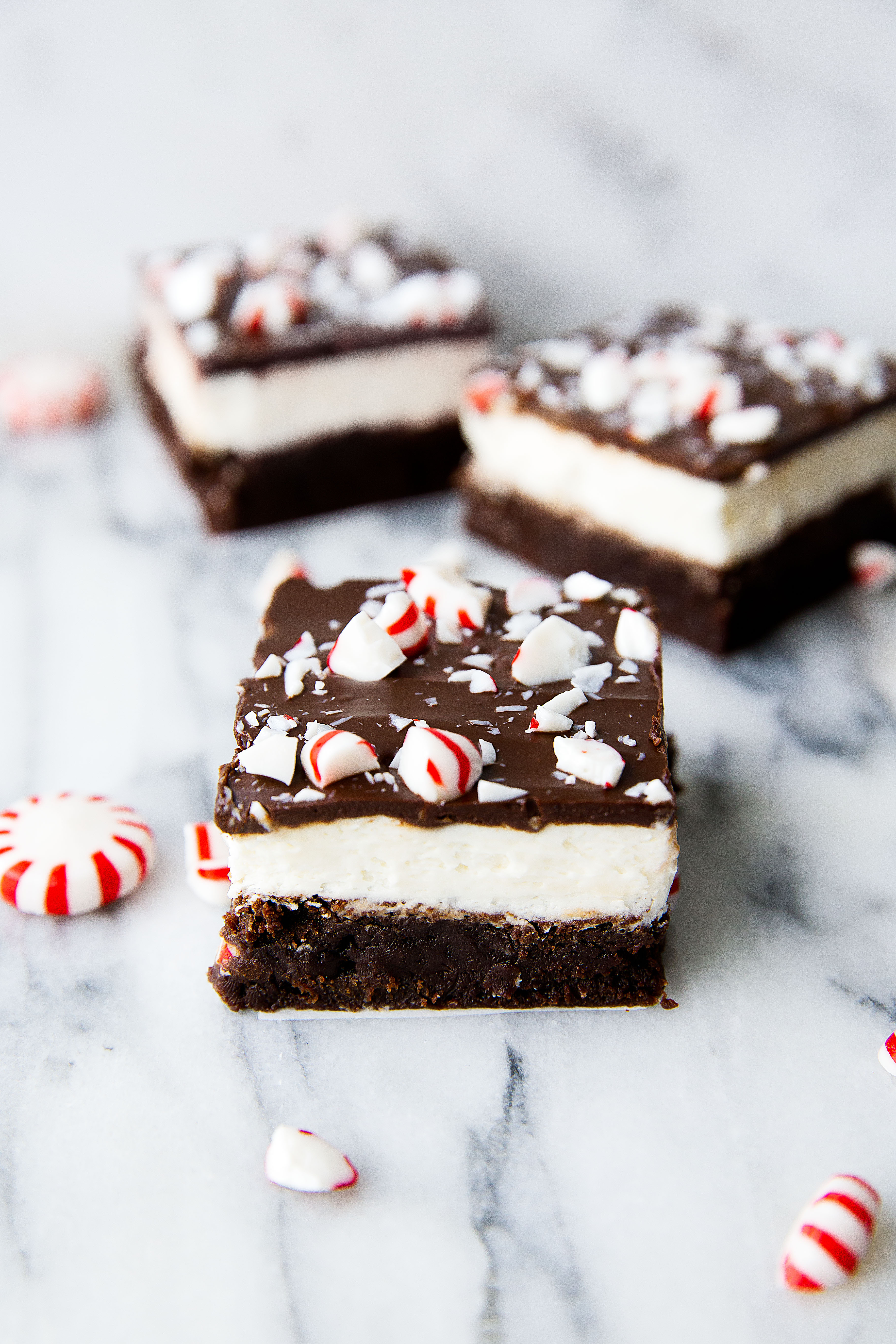 So it’s December and I’m pretty sure that means cookie season? Don’t worry, we’ll get there. But because it’s Wednesday and I’m definitely a fan of a weekly brownies post, we’re doing brownies today. Peppermint bark brownies, that is. HOW BEAUTIFUL ARE THEY?

I posted a very similar recipe in 2011, but as they have become such a hit in our household, I had to share this updated version with you. Rebe and I were on the phone today and she goes “I don’t even like peppermint and they’re one of my favorite desserts ever.” I feel the same. It really doesn’t matter if you like peppermint or not. You will like these peppermint brownies. 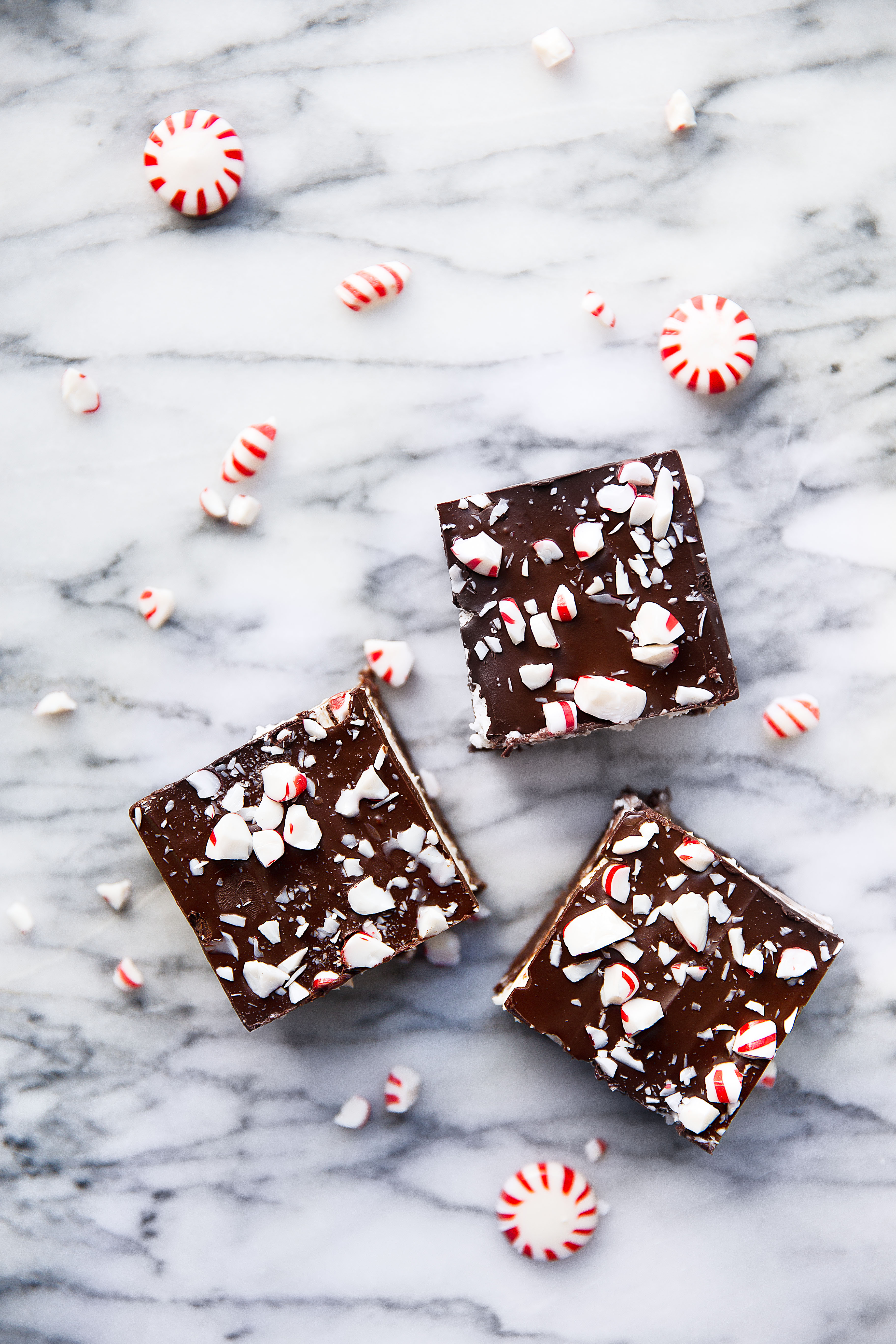 I hated peppermint…but not anymore!

OK let’s pause and I can tell you a funny story about mint. Growing up in New England, my dad used to take Rebe and I on multiple skiing trips every winter. The first time I skied I think I was 5 years old. My dad would hold me in between his legs the entire way down the mountain. It was hilarious.

Moving on because this story actually has nothing to do with skiing. So one Sunday we were driving back down to Boston and I was in the backseat. My mom is a huge tic-tac fan, and she gave Rebe and me a bunch of tic-tacs for the weekend. Rebe had orange (the best), and I had spearmint. Well, I decided to lie down in the backseat of the car. I then proceeded to eat a.ton. of spearmint tic-tacs.

Pretty soon I felt nauseous. I managed to keep everything down, but boy did I feel awful. I started to get a headache, too.

Without any further details, I will just say that I haven’t enjoyed spearmint since. Any time anyone hands me spearmint anything I cringe. I just can’t handle it. Ick. 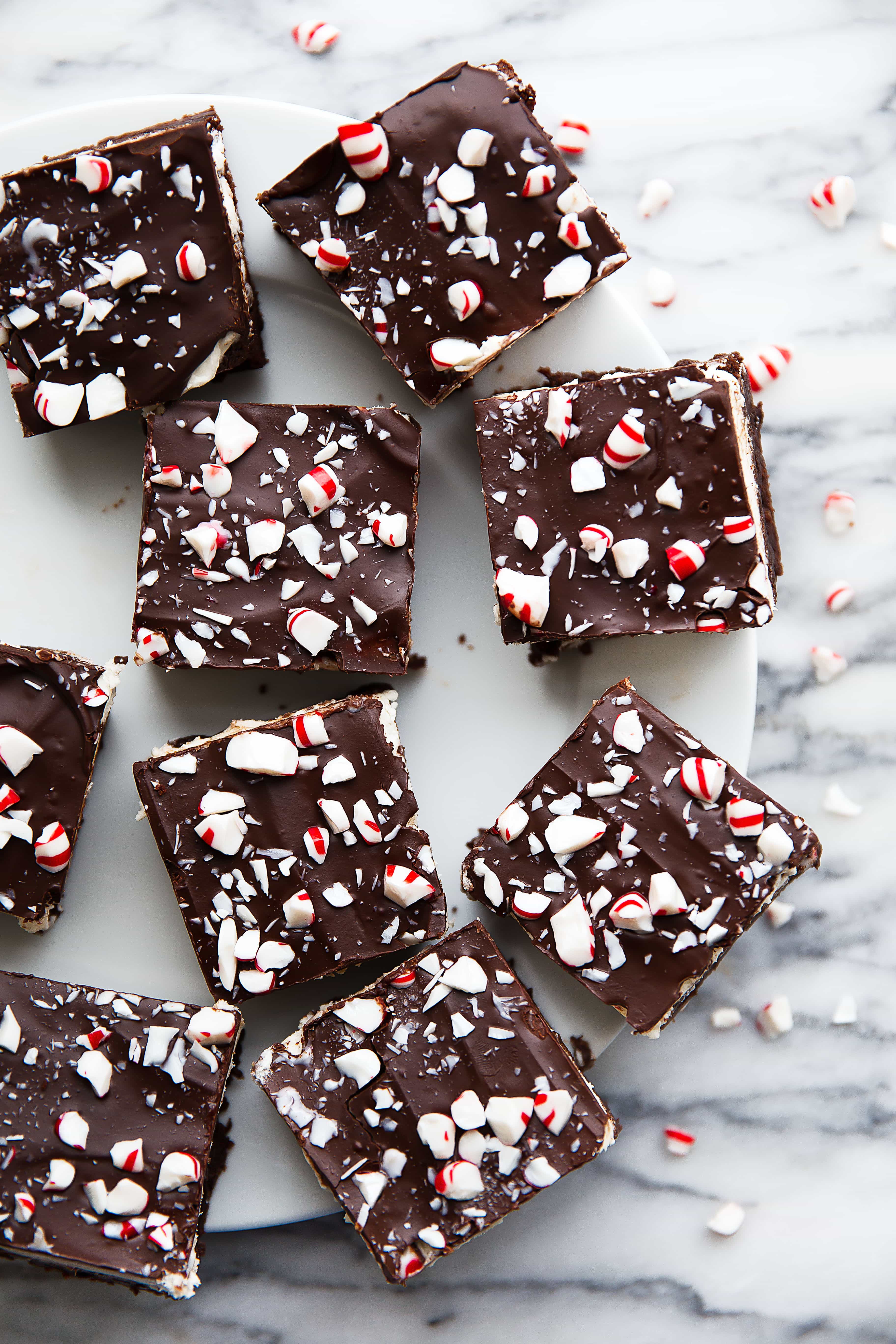 Each step of these peppermint bark brownies is super easy, but these babies do require some assembly work and chill time to set properly. The basic steps for this ballin’ peppermint brownie recipe are as follows:

Make the peppermint brownie base

The instructions for making the brownies are nothing out of the ordinary. But there are a few things I wanted to touch on: first, the brewed coffee is totally optional, but it really does help these brownies taste even better. You won’t taste the coffee at all, but it brings out the rich chocolate flavor even more and is an absolute game changer!

Third, slightly under bake these brownies to ensure they’re extra fugdy and delicious. Not by a whole lot, but just barely under baking them makes a big difference.

Once the brownies have baked, you’ll need to let them cool completely before frosting them.

You want to make sure you’re using room temperature butter to make the homemade peppermint frosting. If the butter is chilled, the frosting won’t whip up properly and you’ll wind up with chunks of butter in it (ew). And if your frosting is too thick for your liking, add just half a tablespoon of milk into it at a time to loosen it up.

Once you’ve frosted the chilled brownies, place the pan back into the fridge for 15 minutes or so.

The peppermint bark topping is a simple mixture of butter and chocolate. Simply melt it, and then spread it over the chilled, frosted brownies. Sprinkle the top with crushed peppermint candies and then chill the brownies until the topping is set. 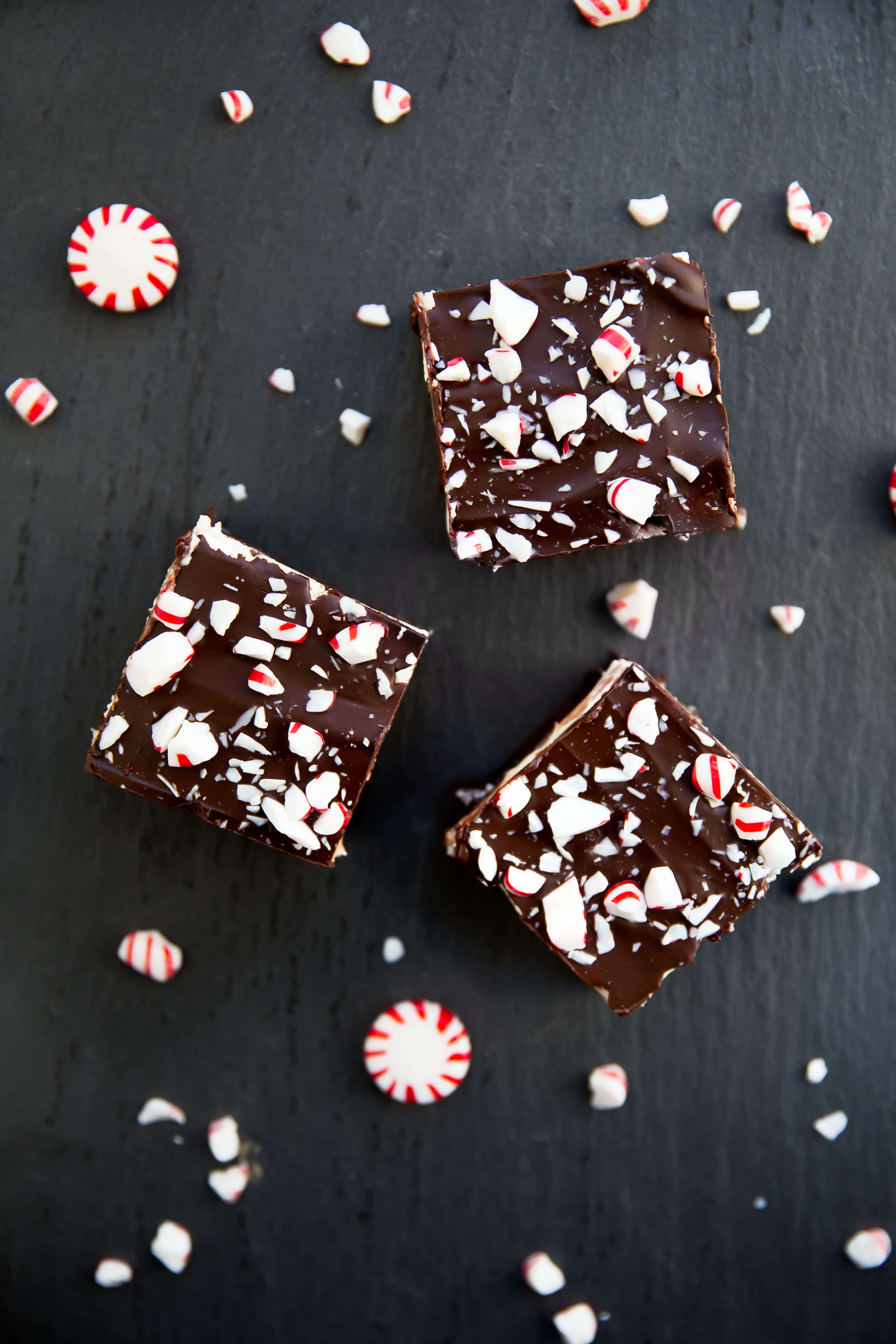 What is better than a fudgy brownie base with a hint of peppermint, fluffy, rich, minty frosting, and more chocolate on top?! Not much, babes. Not much.

For the peppermint frosting 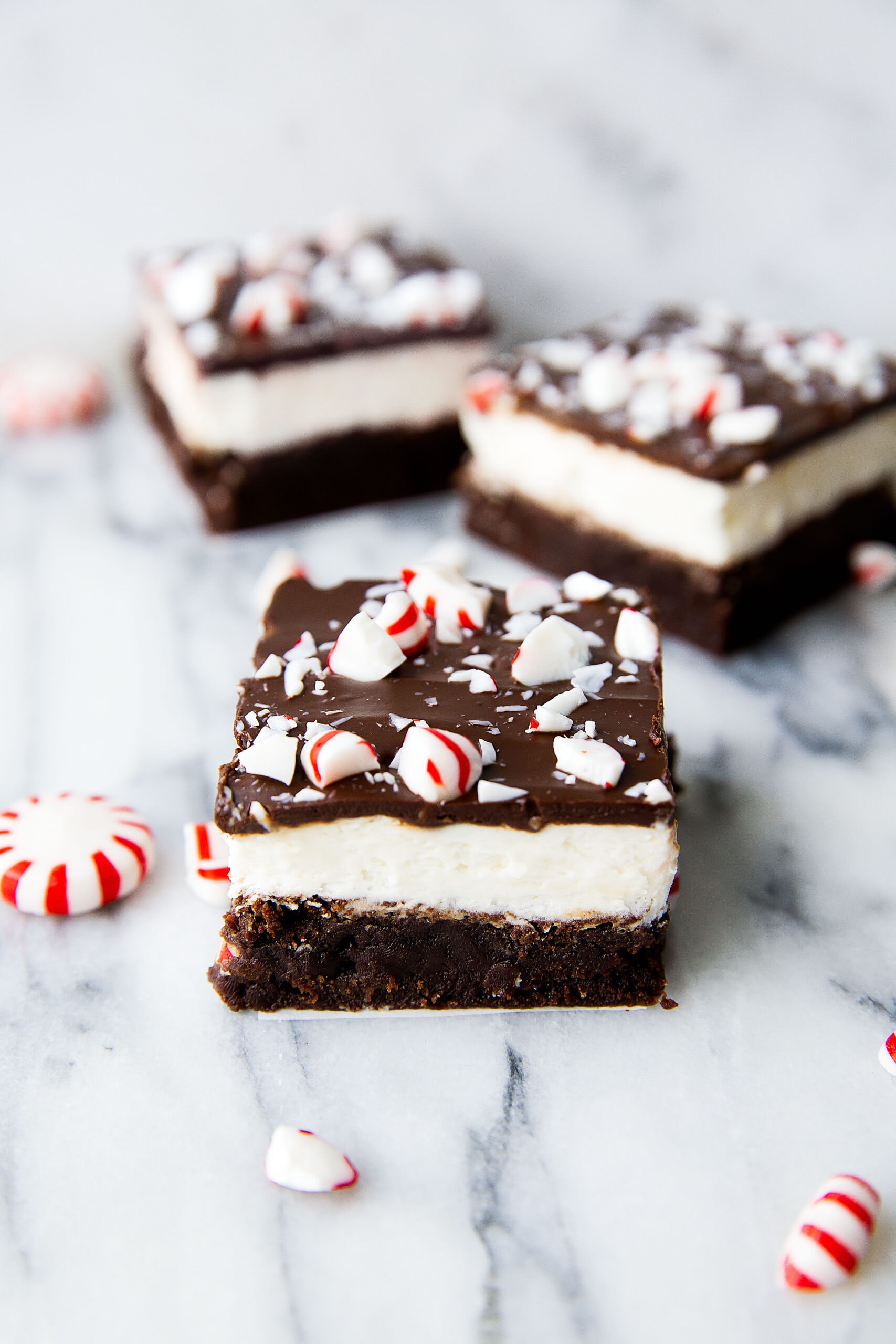