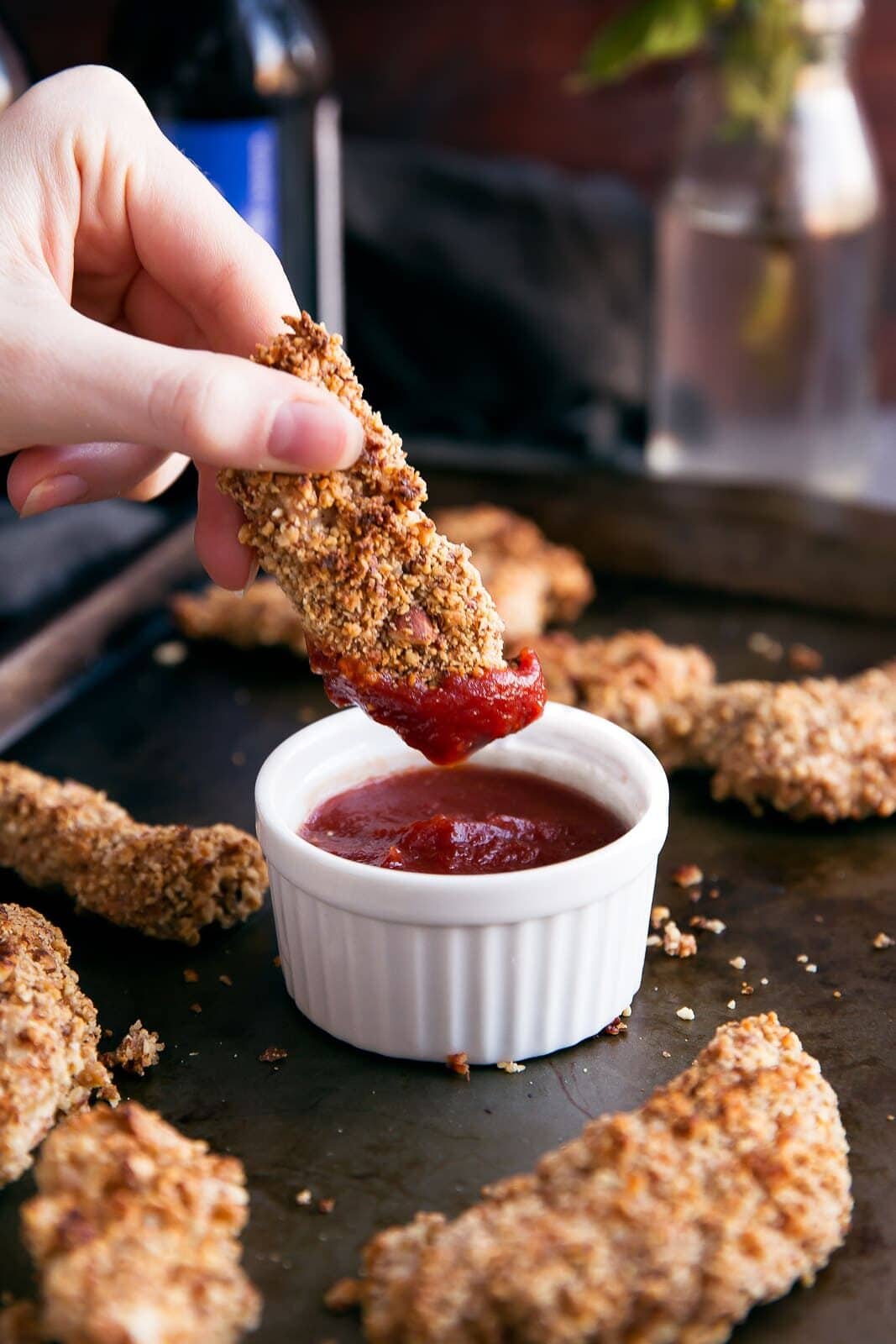 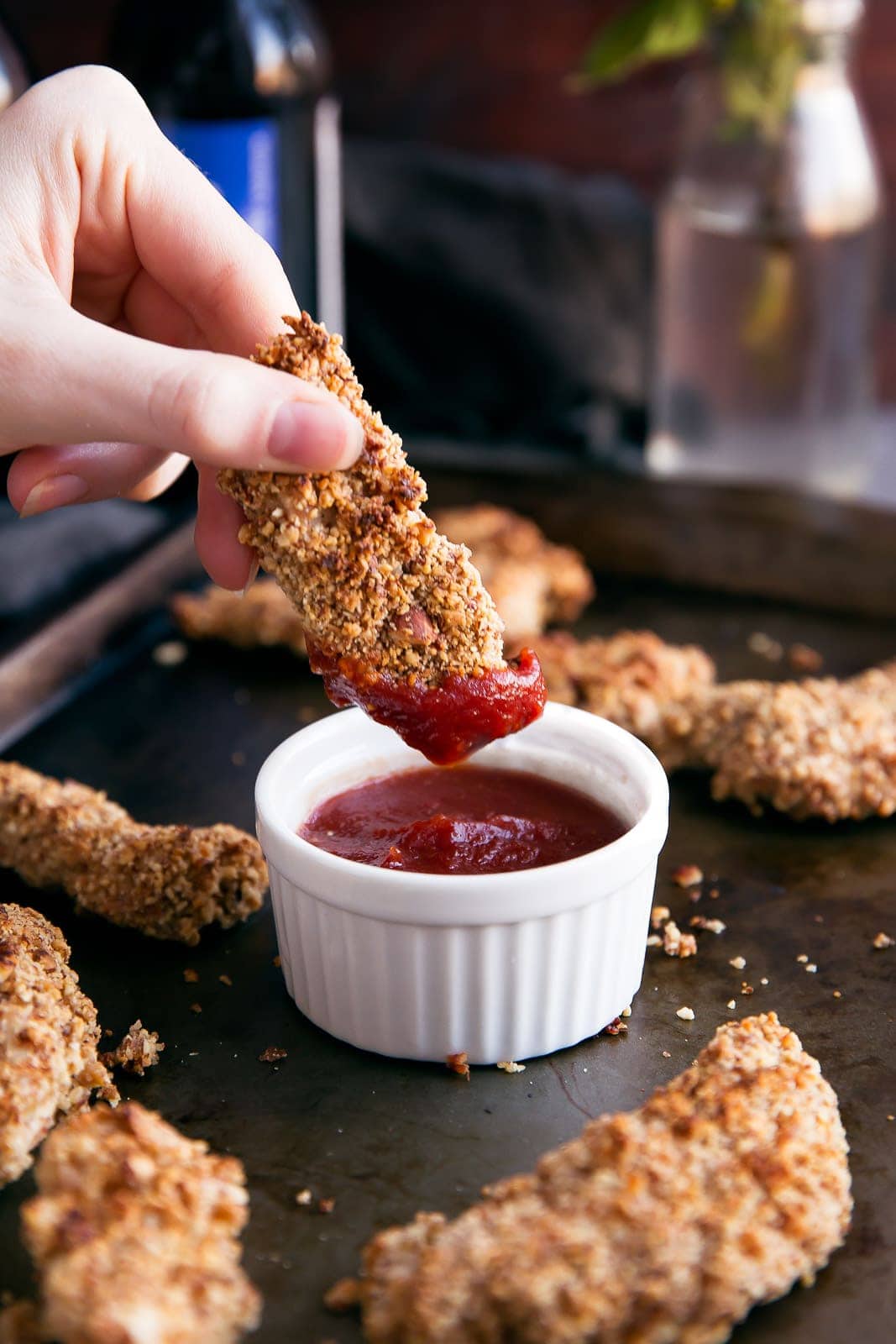 What makes for the perfect game day snack

Football season is in full swing, and that means game day snacks are on my agenda. Growing up in a football household, Sundays were aptly deemed “Football Sundays.” The dads would sit around drinking beers and watching the game, while the kids would run around the house tossing a kid-sized football between bites of delivery pizza.

Now that I’m an adult, I spend game days watching with my boyfriend. We’re the ones sitting on the couch drinking beers, our eyes glued to the TV. Not much has changed, except I’ve swapped mediocre pizza for homemade game day snacks.

Game day snacks, in my opinion, have two key characteristics. They are bursting with flavor, and can be picked up with your fingers. Dips, chips, wings, and things. 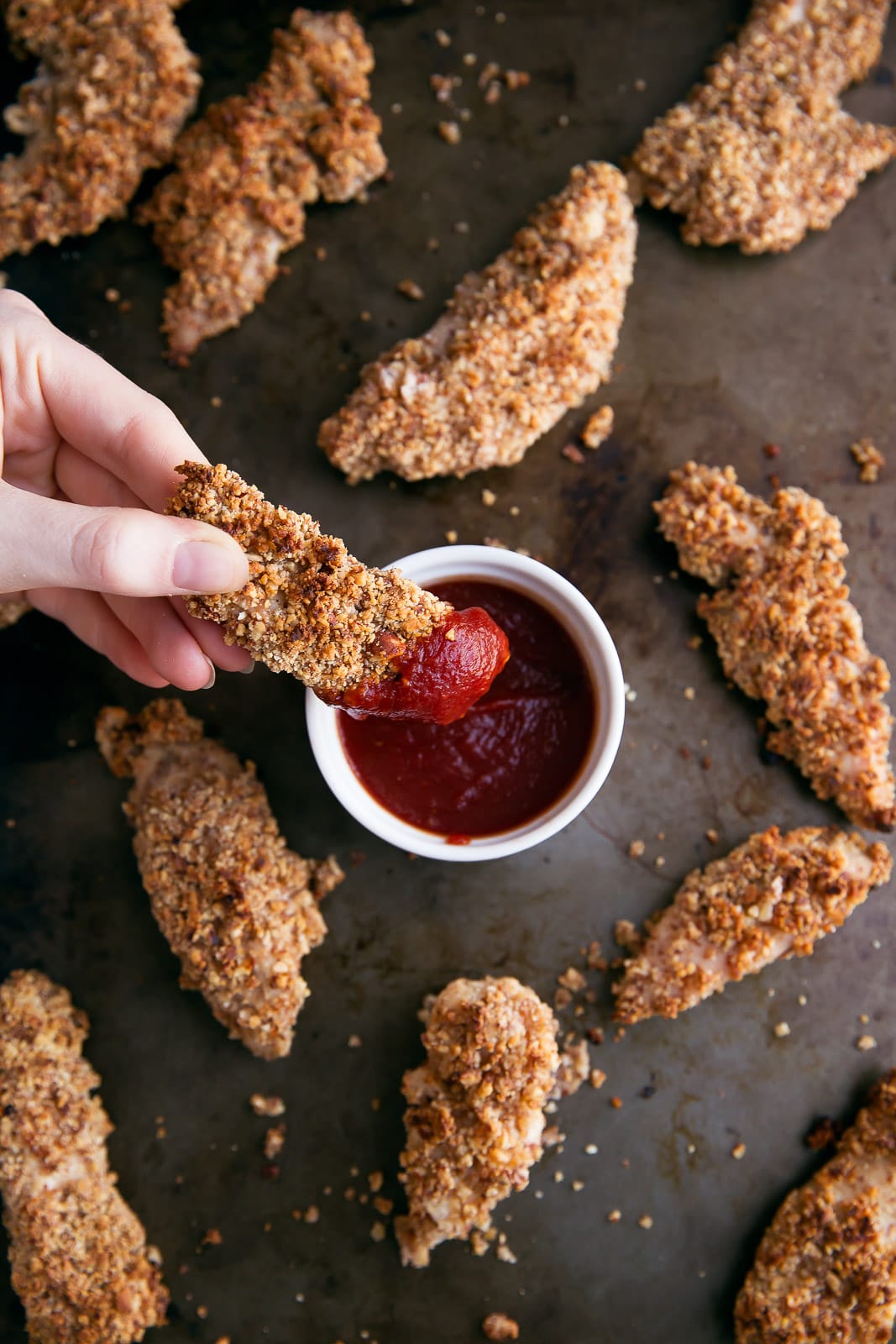 These Wasabi-Almond Crusted Chicken Tenders are my new favorite Sunday snack. They’re made with Wasabi & Soy Sauce Almonds. Like woah, guys. The only way I can describe how good these are is the following:

Scene: Car, coming home from yoga. Rebe has brought the package of Wasabi & Soy Sauce Almonds and hands them to Me.
Me: (eating almonds) holy s***, these are amazing.
Rebe: yeah? that’s great.
Me: (chomping down) no like these are SO good.
Rebe: uhh, don’t you need those for your post?
Me: (scarfing) I CAN’T HELP MYSELF I’LL JUST HAVE TO GET MORE AT THE STORE

Plus, almond crusted chicken is a flavor party in your mouth like no other. It’s savory and salty and protein-y all at the same time. The wasabi and soy combo brings it to another level entirely. 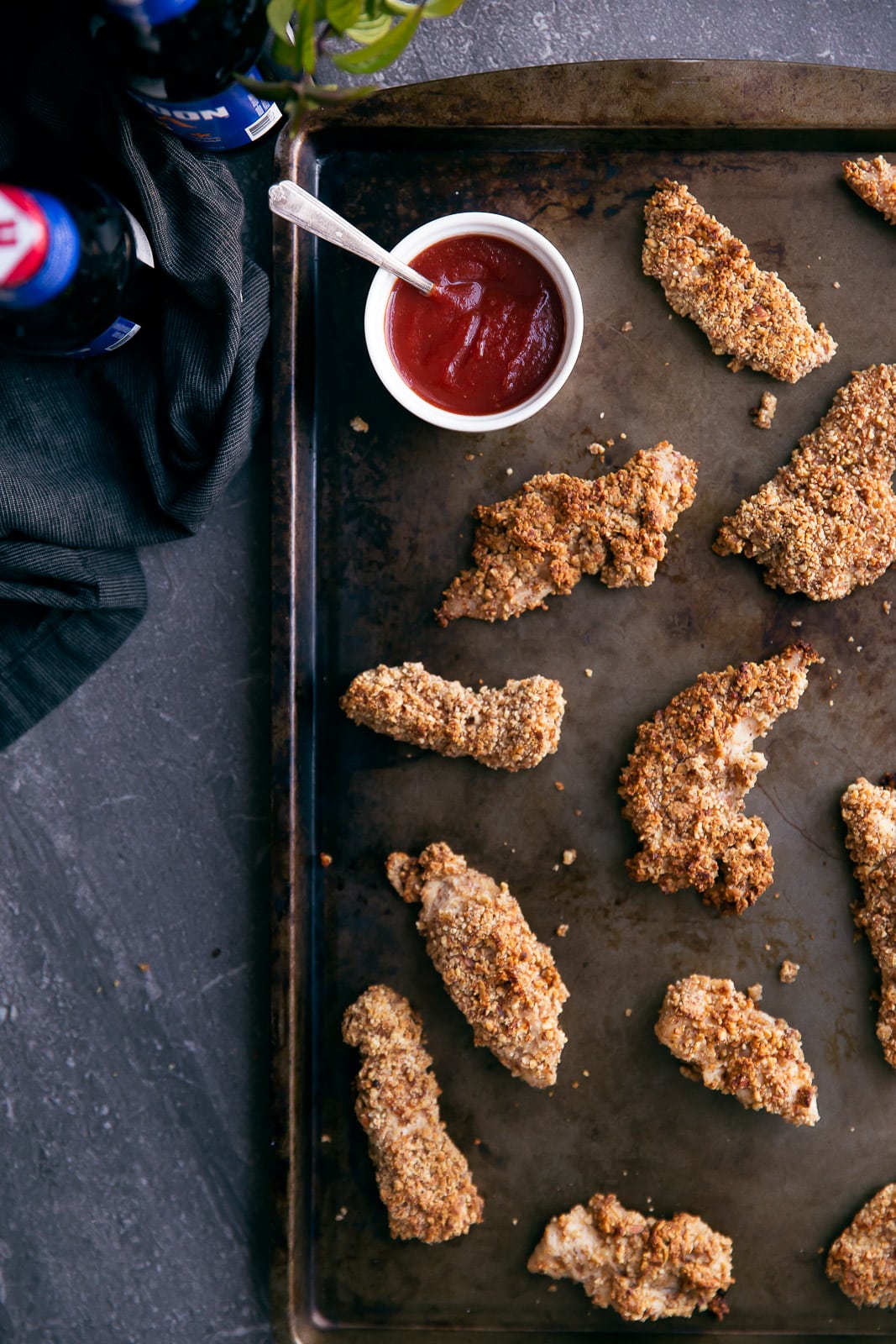 Don’t blend the almonds too finely — Yes, you want the crushed almonds to stick to the chicken tenders, but if you make them too fine there won’t be any additional crunch to these tenders. And you want that crunch. So pulse the wasabi almonds in a food processor, but only until they’re just crushed up.

Cut the chicken evenly — To ensure that these almond crusted chicken tenders bake at the same rate, do your best to cut them into even-sized strips. Obviously, some variation in size is normal, but you want them to be fairly similar in size and shape. 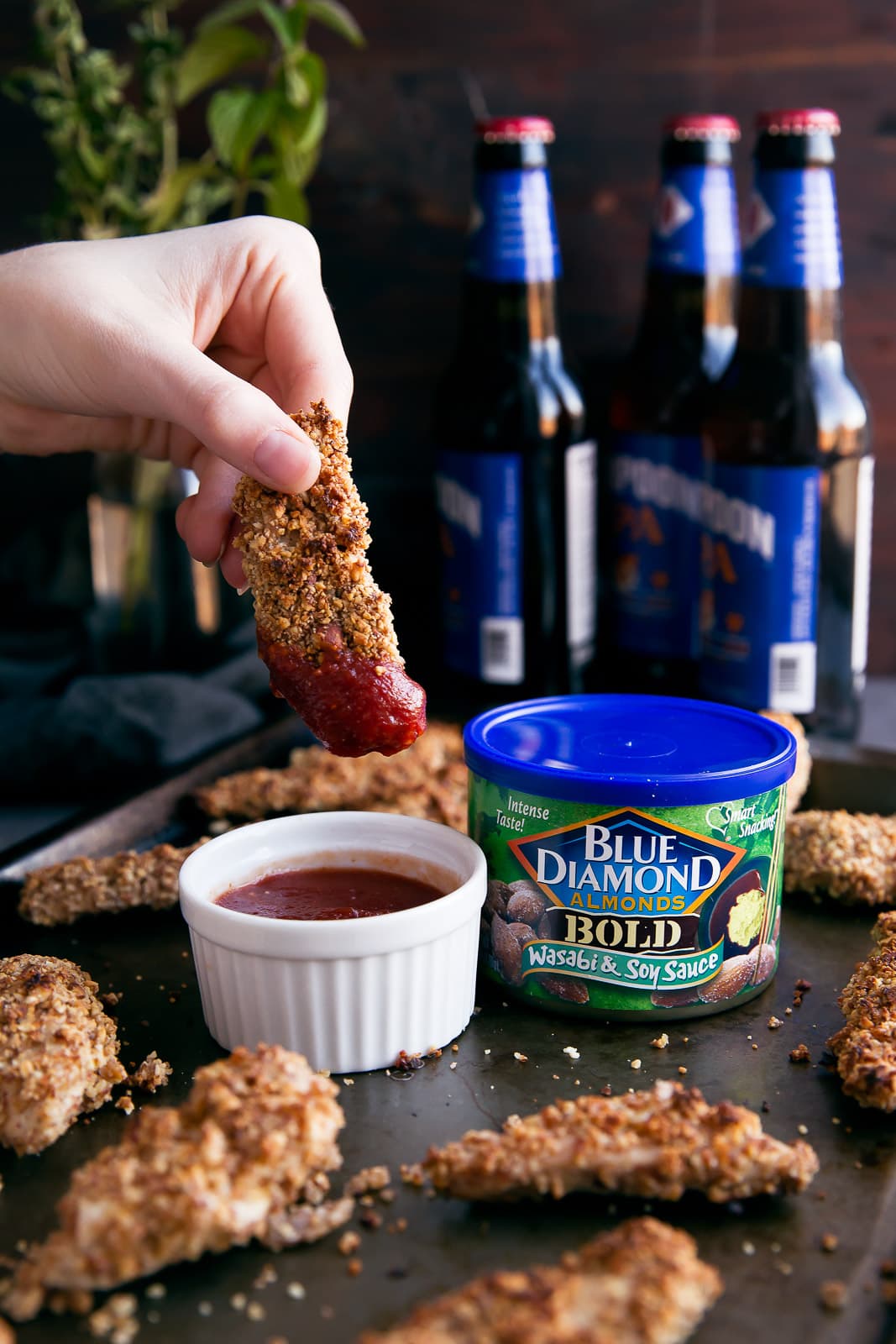 Though I miss the days of tossing a tiny tike football around the house, I wouldn’t trade these tenders for delivery pizza any day. I’m happy to be an adult 🙂

For the chicken tenders

For the sriracha ketchup

This post is sponsored by Blue Diamond Almonds. Ditch the chips and grab some Game Changing Flavors this football season!