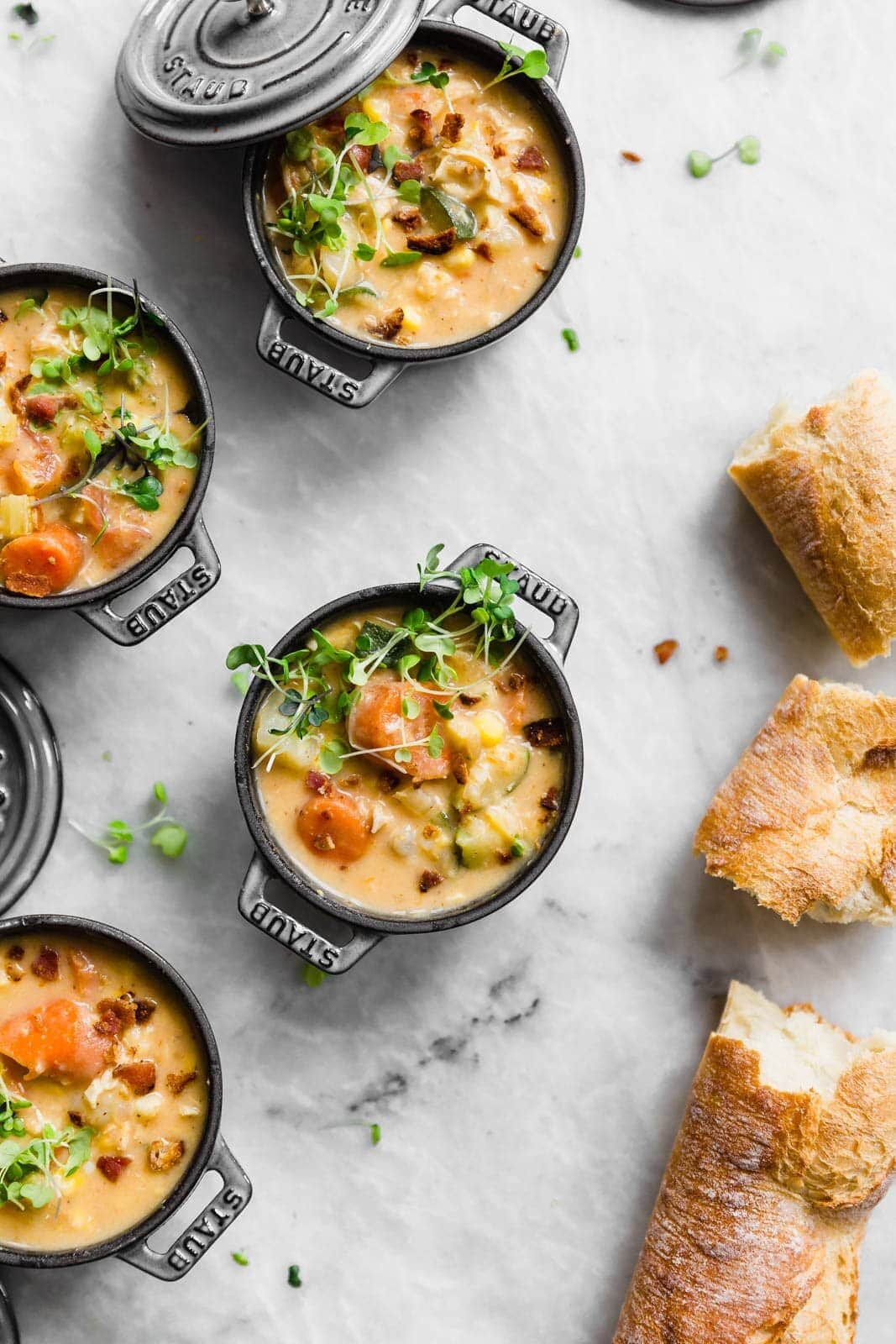 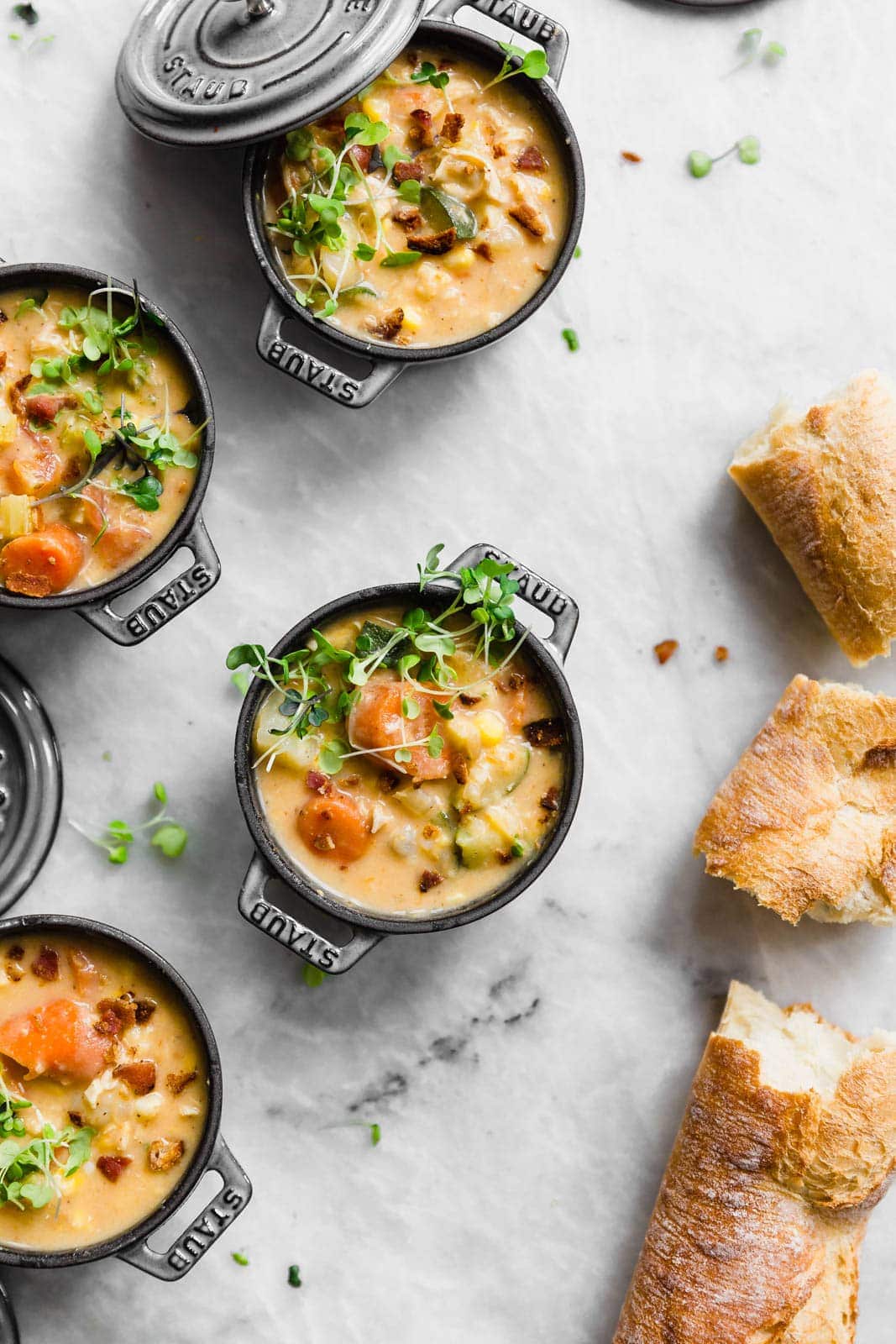 Small things I do when I’m anxious

One of my favorite things in the colder months is a huge pot of soup that you can eat for days. Something comforting that sticks to your ribs, but that also still feels healthy. Ideally, something that is chock full of vegetables, too.

Oh, so like this Lightened Up Creamy Chicken Corn Chowder. Oh how convenient! 🙂

But before we jump into this bomb soup recipe, I wanted to chat a little bit about the anxiety I’ve been feeling lately. I’ve been away a lot this summer. I don’t even know what I’ve been doing, I’ve just been home one week and gone the next. This week, I got back from visiting Alex at his current away rotation in Chicago, and I found myself feeling so anxious at home. No matter how much I accomplished, I had this air of stress looming over me.

Like yesterday. I woke up early, worked out, went to the grocery store, recipe tested 4 things, shot 1, and answered all my emails. And yet I felt unaccomplished. Like I wasn’t doing enough.

So I started cleaning the house. I put everything away that didn’t need to be out, cleaned out cabinets in the kitchen, and threw out random things that were lying around. And just like that, I found myself feeling better. My anxiety began to dissipate. My head stopped buzzing. 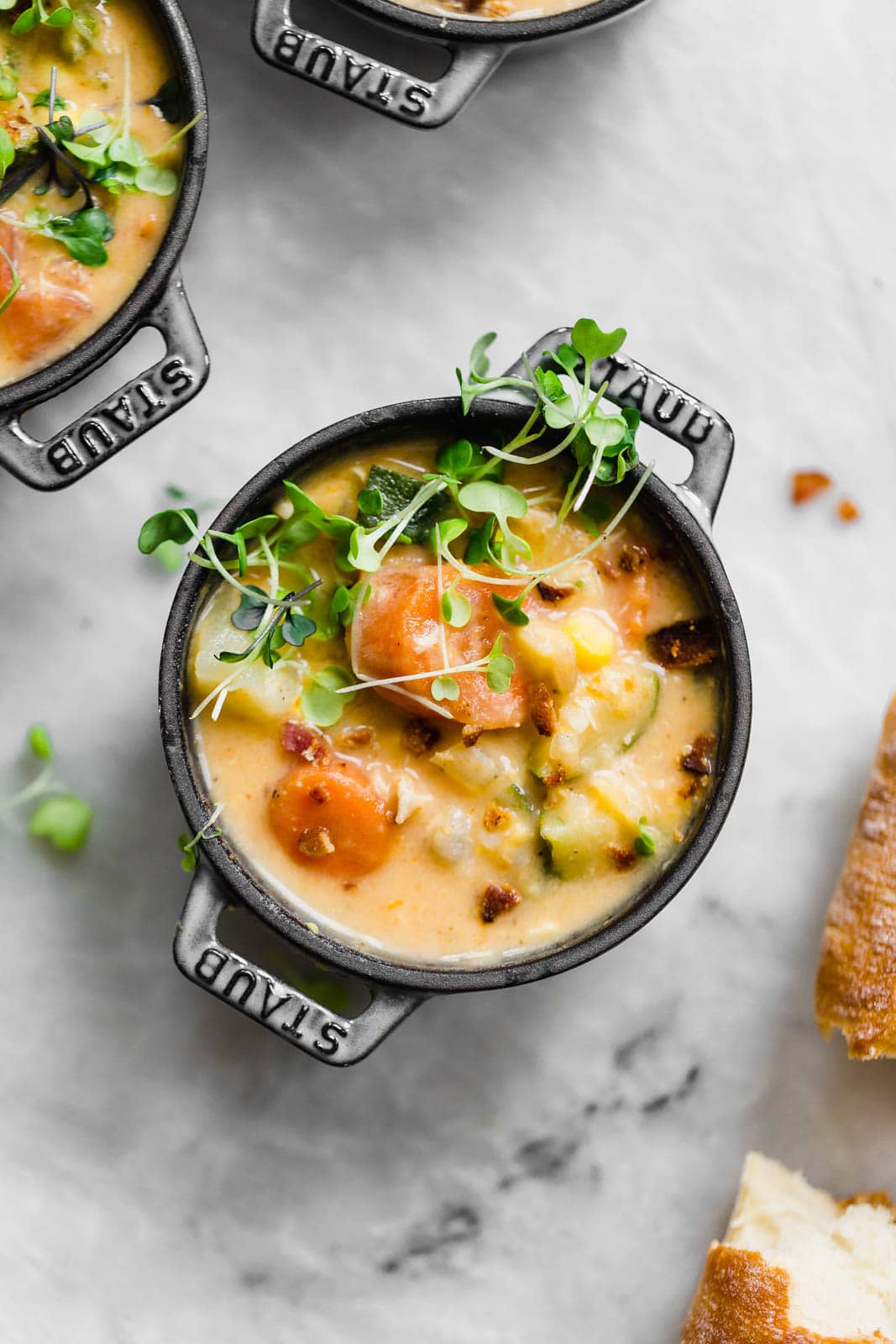 This, to me, was a reminder how much I am influenced by my environment. And how much being in a cluttered space can clutter your mind.

I’m going to really try in the next few weeks to keep my home as clean and clutter-free as it can be. And I encourage you to do the same. Next time you walk into your house and take off your jacket, take the extra 10 seconds to hang it up instead of tossing it onto the couch. When you instinctively want to kick off those shoes and leave them in the hallway, don’t! Put those babies away. Because I’m sure if you do you’ll find yourself feeling better about your space and environment, and in turn, your mental state will benefit! 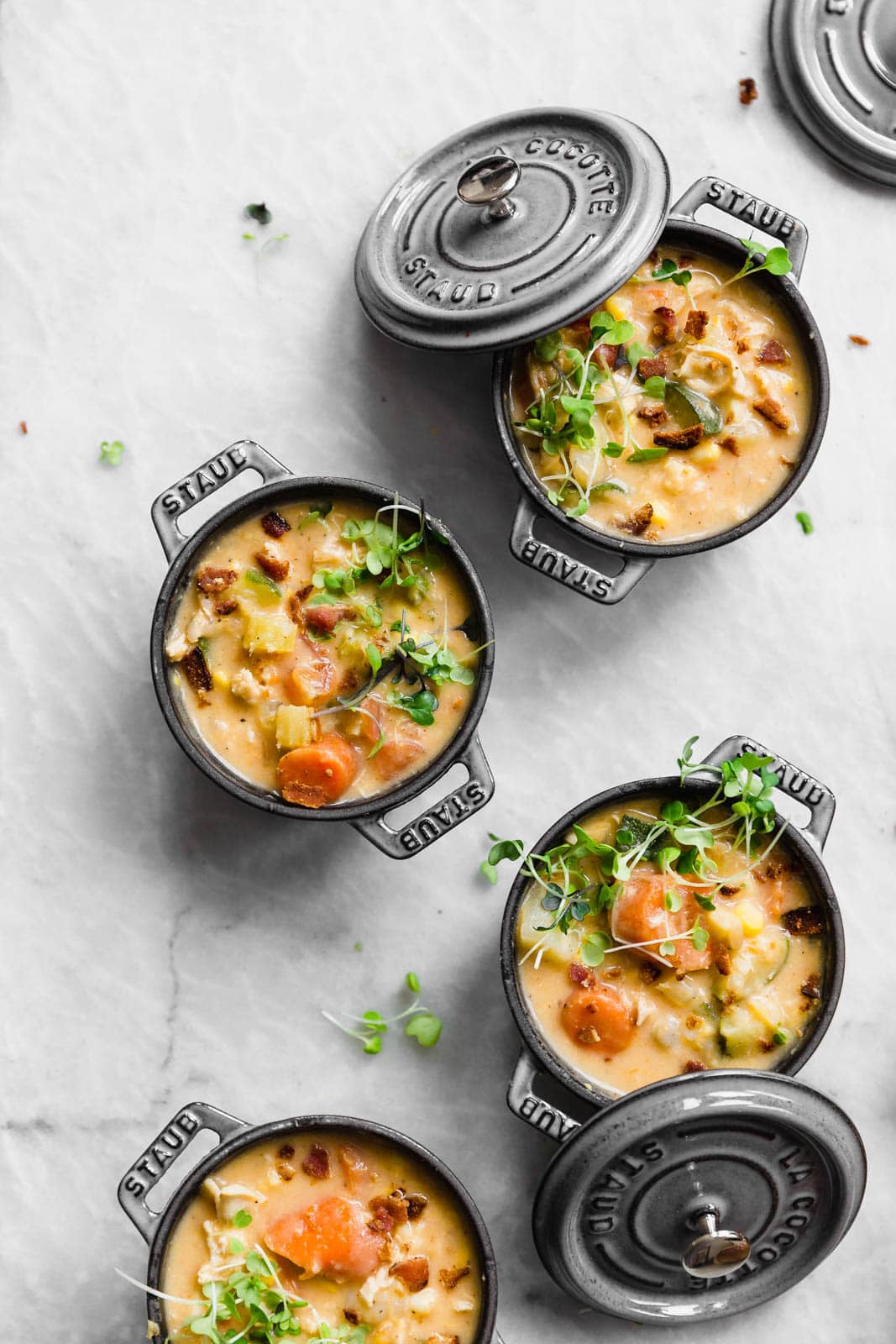 Tips on how to make chicken corn chowder

This creamy chicken corn chowder is a breeze to make (you pretty much just dump everything into a pot and walk away), but there are a few things to keep in mind when making a batch of this soup.

Don’t use cooking wine — You want to use legit white wine in this chicken corn chowder, not cooking wine. Cooking wine has a different flavor to it and typically isn’t good quality. If you don’t want to drink the remaining white wine with your chowder, try freezing it in an ice cube tray for future recipes.

Don’t salt without tasting it first — You’ll notice that this chowder recipe doesn’t call for salt. That’s because the chicken stock I used was already salted. If your stock isn’t salted or you just like your soups salty, give this chowder a taste after it’s been simmering for a while and then add salt if needed. 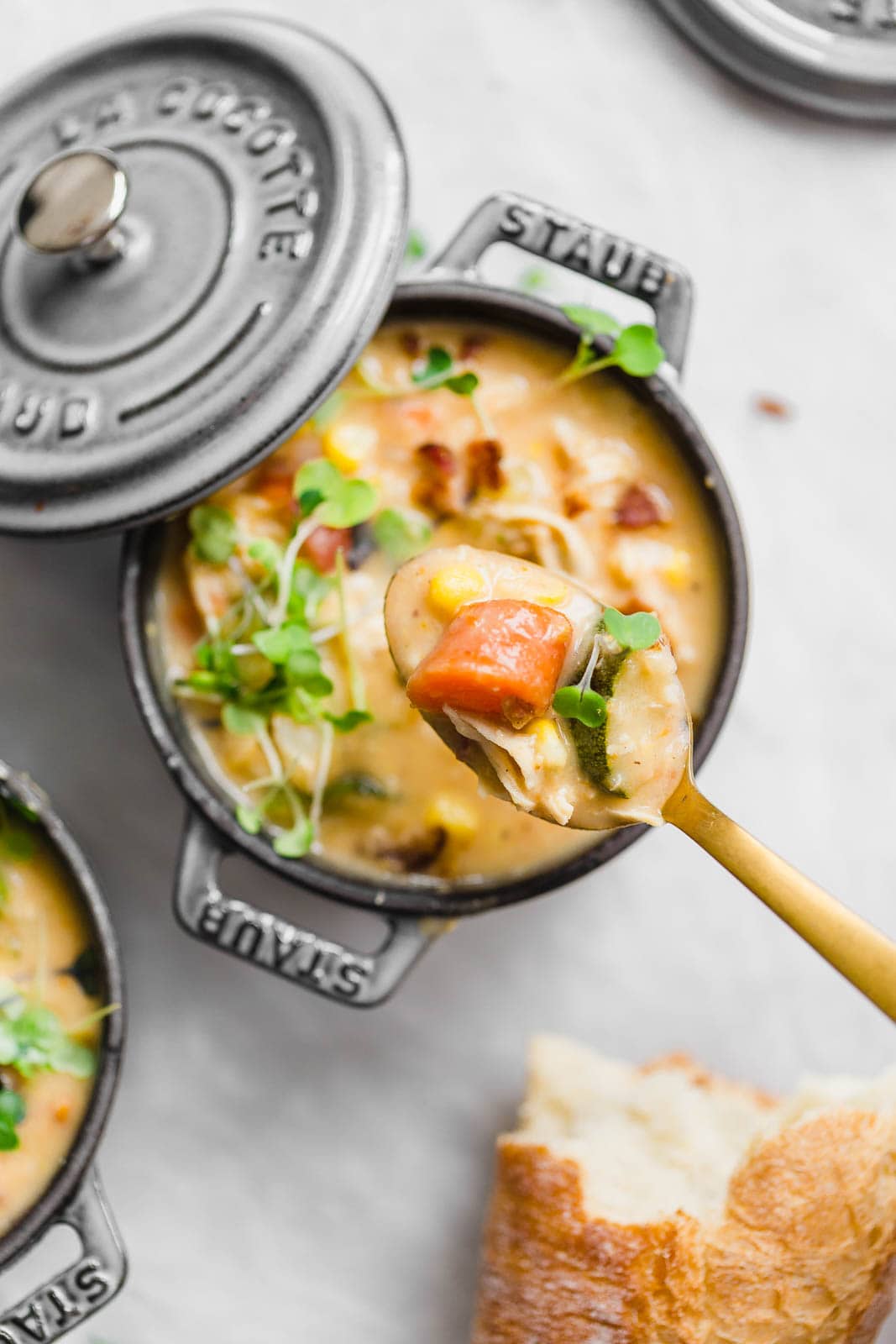 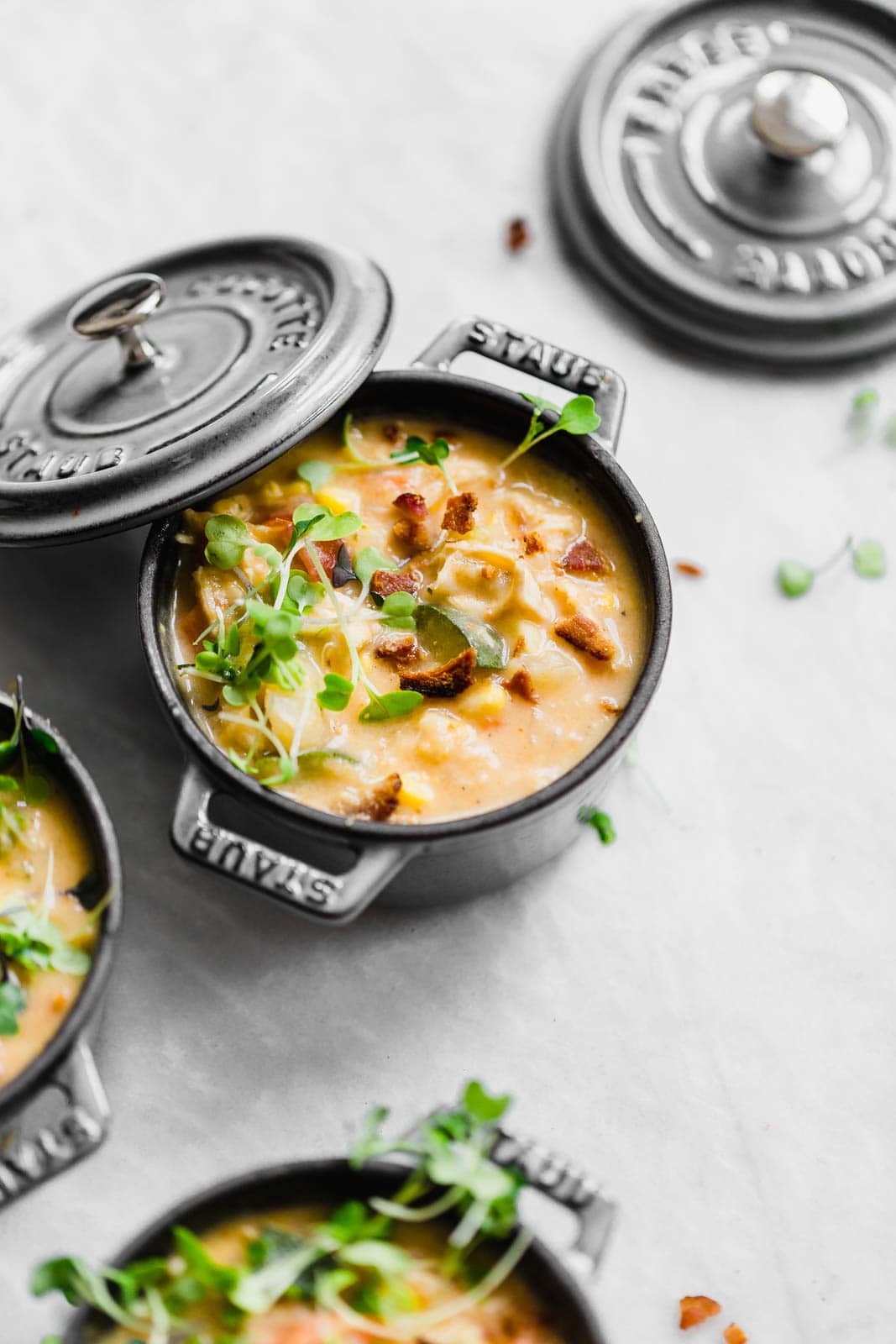